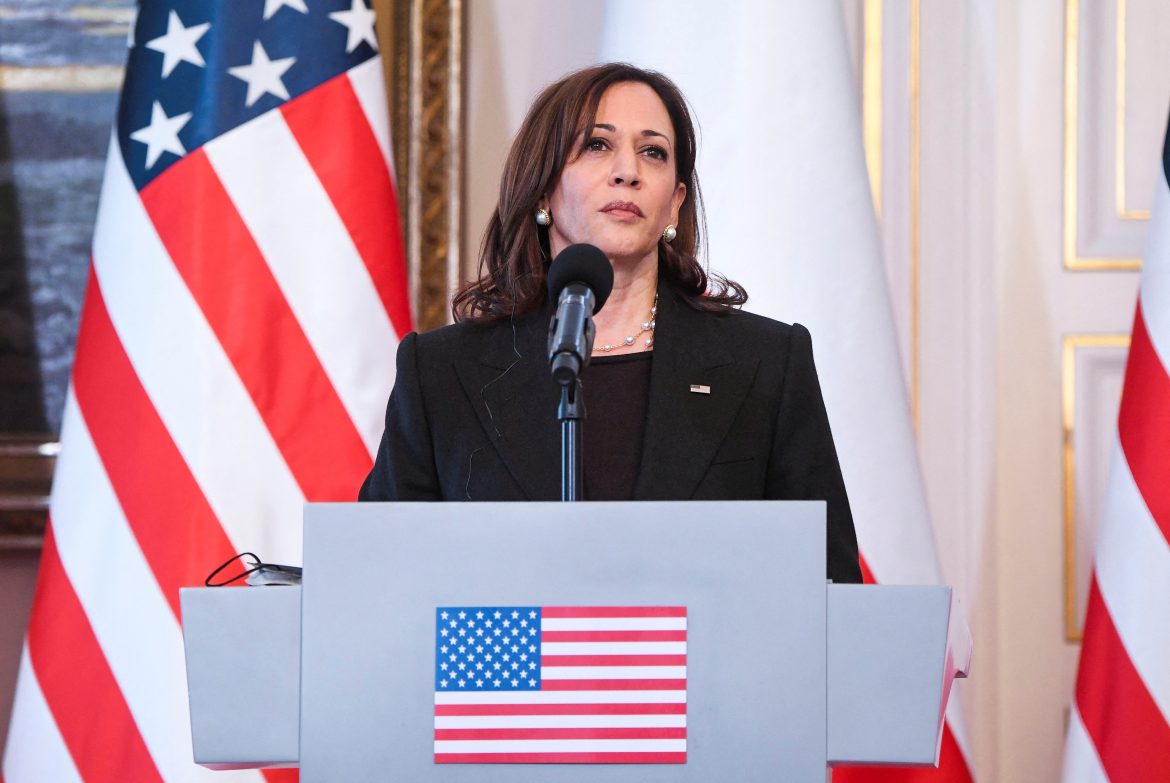 Vice President Kamala Harris and Polish President Andrzej Duda agreed that the United States and Poland are “unified” during a joint press conference in Warsaw today. Harris arrived in Poland Wednesday for a prearranged meeting with Duda to offer reassurances of U.S. support for Poland, but tension surrounding a very public communication breakdown that occurred between the two NATO allies the day prior hung unspoken in the air.

The Biden administration was taken off guard this week when Poland announced it would provide Ukraine with requested MiG-29 fighter jets, along with the proposal that the transfer take place at the U.S. air base in Ramstein, Germany – an offer the U.S. soundly rejected. Poland had proposed giving all of its Soviet-era MiG-29s to the U.S. to shore up Ukraine’s air force and, in exchange, hoped for the opportunity to purchase American F-16s to upgrade its own arsenal of warplanes.

Harris and Duda appeared to gloss over any resulting tension by presenting a united front, with both leaders stressing that the relationship between the United States and Poland has “become even stronger” since Russia invaded Ukraine Feb. 24, according to AP and Fox News reports. The Vice President referred to her visit to Poland as “an expression of the enduring and important relationship between the United States and Poland that again has been long standing, but in particular on the issue of Ukraine is unified and is clear.”

When asked by reporters whether Poland “unilaterally” extended the warplane offer to Ukraine, Duda said the proposal was made in the best interests of NATO.

“There is a fight going on for independence, for sovereignty, for freedom and for survival and support with all the strength we have for the people of Ukraine,” Duda said. “It is not only in the military, also the people of Ukraine have taken up arms to defend their homeland. It’s not only men, it’s also women fighting on the front line with men in order to defend their country,” the President continued, adding that Ukraine has “the right to demand this assistance from the international community.” Ukrainian President Volodymyr Zelenskyy has pleaded with Poland and the U.S. to provide the warplanes as Russian attacks have become increasingly brutal each day.

The subject of Ukraine’s allegations that Russia has committed war crimes against Ukrainian civilians also came up during the joint briefing. Harris expressed outrage over “atrocities” committed by Russian forces against civilians, including Wednesday’s horrific attack on a maternity hospital in Mariupol. The Vice President said she supported an investigation into the war crime allegations, though she stopped short of directly acknowledging such crimes have been committed.

“Absolutely there should be an investigation, and we should all be watching,” said Harris, noting that the United Nations has already started a process to review allegations, according to Reuters. “I have no question the eyes of the world are on this war and what Russia has done in terms of this aggression and these atrocities.”

Duda took a much stronger stance. “It is obvious to us that in Ukraine Russians are committing war crimes,” he said, adding that he believes the invasion is “bearing the features of a genocide — it aims at eliminating and destroying a nation.”

Later, Harris reiterated that the U.S. is committed to working with Poland “in partnership, in solidarity, to support what is necessary at this very moment in terms of the humanity and security needs of Ukraine and the Ukrainian people.”

“I want to be very clear: The United States and Poland are united in what we have done and are prepared to do to help Ukraine and the people of Ukraine — full stop,” the Vice President said before highlighting Congress’ vote this week to send $13 billion in aid to Ukraine and European allies.

One particular exchange between Harris and Duda drew ridicule from some of the Vice President’s critics. In response to a reporter’s question about Ukrainian refugees, Harris and Duda looked at one another for a moment, as though both wanted the other to respond. Harris then said, “Okay,” and began to chuckle, adding “A friend in need is a friend indeed,” at which point her laughter grew louder.

“Only Kamala Harris would find it appropriate to laugh when talking about the topic of Ukrainian Refugees,” tweeted Conservative media personality and podcaster Benny Johnson.

Imagine being the Polish translator that has to interpret this Kamala Harris nightmare soup pic.twitter.com/SnekyOOZEa

Watching Kamala Harris speak in Poland. She is "over her head" and not competent to represent America!

Harris later met with seven Ukrainian refugees who fled to Poland, praising them for their bravery.

“We are here to support you, and you are not alone,” Harris told the group. “And I know there’s so much about the experience that you’ve had that has made you feel alone. You are not alone. We around the world are watching.”

Earlier in the day, the Vice President met with Polish Prime Minister Mateusz Morawieck, taking the opportunity to praise the generosity of the Polish people for welcoming in nearly 1.5 million Ukrainian refugees.

“I’ve been watching or reading about the work of ordinary people doing extraordinary things, and so I bring you thanks from the American people,” Harris said.

The Vice President is expected to meet this afternoon with Canadian Prime Minister Justin Trudeau, who has been meeting with European leaders this week to discuss the situation in Ukraine.