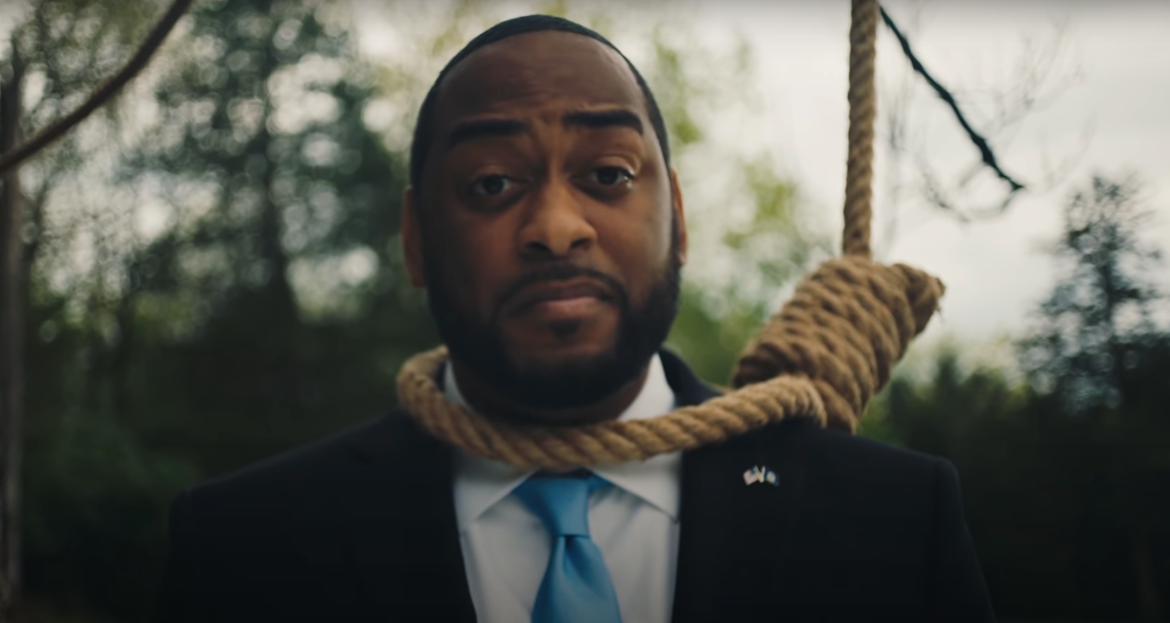 In a provocative midterm election ad, Kentucky U.S. Senate Candidate Charles Booker (D), discusses the state’s history of lynching while wearing a noose around his neck.

Booker, who is the first black man to receive the Democratic nomination for the U.S. Senate in Kentucky, uses the strong imagery as an attempt to smear his opponent, sitting Senator Rand Paul (R), as racist for blocking a federal anti-lynching law in 2020.

In this historic election, the choice is clear. Rand Paul may want to divide us, but hate won’t win this time.

The campaign ad, titled “Pain of our Past,” begins with a content warning, informing viewers that the video contains “strong imagery” and that “viewer discretion is advised.”

“My opponent?” Booker says, referring to Paul. “The very person who compared expanded health care to slavery. The person who said he would have opposed The Civil Rights Act. The person who single-handedly blocked an anti-lynching act from being federal law.”

While Booker does not tell any lies in his ad, he purposefully hand-picks facts without providing much needed context to promote a sensational narrative that is misleading at best.

In 2020, as racial tension simmered following the death of George Floyd, Paul held up a bill that would have designated lynching as a federal hate crime. He did so over concerns that the bill’s language could “conflate someone who has an altercation, where they had minor bruises, with lynching.” Paul said at the time he wanted revisions to “make the language the best that we can get it.”

This year, Paul cosponsored a revised version of the same law, which passed the Senate unanimously.

Paul’s deputy campaign manager, Jake Cox, said in a statement that Booker’s ad is “a desperate misrepresentation of the facts.”

Regarding The Civil Rights Act, in 2010 Paul said told the Courier-Journal that he likes the 1964 legislation “in the sense that it ended discrimination in all public domains, and I’m all in favor of that,” but said he believes it tramples on rights of private business owners.

Booker’s ad also references remarks Paul made in 2011 at a Senate HELP Subcommittee on Primary Health and Aging when he said believing in “a right to health care” means “you believe is slavery.”

Booker ends his ad asking “Do we move forward together? Or do we let politicians like Rand Paul forever hold us back and drive us apart?” After removing the noose from his neck Bookers concludes saying, “​​In November, we will choose healing.”

Botched census gives Dems edge in 2024 and beyond

Accused Buffalo shooter to be arraigned on domestic terrorism, 24 other counts