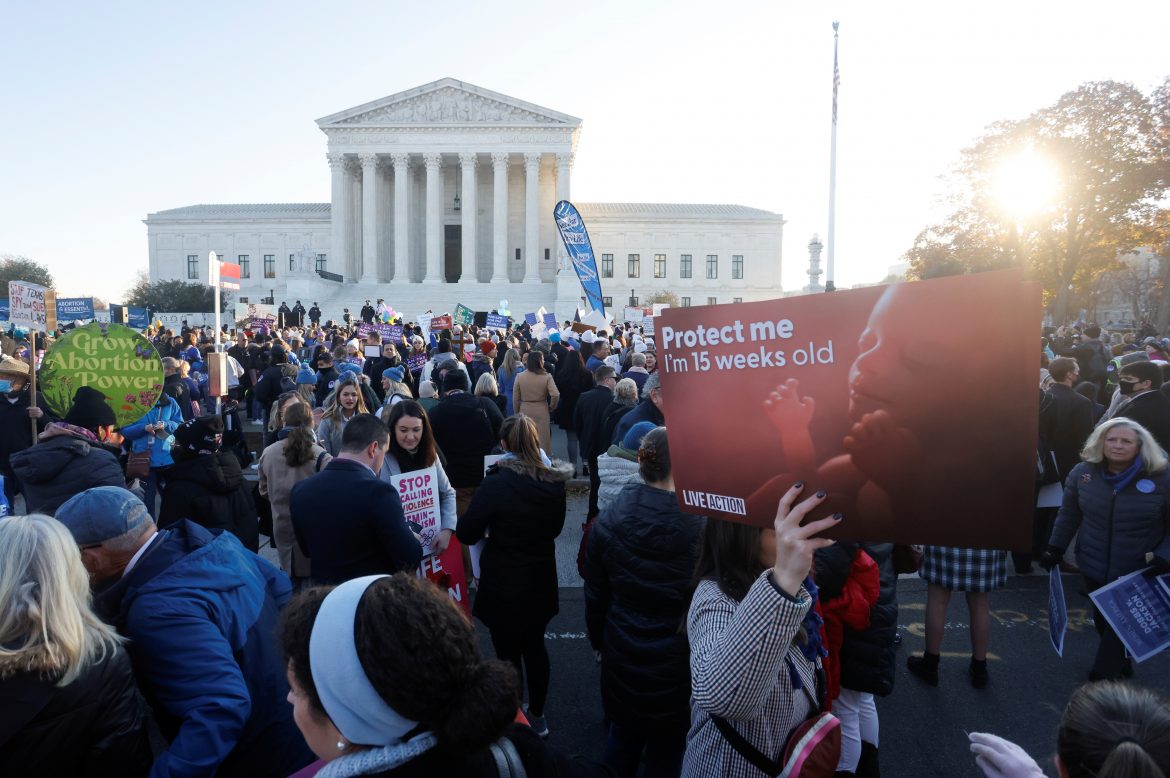 Questions posed by Supreme Court justices Wednesday, in what is perhaps the most consequential abortion rights case to date, appear to signal a willingness to roll back, though likely not abolish, Roe v. Wade.

Dobbs v. Jackson Women’s Health has implications for two perduring Supreme Court precedents, Roe v. Wade and Planned Parenthood v. Casey, both of which place significant limitations on the power of individual states to ban or limit abortions. In the case at hand, the State of Mississippi is asking the court to overturn a lower court ruling that blocked a law banning abortions after 15 weeks.

The number of pro- and anti-abortion activists gathered outside the Supreme Court Wednesday spoke to the enormity of what is at stake in the case; namely, the fundamental issue of the sanctity of life and the court’s reliance on past abortion rulings. Many pro-life advocates believe decades old abortion law precedent has been weakened by advancements in prenatal science, specifically in terms of how it bears up under scrutiny through a Constitutional lens.

The Mississippi law bans abortions after 15 weeks of pregnancy, with some exceptions. A lower court, however, agreed with pro-abortion attorneys. Their decision struck down the Mississippi law, saying it broke decades-old legal precedent that prohibits states from banning abortion before 24 weeks, which is when a fetus has historically been considered “viable.”

The Supreme Court heard arguments in the case yesterday, after the State of Mississippi petitioned that the lower court’s decision be overturned.

Analysts quickly honed in on significant takeaways from yesterday’s hearings that provide hope for pro-life advocates. Perhaps the most notable signal that Roe could be in jeopardy came in the form of questioning by the court’s conservatives, who hold a six-member majority on the bench, according to Reuters and Fox News reports.

Chief Justice John Roberts initially showed some reluctance to overturn Roe on the basis that it will likely open the door to any number of future, related cases being brought before the Supreme Court:

There are a lot of cases around the time of Roe, not of that magnitude, but the same type of analysis, that went through exactly the sorts of things we today would say were erroneous. If we look at it from today’s perspective, it’s going to be a long list of cases that we’re going to say were wrongly decided.”

Mississippi Solicitor General Scott Stewart, arguing the case for the State of Mississippi, replied that “other controversial areas, or once-controversial areas, are quite settled, clear rules, and don’t have those considerations against them,” adding that it is unlikely that the court will “have to go down that road.”

Later, however, Roberts grilled pro-abortion lawyers representing Jackson Women’s Health, asking why 15 weeks shouldn’t be enough time for a woman to decide to have an abortion:

If you think that the issue is one of choice — that women should have a choice to terminate their pregnancy — that supposes that there is a point at which they’ve had the fair choice, opportunity to choose. And why would 15 weeks be an inappropriate line? Viability, it seems to me, doesn’t have anything to do with choice. But if it really is an issue about choice, why is 15 weeks not enough time?”

Julie Rickelman, an attorney representing the Center for Reproductive Rights, responded that if the court permits reinstatement of the Mississippi law, it will create a “slippery slope” that opens the gate for even more restrictive abortion laws.

“The state has conceded that some women will not be able obtain an abortion before 15 weeks, and this law will bar them from doing so,” she argued. “Without viability, there will be no stopping point. States will rush to ban abortion at virtually any point in pregnancy.”

Roberts countered that most countries ban abortions after 15 weeks, pointing out that the United States is one of few countries, including North Korea and China, that permits abortions later in pregnancy.

Justice Samuel Alito also sharply questioned Rickelman over the logic of using viability as a legal threshold for abortion, saying the line of reasoning “doesn’t make any sense” and is, at best, an “arbitrary” standard. He also significantly noted that a woman may want to abort her baby even after viability is established, but that a “fetus has an interest in having life” no matter how its viability is categorized.

“In some people’s view it doesn’t, your honor” Rikelman replied. “It is principled because in ordering the interests at stake, the court had to set a line between conception and birth.”

Justice Brett Kavanaugh also offered a potentially telling glimpse into how he may rule in the case during a tense exchange with Justice Stephen Bryer on the subject of overturning “stare decisis” (legal precedent) of Roe. Breyer asked the State of Mississippi attorney why the Supreme Court should disregard stare decisis, after which Kavanaugh took up the argument by citing examples of cases in which rulings were overturned:

History tells a somewhat different story, I think, than is sometimes assumed. If you think about some of the most important cases in this court’s history … there’s a string of them where the cases overruled precedent.”

Justice Amy Coney Barrett undercut the need for abortions by pointing out that 50 states offer “safe haven laws” through which a woman may leave a baby at designated locations for later adoption without penalty.

Additionally, Kavanaugh several times questioned whether the Supreme Court should be involved in cases like Dobbs at all:

Why should this court be the arbiter rather than Congress, the state legislatures, state supreme courts, the people, being able to resolve this? And there’ll be different answers in Mississippi than New York, different answers in Alabama than California, because they’re two different interests at stake and the people in those states might value those interests somewhat differently.

Arguments concluded around noon Wednesday. A decision is expected sometime this spring.

Poll: Many Catholics and Mainline Protestants claim belief in God is not necessary to enter heaven