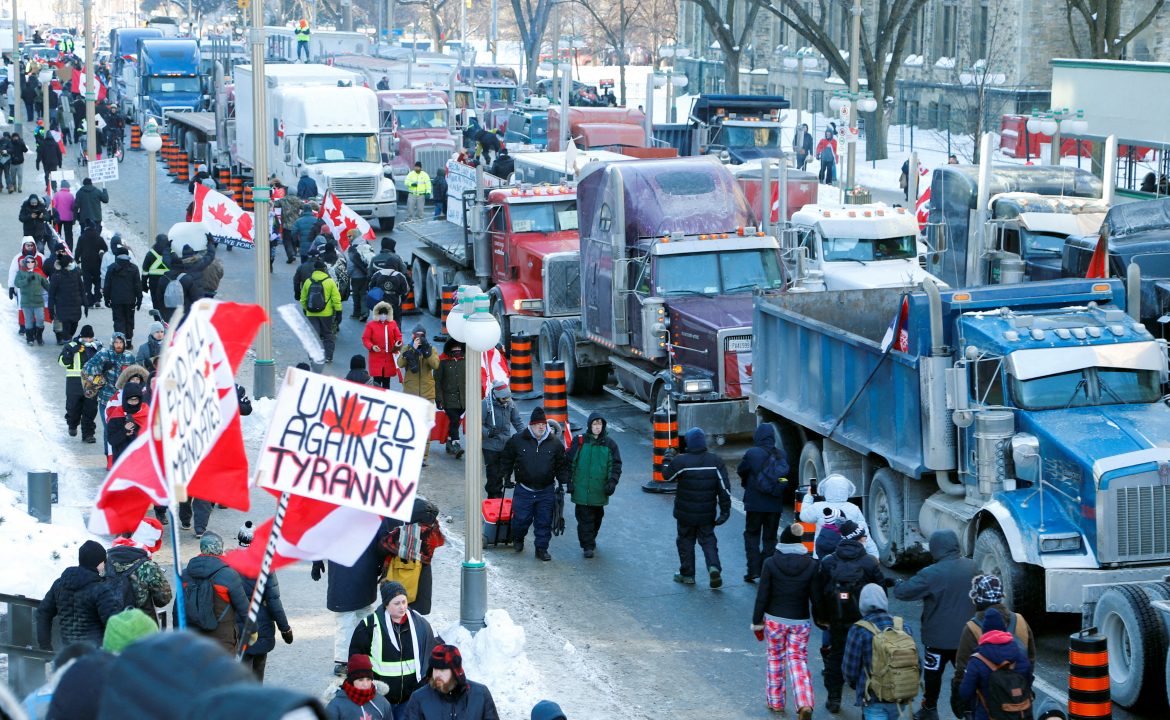 Canadian Prime Minister Justin Trudeau was shuttled off to an “undisclosed location” by his security detail on Saturday as a sea of protesters stood shoulder to shoulder in Ottawa.

Thousands of people had converged in Canada’s capital city over the weekend to protest the stringent COVID-19 mandates Trudeau had instituted saying they had a harmful effect on Canada’s working class. The “Freedom Convoy,” which prompted the protests, was organized by Canadian truck drivers fighting back against newly imposed vaccine requirements that would force some 16,000 unvaxxed cross-border truckers to take the jab in order to continue to earn a living.

Ahead of the rally, Trudeau dismissed the protesting truckers as “small fringe minority” with “unacceptable views,” but as tens of thousands of drivers made their way toward the capitol, the convoy quickly amassed a monumental groundswell of support from people fed up with a heavy-handed governance.

This is the scene in Ottawa as the Trucker Freedom Convoy makes their arrival.

So much for “small fringe minority”. pic.twitter.com/uHe5KRBEaX

Thousands of Canadian citizens ignored frigid temperatures to gather along the convoy’s route, cheering and waving signs in support of the truckers who embarked on their journey Tuesday.

The trucker freedom convoy is greeted by supporters in Salmon Arm, BC, Canada as it makes it’s way to Ottawa to protest mandates. pic.twitter.com/nSPtPOh9kv

Others expressed their solidarity with the truckers in more creative ways, including a 76-year-old Ontario woman who worked around the clock baking muffins for the drivers and a woman from Alberta who created “Freedom Convoy 2022” t-shirts and hoodies emblazoned with the words “Thank you, truckers,” according to reporting by the New York Post. A GoFundMe account for the cause garnered nearly $10 million in donations.

News of the planned protest gained international attention, particularly in America, with notables like Elon Musk and Joe Rogan voicing support for the truckers. Former U.S. President Donald Trump, speaking at a rally in Texas on Saturday, praised the Canadian protesters for “resisting bravely these lawless mandates.”

As the convoy reached Ottawa on Saturday, protesters packed the streets and sidewalks surrounding the capital’s parliament buildings and called for an immediate end to the mandates. No issues of violence were reported, in keeping with promises made by organizers that the rally would be peaceful, and no arrests were made.

The Ottawa Police Service, however, said it is investigating “multiple cases of disruptive, inappropriate and threatening behavior from demonstrators” in a statement. The OPS also claims it incurred over $800,000 per day in costs as a result of the “well-funded, major demonstration.” The statement also refers to “social costs” of the protest. One protester sparked outrage when he was filmed dancing on a war memorial outside of parliament.

The rally spilled over into Sunday, with many truckers vowing to remain at the capital, until the mandates are lifted. Meanwhile, other truck drivers and protesters purportedly blocked a Canada-U.S. border crossing in southern Alberta in support of the Freedom Convoy, according to Reuters.

Canada’s conservative leader Erin O’Toole said he supported protesters’ “right to be heard” in a tweet and called on Trudeau “to meet with these hard-working Canadians to hear their concerns.” O’Toole previously said that the rally “is a sign of the fatigue in our country right now.”

Podcaster Joe Rogan responds to protests against his Spotify show