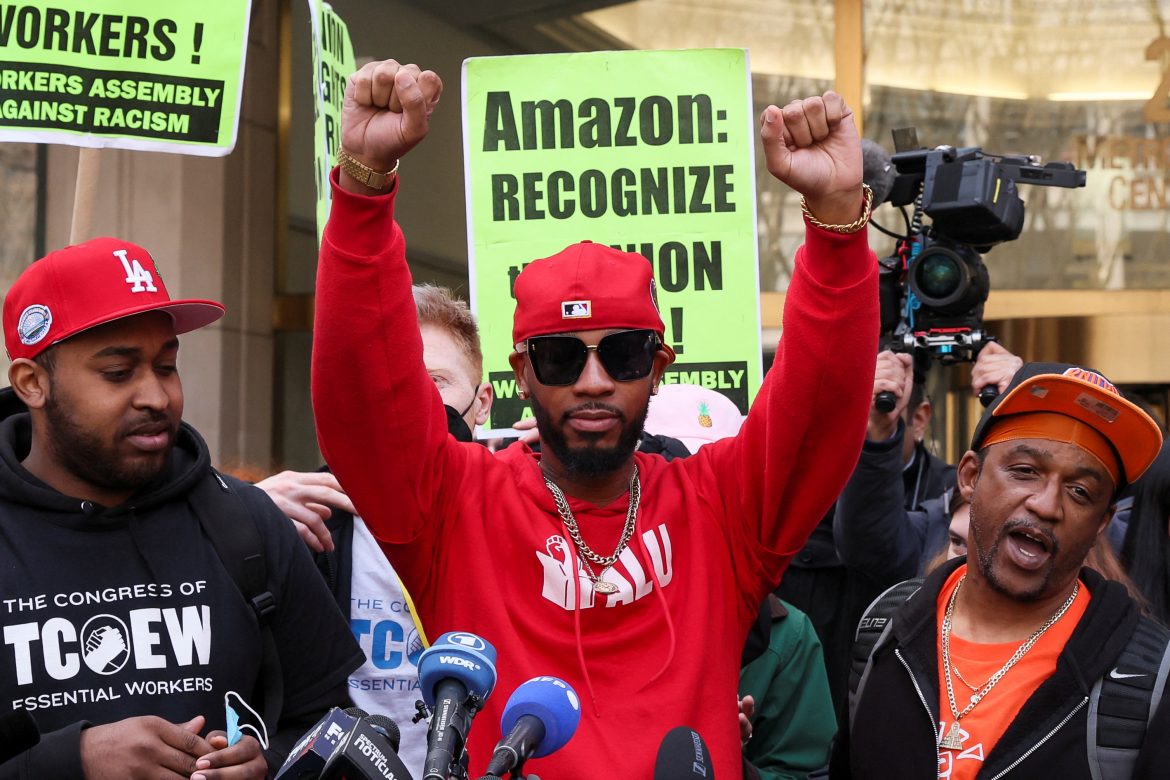 Workers at an Amazon.com Inc warehouse in New York City voted to form the first union at the second-largest U.S. private employer, a victory that adds to recent grassroots successes by labor activists pushing into new industries.

Employees at the online retailer’s fulfillment center in the borough of Staten Island, known as JFK8, secured a majority by voting 2,654 to 2,131 in support of the Amazon Labor Union (ALU), or about 55% in favor, according to a count released on Friday by the National Labor Relations Board (NLRB).

The vote represented a victory for U.S. organized labor and a milestone for labor advocates, who for years have considered Amazon‘s labor practices a threat to workers. Union organizer Christian Smalls, dressed all in Amazon Labor Union red, raised a hand in victory after the win, while ALU members popped champagne in celebration.

“We’re disappointed with the outcome of the election in Staten Island because we believe having a direct relationship with the company is best for our employees,” Amazon said in a statement.

The company added that it is evaluating options including filing objections based on what it called inappropriate and undue influence by the NLRB. A spokesperson for the NLRB noted that it is an independent federal agency and said its actions have been consistent with its congressional mandate.

Assuming the vote clears any objections and the union is certified by the NLRB as representing employees, union negotiators would still have to bargain with Amazon in order to deliver on expectations of better compensation and working conditions.

Geebah Sando, a package sorter who voted for the union after working more than two years at JFK8, said he was thrilled.

“With the union together, we are united,” Sando said, adding that the labor group could help workers advocate for better pay, break and vacation time.

Many doubted Smalls when he announced plans to unionize JFK8 last year, but he set up a tent outside the warehouse while supporters in the building touted how a union could demand higher wages, safer conditions and job security.

Amazon was founded in 1994 as a small virtual bookstore by now-billionaire Jeff Bezos. The company in mid-2021 said it had just under a million U.S. employees, and it now has a market capitalization of about $1.7 trillion.

Walmart Inc, the No. 1 U.S. private employer, has nearly 1.6 million U.S. employees, and is not unionized.

Dan Cornfield, a labor expert and professor of sociology at Vanderbilt University, called the vote a “momentous victory for working people who are doing homegrown union organizing.” Cornfield said he expects the win to accelerate the already rapidly growing labor activism across the U.S. retail sector.

“It’s almost like a David and Goliath type of victory,” Cornfield said. “There’s already a wave [of activism] occurring, and this will encourage more of that.”

“A free and fair choice”

U.S. President Joe Biden was glad to see Amazon workers’ voices were heard, White House Press Secretary Jen Psaki said. Psaki added that Biden believes that “every worker in every state should have a free and fair choice to join a union” and that Amazon workers on Staten Island “made their choice to organize a grassroots union, bargain for better jobs and a better life.”

Other recent labor drives are picking up momentum. Nine U.S. Starbucks stores have voted to organize, with more than 150 more seeking elections.

At an Amazon facility in Alabama, by contrast, a majority of workers rejected unionization, though the outcome was not final.

The Alabama contest could hinge on 416 challenged ballots to be adjudicated in the coming weeks, which are sufficient to change the result, the NLRB said. The situation is far different from last year when workers sided with Amazon by a more than 2-to-1 margin against unionizing.

Amazon workers responded to more in-person outreach by labor activists as the pandemic subsided. A second company warehouse in Staten Island, LDJ5, will also vote on whether to unionize starting on April 25.

The number of employees eligible to participate in the Staten Island vote was 8,325, the NLRB said.