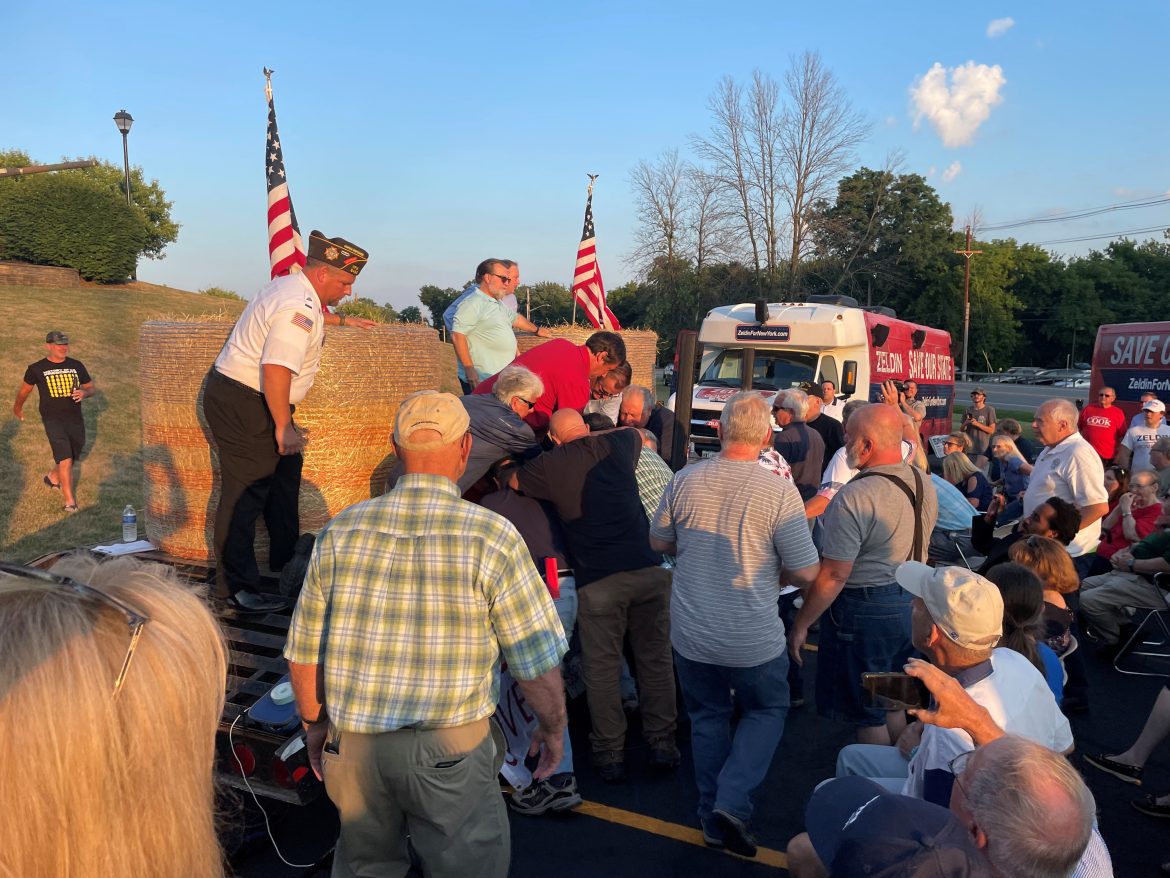 Video from the scene showed the attacker came on stage while Zeldin was speaking at the Veterans of Foreign Wars post in Perinton, New York. The assailant told Zeldin “you’re done,” before grabbing the candidate and trying to stab him with a knife-like weapon styled like a cat’s face. The sheriff’s office said the attacker attempted to strike Zeldin’s neck.

The assailant, reportedly a 43-year-old Iraq war veteran named David Jakubonis, was wrestled to the ground by several people on the scene, including Alison Esposito, the GOP candidate for lieutenant governor, before he was able to harm Zeldin.

“Law enforcement was on the scene within minutes. The attacker will likely be instantly released under NY’s laws,” Zeldin said in a tweet describing the incited.

His words as he tried to stab me a few hours ago were “you’re done”, but several attendees, including @EspositoforNY, quickly jumped into action & tackled the guy.

Law enforcement was on the scene within minutes.

The attacker will likely be instantly released under NY’s laws. pic.twitter.com/wZEyIyrjFe

Zeldin was correct about his attacker’s impending release, with the New York Post reporting that “Jakubonis was charged with attempted assault in the second degree and released on his own recognizance.”

Zeldin’s Democratic opponent, sitting New York Governor Kathy Hochul, condemned the attack in a tweet, saying: “I condemn this violent behavior in the strongest terms possible — it has no place in New York.”

My team has informed me about the incident at Lee Zeldin's campaign event tonight. Relieved to hear that Congressman Zeldin was not injured and that the suspect is in custody. I condemn this violent behavior in the strongest terms possible — it has no place in New York.

Journalist, Andy Ngo, who specializes in reporting on political violence and extremism, responded to Hochul’s tweet by sharing a press release from the governor that he said encouraged “vigilante violence.”

“Governor, you seemed to suggest there should have been vigilante violence by inaccurately describing that campaign event as filled with ‘far-right extremists,’” Ngo said in his reply. “That is the same language and dog whistle used by Antifa militants to urge comrades to injure or kill targets.”

“‘Big Lie’ Lee and his entourage of extremists kick off the statewide ‘MAGA Republican’ Bus Tour, which will make stops across the state peddling dangerous lies, misinformation, and his far-right agenda,” Hochul’s press release reads.