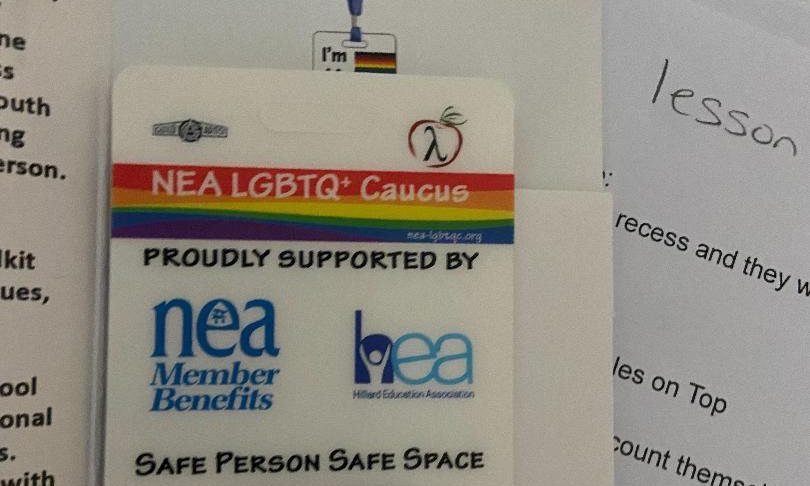 The nation’s largest teachers union has found itself in hot water over badges that further demonstrate how the organization intends to indoctrinate children into radical sexual and gender ideology, whether parents approve or not.

Teachers in Hilliard, Ohio were seen wearing badges provided by the LGBTQ+ Caucus and the local branch of the National Education Association to show they were a “safe space” for students who identify as LGBTQ. The badges however did much more than that, as they contained a QR code, which directed users to “LGBTQ-friendly websites and resources” according to a report from NBC 4 in Columbus, Ohio.

One of those resources, Teen Health Source, includes a document that provides explicit instructions on numerous sex acts, formatted as though they are recipes in a cookbook. (FISM News is not providing a link to the document due to its sexually explicit nature.)

Journalist Christopher Rufo of the Manhattan Institute helped bring the disturbing story to light on Twitter.

He continued with an explanation that defies both logic and the fact that the resources’ clearly stated its intended audience.

“The QR code on the back of the badge is not there to be shared with students; rather, it is provided to adults by the NEA should they be interested in learning more about LGTBQ+ issues and supporting LGBTQ+ students. Any teacher who chose to wear one of the badges clearly understood that the resources at the link were intended for adults, not students.”

Despite this explanation, the badges are designed to be worn on a lanyard — which allows for the badge to hang freely — while the teachers are in the presence of students. The common result of this is that either side of the badge may be exposed to anyone around, regardless of the wearer’s intent.

Stewart went on to claim that the QR code and the linked resources are only for adults, despite the fact that the explicit website at issue is titled “Teen Health Source.”

The explanation did not quell the anger of parents who are demanding answers from school leadership and expressed outrage at a school board meeting on Monday.

“It’s important to know if my 9-year-old daughter is going to go up to a male ‘safe’ person and read about…I mean I won’t read some of the stuff. I am embarrassed to actually share it with my mom who is with me,” one concerned parent stated. “If a male student came to my 9-year-old daughter [and shared this content] I would file a suit against that person. I don’t want my child to be exposed to even a measure of that at school.”

“Columbus attorney Joshua Brown sent a letter to district Superintendent Dave Stewart on August 15 that gave the district 30 days to respond after which Brown threatened to sue. The letter was the result of parents who came forward following a July conversation between a few of them and the superintendent about Title IX changes in which Stewart purportedly said a teacher would be putting his/herself at great potential risk if the teacher would ‘out a kid’ to their parents without a child’s permission,” The Ohio Press Network  (OPN) reported.

A group of parents has demanded Hilliard City Schools answer their questions by October 17 about how the district handles gender and sex-related conversations with students, or the parents will sue the district in federal court.

I am a parent of 3 boys and I live in chillicothe Ohio. I also happen to be bisexual and even I am opposed to this garbage being pushed and peer pressured onto our kids and you know that is exactly what is happening. It is hard being a kid, straight or gay, having clearly biased teachers more worried about talking to them about sex than intellectual things is way more harmful than helpful. This needs to stop.