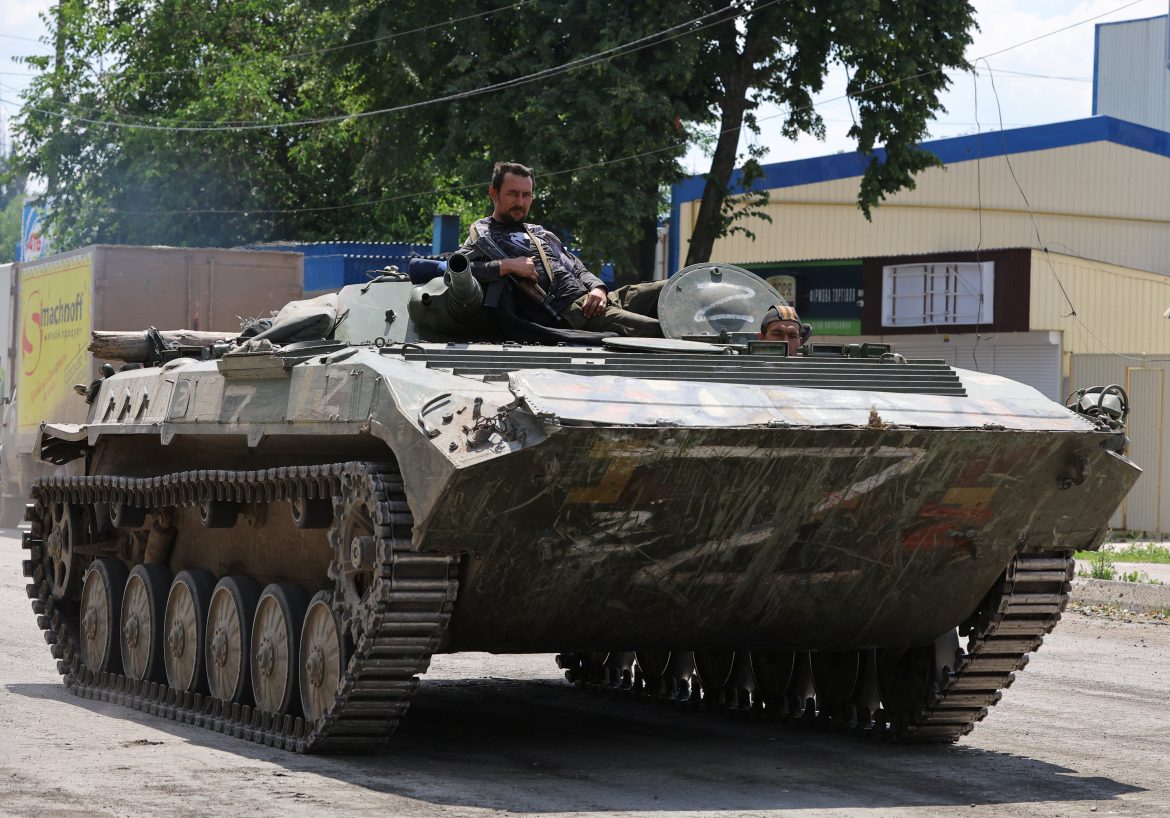 Russian President Vladimir Putin on Monday praised his military units for wresting control of Lysychansk from the last remaining stronghold of Ukrainian forces in Luhansk the day prior.  Putin said that the military units “that took part in active hostilities and achieved success, victory” in Luhansk “should rest, increase their combat capabilities,” as reported by The Associated Press.

Russia’s Defense Minister Sergei Shoigu advised Putin that “the operation” was completed Sunday during a televised meeting.  The region, together with the neighboring Donetsk province, comprises Ukraine’s industrial heartland of Donbas. Lysychansk’s capture signals a major victory for Moscow.

Luhansk governor Serhii Haidai said on Monday that Ukrainian forces withdrew from the city when it appeared that they were almost completely surrounded by Russian troops.

“There was a risk of Lysychansk encirclement,” Haidai told the Associated Press, adding that Ukrainian troops could have held on for a few more weeks but would have potentially paid too high a price.

“We managed to do [a] centralized withdrawal and evacuate all injured,” Haidai said. “We took back all the equipment, so from this point withdrawal was organized well.”

Ukraine’s General Staff said that Russian forces have now shifted their attention to advancing toward the line of Siversk, Fedorivka, and Bakhmut in the Donetsk region.

Elsewhere, Russian shelling intensified over the weekend in Sloviansk and Kramatorsk deeper into Donetsk. Six people, including a nine-year-old girl, were killed in shelling carried out by Moscow in Sloviansk and 19 others were wounded, local authorities said.

NATO’s 30 member nations formally consented to the accession protocols for Finland and Sweden early Tuesday, advancing their membership applications to the alliance capitals for legislative approvals, though Turkey’s endorsement could face another potential snag.

Last week’s memorandum of understanding between the leaders of Finland, Sweden, and Turkey does not necessarily mean that Turkey’s Parliament will sign off on approving the membership of the Nordic nations. Turkish President Recep Tayyip Erdogan cautioned the alliance last week that Ankara could still block Finland’s and Sweden’s acceptance if the countries fail to follow through with purported promises to extradite individuals Turkey deems to be terrorists.

NATO Secretary General Jens Stoltenberg said he expects that Turkey’s Parliament will follow through with the agreement reached ahead of last week’s summit in Madrid.

“There were security concerns that needed to be addressed. And we did what we always do at NATO. We found common ground,” Stoltenberg said.

The foreign ministers of Finland and Sweden both said they will honor the memorandum with Turkey but pointed out that it did not include a specific extradition wish list.

“We will honor that memorandum and follow up on that,” Swedish Foreign Minister Ann Linde said at a Tuesday news conference, pointing out that her government’s actions would always ”comply with the Swedish legislation. We will comply with international law.”

Details of the agreement drawn up between the three countries have been kept under wraps, but Turkey has long accused Finland and Sweden of harboring Kurdish rebels and a network of individuals involved in a failed 2016 coup.

Even with Turkey’s blessing, it could take several months for Finland and Sweden to become official NATO members, given that all 30 alliance nations have their own legislative hurdles to overcome before the requisite sign-off of all members is accomplished.

The decision of historically nonaligned Finland and Sweden to seek membership in the intergovernmental military alliance underscores Russia’s strategic isolation resulting from its unprovoked war on Ukraine.