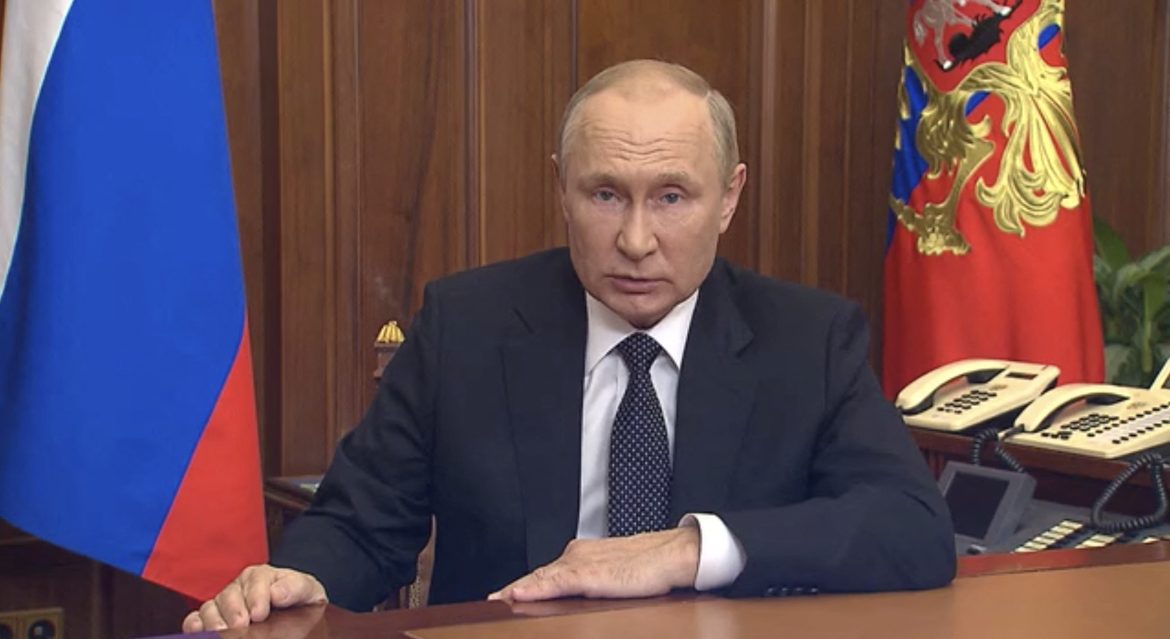 President Vladimir Putin on Wednesday again raised the specter of nuclear war with an explicit warning to the West that he is “not bluffing” on his threat to use nuclear weapons, Reuters reported.

This time, the threat is backed by new referenda to annex four Russian separatist regions, a move analysts say will lend itself to a potential justification of the use of atomic weapons under the Kremlin’s nuclear doctrine.

During a seven-minute televised speech, the Russian leader accused the West of engaging in “nuclear blackmail” and plotting to destroy his country, pointing to NATO’s recent expansion toward Russia’s borders with Sweden and Finland’s respective admissions into the military alliance. Putin further accused the U.S., U.K., and the European Union of aiding and encouraging Ukraine to advance its military operations into Russia. “The collective West,” he said, has been supplying Kyiv’s forces with advanced weapons, training, and intelligence. That much is certainly true.

“If the territorial integrity of our country is threatened, we will without doubt use all available means to protect Russia and our people,” Putin said.

“In its aggressive anti-Russian policy, the West has crossed every line,” he continued. “This is not a bluff. And those who try to blackmail us with nuclear weapons should know that the weathervane can turn and point towards them.”

“It is in our historical tradition, in the fate of our people, to stop those striving for world domination, who threaten the dismemberment and enslavement of our Motherland, our Fatherland,” Putin said. “We will do it now, and it will be so.”

The Kremlin leader spoke directly to Russian citizens, saying, “I believe in your support,” hinting at the risk Putin is taking with the new draft in an increasingly unpopular war. Russia has suffered significant military casualties in the conflict which was initially billed as a short-term “special military operation” now approaching the seven-month mark. Russian media reported a sharp spike in demand for plane tickets abroad shortly after Putin’s address, the Associated Press reported.

Military analysts suggest the move to annex Ukrainian territory is being used as a pretext for the draft and that the mobilization was more likely occasioned by Russia’s humiliating battlefield defeats in northeastern Ukraine over the past few weeks.

The formal annexation of Ukrainian territories would theoretically provide Putin with potential justification for nuclear warfare, per a provision in Russia’s nuclear doctrine that essentially allows Moscow to deploy its atomic arsenal if the country’s security is threatened by conventional weapons and/or if weapons of mass destruction are used against it.

U.S. National Security Advisor Jake Sullivan on Wednesday called the annexation referenda a “sham” during a White House briefing on the war.

“Russia is rushing to hold these referenda in response to Ukraine’s gains on the battlefield as well as to prepare for potential mobilization measures,” he said.

“These referenda are an affront to the principles of sovereignty and territorial integrity that underpin the international system and … lie at the heart of the United Nations Charter,” Sullivan continued, adding that the U.S. “will never recognize this territory as anything other than a part of Ukraine.”

“We reject Russia’s actions unequivocally. And we will continue to work with our allies and partners to impose costs on Russia and to provide historic support for Ukraine.”

Putin’s remarks came against the backdrop of a meeting of the United Nations General Assembly in New York. White House Press Secretary Karine Jean-Pierre said on Wednesday that President Biden will “offer a firm rebuke of Russia’s unjust war in Ukraine and make a call to the world to continue to stand against the naked aggression that we’ve seen these past several months” in a speech before the assembly today.

“He will underscore the importance of strengthening the United Nations and reaffirm core tenets of its charter at a time when a permanent member of the Security Council has struck at the very heart of the charter by challenging the principle of territorial integrity and sovereignty,” Jean-Pierre continued.

Ukrainian President Volodymyr Zelenskyy will also address the gathering in a prerecorded address. Putin will not be in attendance.

Pray for an end to Russia’s century-old, genocidal attacks, torture, destruction on all of its neighboring nations. Russia already succeeded in wiping out several cultures. May God restore Ukraine (and Georgia and Moldova and Belarus)