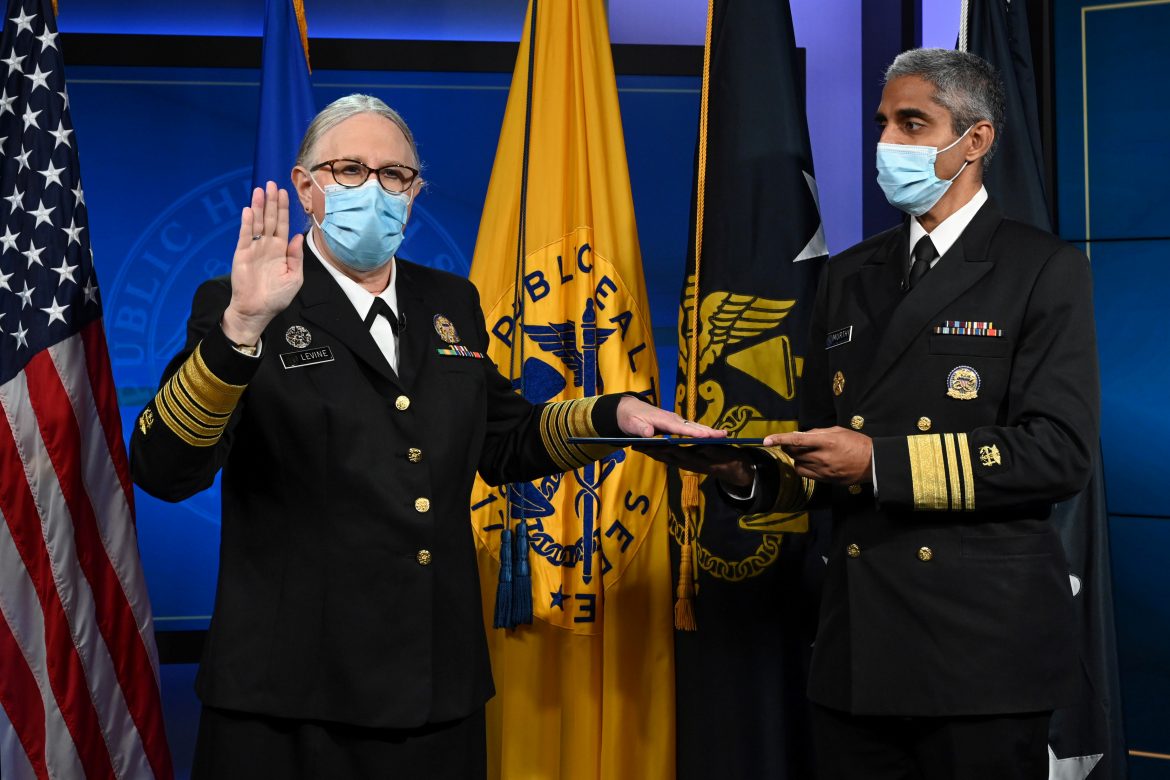 Assistant Health Secretary Rachel Levine has been sworn in as the first openly transgender officer at the four-star level in the uniformed service.

The New York Post reported that the newly-minted Assistant Health Secretary has been officially named an admiral in the US Public Health Service Commissioned Corps by Surgeon General Vivek Murthy.

“I am deeply honored & grateful to join the ranks of men & women across this great nation who have committed to defend the United States against small & large threats, known and unknown,” Levine, a biological male, tweeted upon his swearing-in. “I promise to uphold that trust to the fullest extent of my abilities.”

The Department of Health and Human Services (HHS) announced Levine’s inauguration saying that they were proud to have brought the first transgender person to a position of that prestige.

“Admiral Levine’s historic appointment as the first openly transgender four-star officer is a giant step forward towards equality as a nation. This is a proud moment for us at HHS,” department secretary Xavier Becerra said in a statement.

Becerra also touted Levine’s appointment saying new assistant secretary was “a highly accomplished pediatrician who helps drive our agency’s agenda to boost health access and equity and to strengthen behavioral health” and “a cherished and critical partner in our work to build a healthier America.”

Many are also touting Levine as the first woman to hold a 4-star ranking in the branch, despite the fact that he was born a man.

Questions about the efficacy of a transgender person in a leading role as a health officer have surged through the conservative community since Levine’s nomination months ago, but there was little that Republicans in Congress could do about the confirmation due to a lack of majority in both houses of Congress.

This leadership role is troubling to many, particularly Christians who believe transgenderism to blatantly go against God’s design for mankind and medical personnel who consider transgenderism to be part of a condition known as gender dysphoria.

The Mayo Clinic describes those with gender dysphoria as having a “preoccupation with being another gender” and says that those experiencing this phenomenon could have severe complications:

People experiencing gender dysphoria might refuse to go to school, due to pressure to dress in a way that’s associated with their sex or out of fear of being harassed or teased. Gender dysphoria (GD) can also impair the ability to function at school or at work, resulting in school dropout or unemployment. Relationship difficulties are common. Anxiety, depression, self-harm, eating disorders, substance abuse and other problems can occur.”

During his recent interview with USA Today, Levine was asked about the significance of the new appointment and the job ahead. The assistant secretary answered saying that the job is to “lead the core” of thousands of commissioned officers calling it a “significant and profound responsibility.”

And while Levine wasn’t being questioned about gender dysphoria at the time, the answer given to a question about COVID likely mirrors what many Americans, and particularly Christians, are feeling about a four-star transgendered officer being given so much authority:

We are all interconnected. What any one of us does has significant impacts upon our family, our community and our nation. So I think there is a personal responsibility people have to the common good.

When referring to this Levine dude you should use he/him not she/her. Thanks.