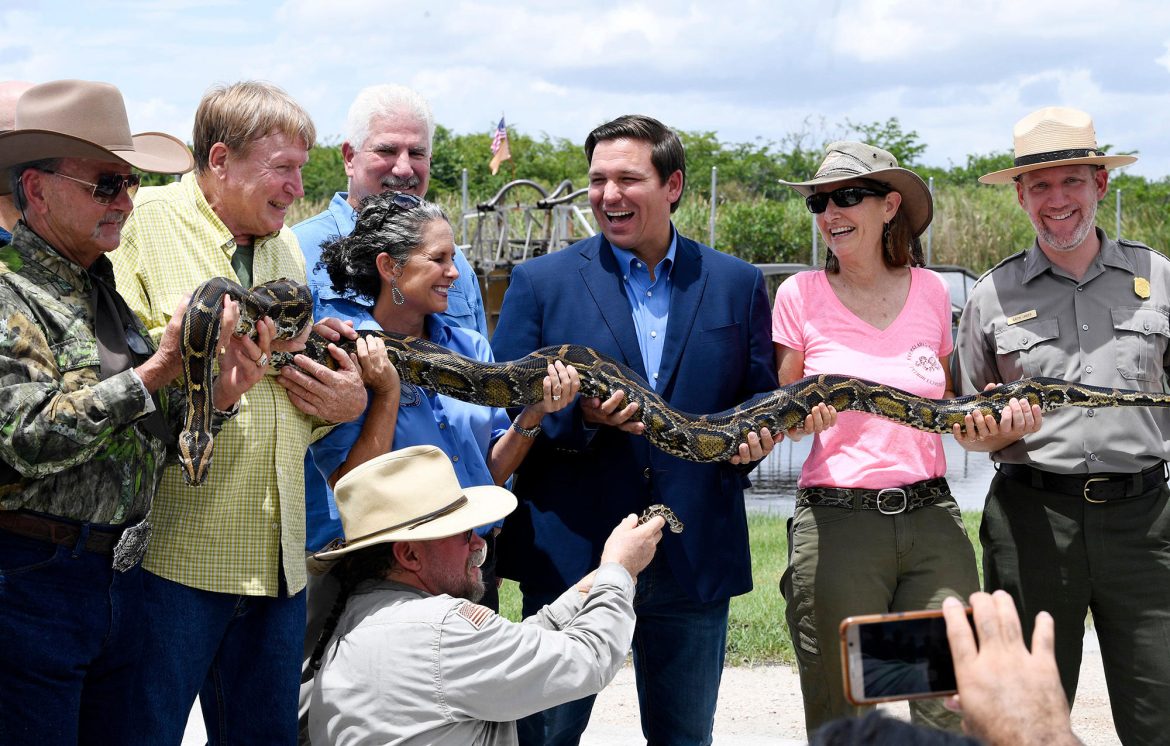 The participants come from near and far to hunt invasive Burmese pythons in South Florida. From 32 states and Canada, the competitors have until 5 p.m. on August 14 to find and humanely kill as many Burmese pythons as possible. Thousands of dollars in cash prizes are up for grabs in both the professional and novice categories, according to Florida Fish and Wildlife Conservation Commission (FWC).

The public is required to take online training and register on the FWC website before setting off to find the snakes. In the 2021 Florida Python Challenge, 223 invasive Burmese pythons were removed from the Everglades. This was over double the amount removed in 2020, with only 600 competitors.

“The Florida Everglades is an iconic habitat in Florida and removing Burmese pythons from this ecosystem is critical to the survival of the species that live in this vast, wild area,” said FWC Chairman Rodney Barreto.

“I am excited to kick off the 2022 Florida Python Challenge by going out into the Everglades to join those coming from near and far, both novices and professionals, to hunt pythons – today marks another year of innovative conservation strategies to protect Florida’s beautiful natural resources for generations to come,” First Lady Casey DeSantis said. “This is significant because every python removed is one less invasive species preying on our native birds, mammals, and reptiles. Our family will continue to support conservation efforts in the Everglades, and today I’m doing that by being one of the first out to hunt this invasive species.”

In addition to removing the pythons, FWC’s motivation for the python hunt is to raise awareness about the invasive species and how they are a threat to the Everglades ecosystem, including the native wildlife.

Burmese pythons negatively impact native species. They are mostly found in and around the Everglades ecosystem in south Florida. Females may lay 50 to 100 eggs at a time, causing a rapid increase in population. More than 16,000 Burmese pythons have been removed since 2000, according to FWC.

Irresponsible pet owners, unable or unwilling to care for the snakes — which can reach more than 20 feet in length — likely released the first pythons into the Florida Everglades. However, many experts believe it was Hurrican Andrew, a category 5 storm that destroyed a python breeding facility and released countless snakes into the wild in 1992, that established a reproducing population of the Asian-native snakes in the Everglades.

Since 2019, the state has taken unmatched action to remove Burmese pythons. According to the FWC website:

In June, The Freedom First budget made a record investment of up to $3 million for python removal efforts. These efforts include supporting research and the development of technologies that can detect and remove these pythons.

“In addition to python removal efforts on public lands, pythons can be humanely killed on private lands at any time with landowner permission — no permit or hunting license required — and the FWC encourages people to remove and kill pythons from private lands whenever possible,” according to the FWC.