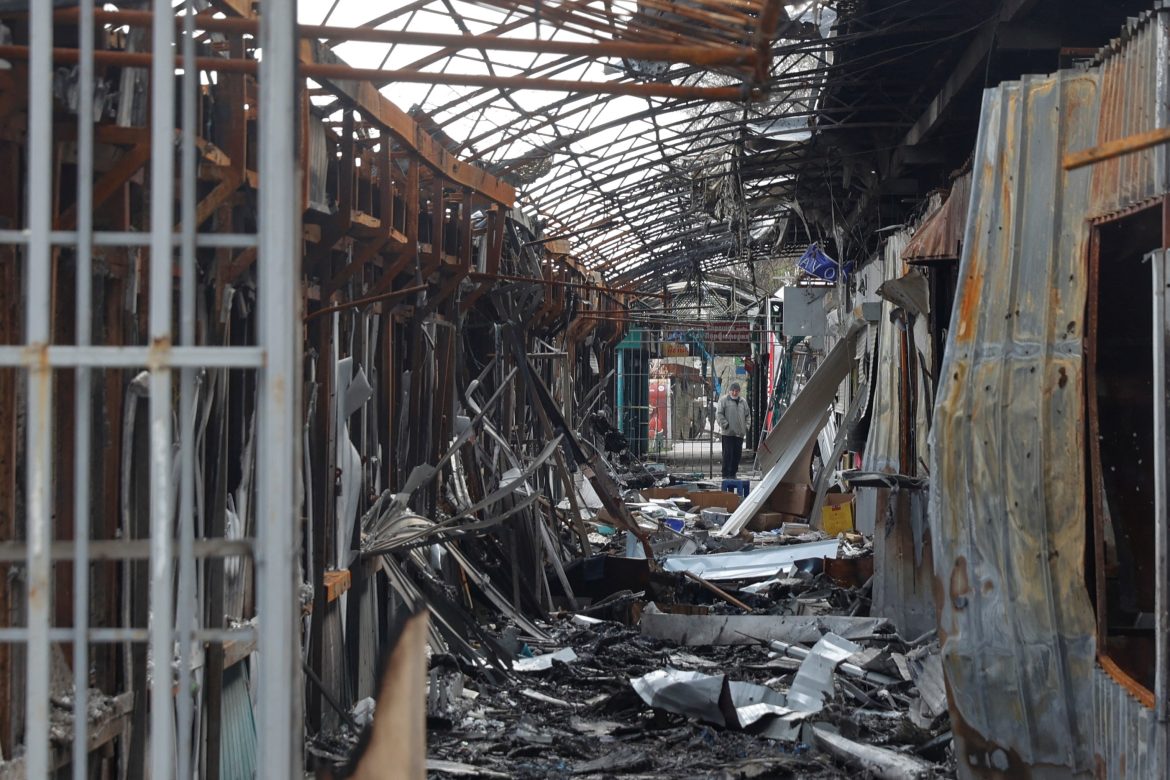 Russia gave holdout Ukrainian soldiers an ultimatum to lay down arms on Sunday in the pulverized southeastern port of Mariupol, which Moscow said its forces almost completely controlled in what would be its biggest capture of the nearly two-month war.

Several hours after the 0300 GMT deadline, there was no sign of compliance by Ukrainian fighters holed up in the shouldering Azovstal steelworks overlooking the Sea of Azov.

Having failed to overcome Ukrainian resistance in the north, the Russian military has refocused its ground offensive on the eastern Donbas region while maintaining long-distance strikes elsewhere including the capital Kyiv.

Lamenting an “Easter of War” during an address in St. Peter’s Square, Pope Francis pleaded for an end to the bloodshed and implicitly criticized Russia.

“May there be peace for war-torn Ukraine, so sorely tried by the violence and destruction of the cruel and senseless war into which it was dragged,” he said, thanking those who had taken in some 4 million refugees from Ukraine.

Russia said its troops had cleared the urban area of Mariupol, the main port in Donbas. The city has seen some of the fiercest fighting and worst civilian suffering since the Feb. 24 invasion, with bodies littering destroyed streets and thousands hunkered down in atrocious conditions underground.

The steelworks, one of Europe’s biggest metallurgical plants with a maze of rail tracks and blast furnaces, has become a last stand for the outnumbered defenders.

“The Russian Armed Forces offer the militants of nationalist battalions and foreign mercenaries from 06:00 (Moscow time) on April 17, 2022, to stop any hostilities and lay down their arms,” Russia’s defense ministry said.

“All who lay down their arms are guaranteed that their lives will be spared,” it said, offering the defending “remnants” a four-hour window to leave the plant without arms or ammunition.

‘Our soldiers are blocked’

There was no immediate response from Kyiv to the ultimatum, though Ukraine’s military said Russian air strikes on Mariupol continued along with assault operations near the port.

Ukrainian President Volodymyr Zelenskyy accused Russia on Saturday of “deliberately trying to destroy everyone” in Mariupol and said his government was in touch with the defenders. But he did not address Moscow’s claim that Ukrainian forces were no longer in urban districts.

He said killing his troops would put paid to peace efforts.

“Our soldiers are blocked, the wounded are blocked. There is a humanitarian crisis… Nevertheless, the guys are defending themselves,” he told the Ukrainska Pravda news portal.

If Russia’s capture of the port is confirmed, it would be a major strategic prize for Moscow: connecting territory it holds in Donbas with the Crimea region it annexed in 2014.

Russia calls its action a special military operation to demilitarize Ukraine and clear out what it calls dangerous nationalists backed by an expansionist NATO military alliance. The West and Kyiv accuse President Vladimir Putin of unprovoked aggression.

Russia said Ukraine had lost more than 4,000 soldiers in Mariupol as of Saturday. But Kyiv says its total troop losses nationwide so far in the war are less than that, between 2,500 and 3,000. Neither side’s figures could be verified.

It was not known how many soldiers were in the steelworks. Satellite images have shown smoke and fire coming from the area, which is riddled with tunnels underneath.

Petro Andryushchenko, an assistant to Mariupol’s mayor, said Russians were giving passes to hundreds of civilians for permission to move around central parts of the city.

Elsewhere in Ukraine, there were more reports on Sunday of sporadic Russian strikes around major popular centers.

Russia said it had destroyed an ammunition factory near the capital, according to the RIA news agency.

Russia has changed tactics after Ukraine’s military resisted ground advances in the north during the early phase of the war. The Ukrainians showed greater nimbleness and deployed Western-supplied anti-tank missiles against slow-moving Russian armored convoys confined to roads by muddy terrain.

Despite the desperate situation in Mariupol, Ukraine said it was holding off Russian forces in other parts of the Donbas regions of Donetsk and Luhansk.

On Sunday, Ukrainian police in Donetsk said that over the past 24 hours, Russian forces opened fire from tanks, multiple rocket launchers and heavy artillery on 13 settlements under Ukrainian control, killing two civilians.

The death of death – the miraculous resurrection of Jesus Christ