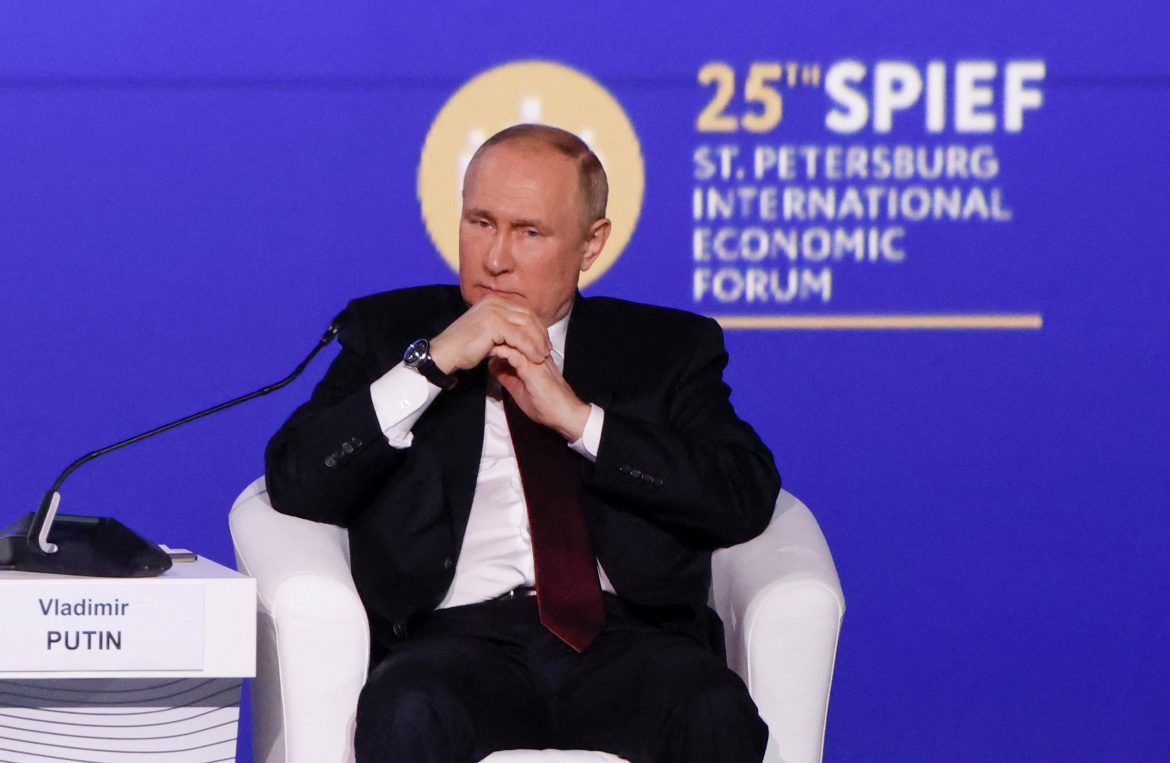 Hackers on Friday delayed the start of President Vladimir Putin’s speech to Russia’s flagship economic forum, shorn of strong Western participation as Russia adjusts to the “new reality” of life under Western sanctions.

State companies made a point of publicly signing deals and many firms had stalls with floor-to-ceiling display screens and glamorous attendants at the 25th St Petersburg International Economic Forum, which aims to rival the Davos World Economic Forum.

But the Western investors and investment bankers who had turned up in previous years were conspicuously absent.

“New business from the Italian side is just frozen,” Italian businessman Vincenzo Trani told Reuters on the sidelines of a session titled “Western investors in Russia: new realities”.

“New investment is just impossible and people are not increasing investments.”

Kremlin spokesperson Dmitry Peskov said a denial of service attack, which works by flooding servers with bogus traffic, had struck the forum’s accreditation and admission systems. He did not apportion blame but the situation in Ukraine loomed large.

As Russian forces moved into Ukraine on Feb. 24, Kyiv called on “hacktivists” to help. There was no immediate response from Ukraine to what is known as a “distributed denial of service”, a basic form of digital disruption that has been used heavily by both sides of the Russia-Ukraine conflict.

Internet connectivity and speeds suffered at the forum, and Putin’s speech, in which he accused the West of trying to crush his country with an economic “blitzkrieg”, was delayed by a little over 100 minutes.

Western sanctions against Russia over its actions in Ukraine combined with related supply chain issues have starkly altered Russia’s export-import dynamics, with the country now looking to the likes of China and India and turning away from the West.

Key banks have lost access to the global payments system SWIFT, Western brands are shunning the country and selling up in a hurry, writing off billions of dollars in assets – and the European Union has promised an embargo on Russian oil.

Deputy Prime Minister Dmitry Chernyshenko lamented Russia’s backwardness in technology, and said the “painful process” of Russia switching to its own technology was under way.

“You are competing with global companies that have overtaken you by whole generations,” he told an audience of Russian business representatives.

The CEO of Russia’s top lender Sberbank summed up the situation with grim irony.

“They say all is well with business in Russia, there are just small problems: there is no one to buy from and no one to sell too, it’s impossible to pay and impossible to supply,” German Gref said on Friday. “This is a joke, but it reflects reality.”

Tadzio Schilling, head of the Association of European Businesses, which groups hundreds of firms inside and outside Russia, said the losses for those doing business in Russia “can be colossal nowadays”.

“Short-term prospects for companies are gloomy,” he said.

A global price squeeze in gas had created a window of opportunity that Russia, heavily reliant on its vast fossil fuel exports, needed to seize before it closed, he said.

But his company could not commission a compression line – a key part of his industry, without components that are now restricted by sanctions from sale to Russia.

“We have to create a domestic liquefaction technology for this,” he said. “A full-fledged localization program is required, provided with full funding.”

Russian companies usually offer interviews and make big announcements at the forum, the main event in Russia’s corporate calendar, but this year speakers were thin on the ground.

Many Russian firms are grappling with how to handle their communications, said Ksenia Kasyanova, R&D Director at PR company CROS.

She said they were torn between wanting to restore demand and the fear that any comments might not be publicized with as much context as they would like.

“Faced with this dilemma, businesspeople are eventually settling on the complicated task of ‘loudly keeping silent’,” Kasyanova said – putting the company in the public field but minimizing communications and advertising.

“No company can have aggressive development in this period,” he said. “We have to wait for peace.”