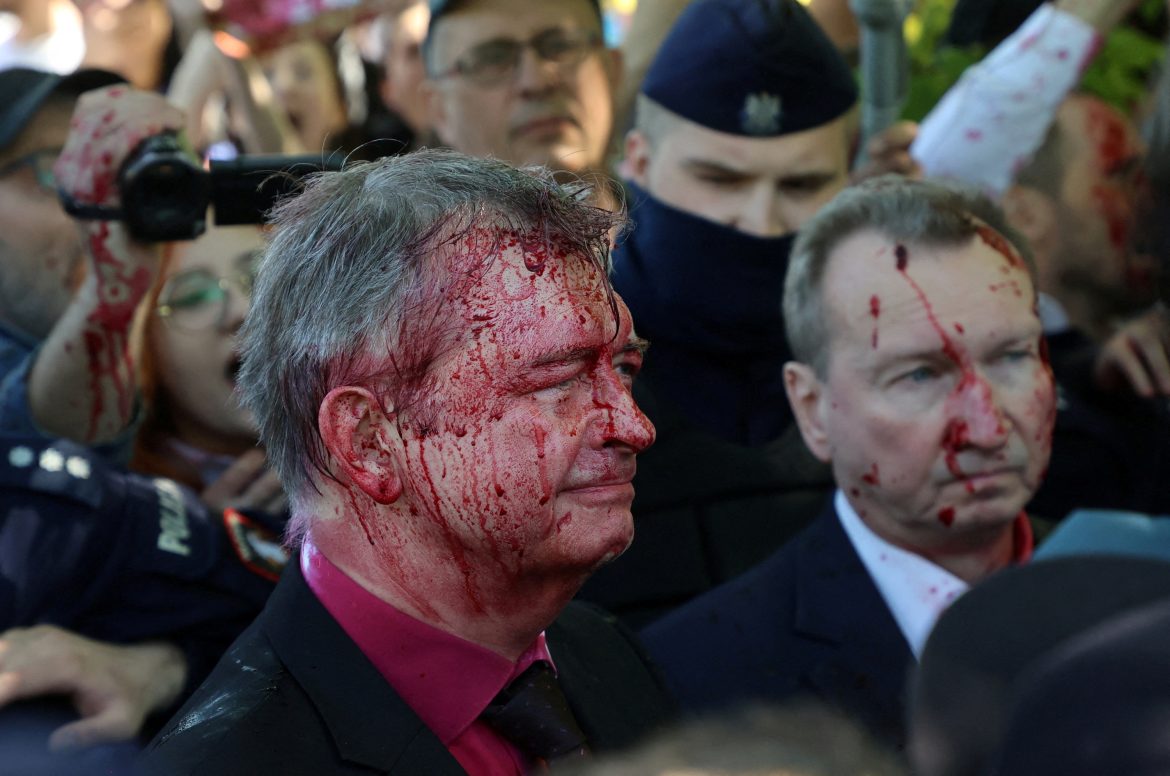 Russia’s ambassador to Poland was doused in a red substance on Monday by people protesting against the war in Ukraine as he went to lay flowers at the Soviet Military Cemetery in Warsaw to mark the 77th anniversary of the victory over Nazi Germany.

The war in Ukraine has cast a shadow over this year’s Victory Day, when Moscow honors the 27 million Soviet citizens who lost their lives in World War Two. Poland, a strong supporter of Ukraine in its resistance to Russia’s invasion, opposed any large-scale commemoration taking place.

Video footage posted on Twitter showed the protesters, some with Ukrainian flags, surrounding the Russian delegation and chanting “fascists” before Ambassador Sergey Andreev was doused in the red substance.

Andreev told reporters he and his team were not seriously hurt in the incident, TASS news agency reported.

“We will make a formal protest,” he said. “When they recommended that we not hold a larger event, we met them halfway, we didn’t aggravate the situation.”

Earlier in the day the words “Kill Putin” were found written in blue and yellow, the colors of the Ukrainian flag, on a monument at the cemetery, private broadcaster TVN24 reported. The writing was later removed.

One protester interviewed by TVN24 said it was good that the ambassador had been covered in red.

“With all our heart we are with Mariupol,” she said, referring to the southeastern Ukrainian city that has been devastated by the war.

The Polish foreign ministry described the incident as “regrettable.” Diplomats enjoy special protection, regardless of the policies pursued by the governments that they represent,” it said in a statement.

The Russian foreign ministry said in a statement: “A strong protest was expressed to the Polish authorities for practically conniving with neo-Nazi thugs.”

It also demanded that the Polish authorities organize a new wreath-laying ceremony immediately after the incident forced the suspension of the original plan.

Poland, home of the Solidarity trade union that played a key role in bringing down communism in central and eastern Europe, has long had a tense relationship with Russia and is an advocate of tough sanctions against Moscow over its invasion of Ukraine.

More than three million Ukrainians have fled to Poland since the Russian invasion began on Feb. 24.

President Vladimir Putin calls Russia’s actions in Ukraine a “special military operation” to disarm the country and protect it from fascists. Ukraine and the West say the fascism claim is a false pretext for an unprovoked war of aggression by Russia.