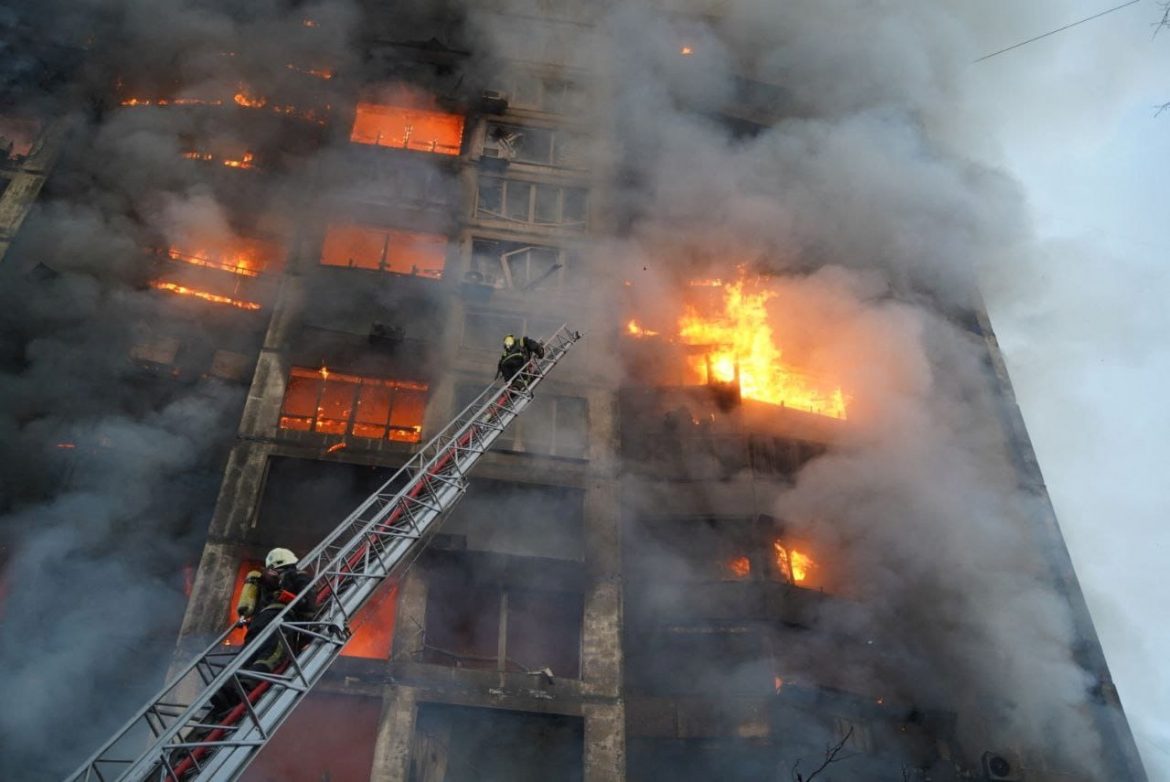 Kyiv was rocked by predawn explosions and air raid sirens this morning as Russian forces stepped up their assault on Ukraine’s capital city.

An apartment building was struck, killing at least one and trapping multiple other people, according to reporting by the Associated Press. Another explosion heavily damaged the entry to a subway station that has been used as a bomb shelter, rendering it even more challenging for residents remaining in the city to find safety. Meanwhile, Russian forces continue shelling the outskirts of Kyiv. Fox News journalist Benjamin Hall, who has been embedded in the capital, was wounded in one of the attacks and subsequently hospitalized. His condition is not known at this time.

Russia shows no signs of slowing down its scorched-earth campaign seemingly designed to inflict as much destruction, terror, and suffering as possible in an effort to break the will of the Ukrainian people. A fourth round of talks between Ukrainian and Russian delegates on Monday by video ended with no announcements of progress. Negotiations are expected to resume today.

“The 19th day of our resistance is over. Historical war. Another difficult day, which is still approaching our victory. Approaching peace for Ukraine,” Zelenskyy said, according to his presidential office.

The leader also offered Russian conscripts a “chance to survive” through surrender.

“On behalf of the Ukrainian people, I give you a chance. Chance to survive,” he began. “If you surrender to our forces, we will treat you the way people are supposed to be treated. As people, decently. In a way you were not treated in your army. And in a way your army does not treat ours,” Zelenskyy continued. “Choose!”

In Washington, a senior U.S. Department of Defense official on Monday said Russian forces have been increasing long-range fires on Mariupol, Kyiv, Kharkiv, Chernihiv and other population centers in Ukraine, noting that, since the start of the war, Moscow has launched over 900 missiles on its neighbor.

“What we’re seeing on the ground is a continued military effort to subdue these population centers and to do it now with ever more violence using more and more long-range fires, which are increasingly indiscriminate in terms of what they’re hitting,” the official said.

Still, fierce Ukrainian resistance continues to slow advances by Russian forces, who have not yet achieved overall air superiority.

“We are fast at work on filling out that [order],” the official said.

Meanwhile, Pentagon Press Secretary John Kirby addressed Russia’s expansion of the war into western Ukraine, including a strike on a military base less than 15 miles from Poland’s border where U.S. National Guard members trained alongside Ukrainian troops only weeks ago, increasing concerns that a strike in Poland will trigger an Article 5 response by NATO, effectively drawing the alliance into the war.

“They are clearly expanding some of their target sets here,” Kirby said at a Monday afternoon press briefing. “I can’t get into their heads to tell you exactly what was behind that target on that day with that many cruise missiles,” he continued, adding, “I don’t want to just reduce this to some sort of signaling.”

Kirby also said that the U.S. has moved Patriot batteries from locations in Germany to Poland, adding that the Department of Defense will “continue to look at potential repositioning if we need to, to defend NATO’s eastern flank.”

The press secretary went on to state that the Patriot batteries are “defensive in nature for over NATO airspace and NATO territory.”

“For our purposes, the military capabilities that we are adding to NATO’s eastern flank are designed to protect and defend and deter against attacks on NATO territory — that includes NATO airspace,” Kirby said.

U.S. National Security Advisor Jake Sullivan on Monday warned China against backing Russia’s war on Ukraine during a tense, seven-hour meeting with a senior Beijing diplomat in Rome. State Department spokesperson Ned Price said Sullivan “raised directly and very clearly” concerns over China’s support for Russia during his meeting with Yang Jiechi following reports that the Kremlin is seeking economic relief and military aid from Beijing. Price added that China’s decision to provide assistance to the Kremlin would have significant implications for Beijing’s relationships around the world, including U.S. allies and partners in Europe.

China and Russia both deny discussing any military or economic assistance.

Ukrainian President Volodymyr Zelenskyy will make a virtual address to Congress on Wednesday, likely taking up the topic of his repeated calls on NATO to establish a no-fly zone over Ukraine to protect its citizens from Moscow’s relentless air assaults on residential areas.

“Please make sure our Ukrainian skies are safe,” he told British lawmakers last week via video link. The Ukrainian president, in perhaps his most urgent plea to date, suggested that the NATO alliance would be directly responsible for deaths in his country if it fails to implement the no-fly zone, which he said has “given the green light for the bombardment of Ukrainian cities and villages.”

“If you do not close our sky, it is only a matter of time before Russian missiles fall on your territory, on NATO territory, on the homes of NATO citizens,” Zelensky said in his latest video update on the war.

The Biden administration and other members of the alliance have opposed setting up a no-fly zone over Ukraine over fears it could draw NATO members into war with Russia.

One NATO member has broken with the alliance’s position on implementing a no-fly zone.

The Riigikogu also called on NATO allies  to provide Ukraine with “a roadmap to membership” and for the EU to fast-track Ukraine’s official application for membership.

Meanwhile, leaders from Poland, Slovenia, and the Czech Republic will travel by train to Kyiv today on behalf of the European Union in a symbolic show of support for Ukraine and acknowledgment of the remarkable courage of its people in the midst of a brutal and unprovoked war.

“The aim of the visit is to express the European Union’s unequivocal support for Ukraine and its freedom and independence,” Czech Prime Minister Petr Fiala said in a tweet.