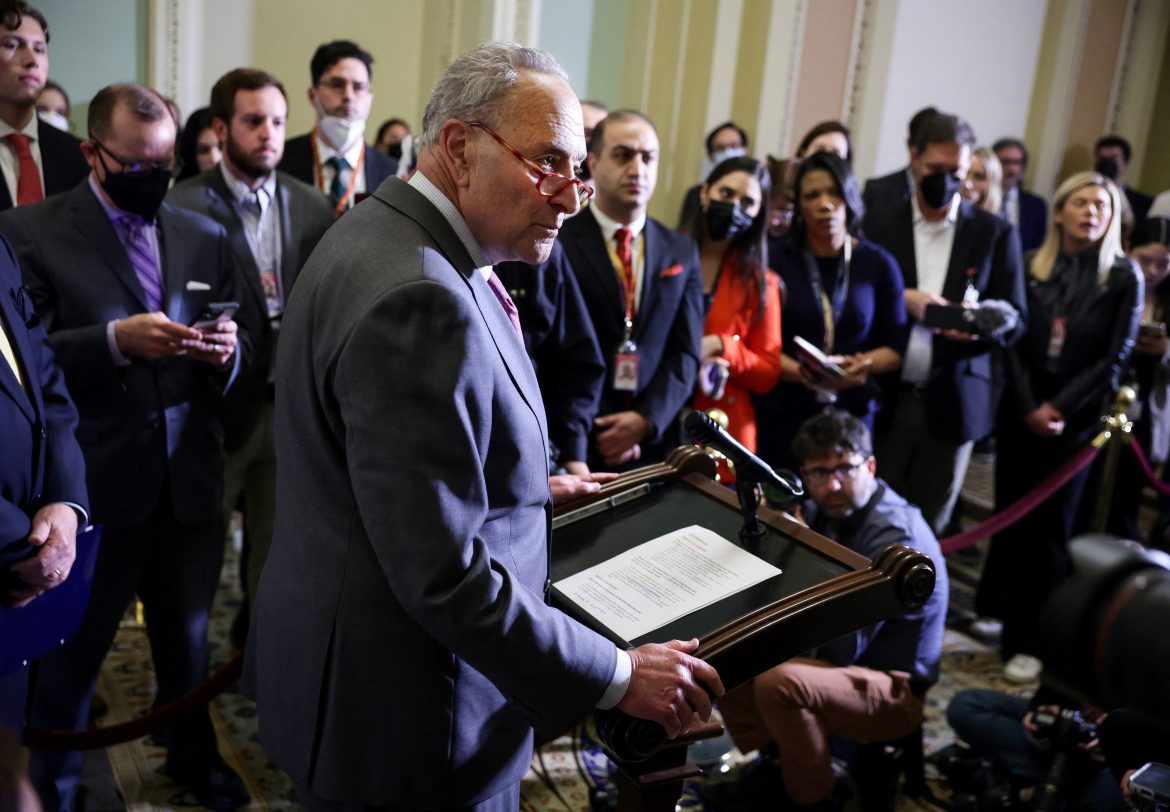 Senate Majority Leader Chuck Schumer (D-N.Y.) has blocked a bill that would have created a clearinghouse for school leaders to consult for best practices on keeping campuses safe and guidance on finding grants that would pay for security upgrades.

Sen. Ron Johnson (R-Wis.) proposed the bill – the Luke and Alex School Safety Act, which is named after a pair of victims of the 2018 school shooting in Parkland, Florida – Wednesday and asked for it to be passed by unanimous consent.

“There’s nothing partisan about this bill whatsoever,” Johnson said at the time. “It’s just a good idea that could save lives. It was such a good idea, that under the previous administration, they set up that clearinghouse. It’s up and it’s operating. So all this bill does at this point is serve as a model for what’s happening. All this bill does now is codify it to make sure this clearinghouse stands the test of time – that it will always be there to provide the best practices on school safety.

Johnson added, “Now, I’m very sensitive to the moment in time we’re in right now. We should let the nation and those parents grieve. I don’t want to politicize anything about this moment.”

Unanimous consent was not forthcoming, and now it is unclear when or if the bill will ever proceed. Schumer rejected Johnson’s request and accused the Wisconsin senator of offering a bill that would make matters worse.

“GOP Sen. Johnson just tried for a bill that could see more guns in schools—I blocked it,” Schumer tweeted. “The truth: There were officers at the school in Texas. The shooter got past them. We need real solutions—We will vote on gun legislation starting with the Domestic Terrorism Prevention Act.”

GOP Sen. Johnson just tried for a bill that could see more guns in schools—I blocked it.

The truth: There were officers at the school in Texas. The shooter got past them.

We need real solutions—We will vote on gun legislation starting with the Domestic Terrorism Prevention Act.

The reality of whether there was an armed officer at the school, however, remains foggy. In most initial reports of the tragedy, it was relayed that an armed officer exchanged fire with 18-year-old perpetrator Salvador Perez. In later reports, however, it was said that there was a resource officer but he was not armed.

At a press conference on Thursday afternoon Texas Department of Public Safety spokesperson Victor Escalon provided more, though still vague, information saying, “No, there was not an officer readily available, armed. No. ” When a reporter was seemingly prepared to ask if there was any officer at the school at all, Escalon interrupted and said, “No. Nothing. I can’t answer that yet. I’ll circle back with you. Again, as we do that investigation we have all these questions we want to answer.”

Texas DPS official says there was not an armed resource officer at Robb Elementary School when the shooting occurred. pic.twitter.com/AXb8JVfgDe

In similar fashion, The Domestic Terrorism Prevention Act, which is central to the Biden administration’s goal of combatting white supremacy, also hit a wall on Thursday.

Although not in direct retaliation for Schumer’s blocking of Johnson’s bill – conservatives have bristled at the idea of the bill since its unveiling – 47 Republican senators voted to prevent the domestic terrorism bill from advancing to debate. Ten Republicans would have been needed to overcome a filibuster.

Schumer attempted to leverage Johnson’s bill, saying that he’d allow it to be considered if Republicans agreed to debate the domestic terror bill.

Johnson accused Schumer of lying, apparently about the bill leading to more guns in schools.

“Not surprising that the Democrat leader would lie about the bill he blocked that parents of Parkland victims have been trying to pass for years,” Johnson tweeted. “Dems aren’t looking for solutions, they want wedge issues that they hope will keep them in power. Sick.”

Not surprising that the Democrat leader would lie about the bill he blocked that parents of Parkland victims have been trying to pass for years.

Dems aren’t looking for solutions, they want wedge issues that they hope will keep them in power. Sick. https://t.co/f4zbNb03ey

Johnson was not alone in his criticism of Schumer. Both Florida senators, Marco Rubio and Rick Scott, each a cosponsor of the Johnson’s bill, sounded off.

Scott replied to Schumer’s original post, “This was a bill I worked on with the parents of Parkland victims. It’s named after them. You’re a liar and a hack.”