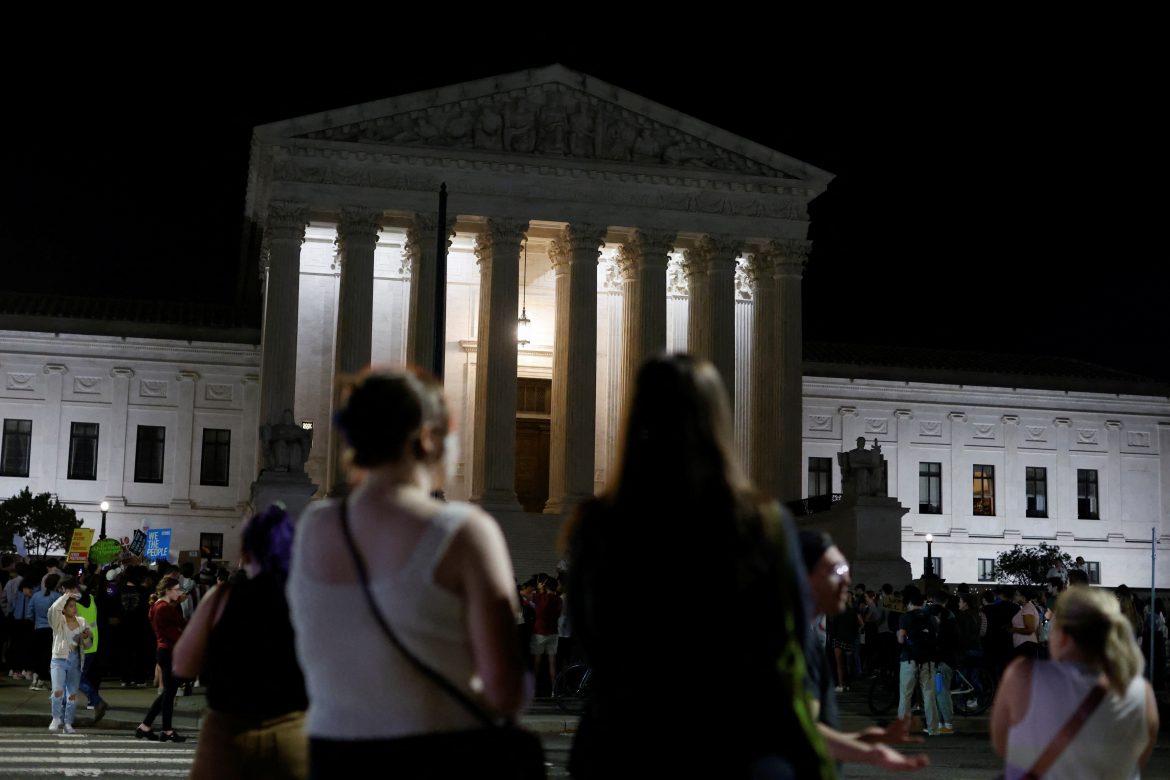 The Supreme Court is ready to strike down Roe v. Wade, according to a leaked draft opinion obtained by Politico.

In the initial majority draft that was leaked, Justice Samuel Alito writes, “We hold that Roe and Casey must be overturned,” referring to the 1973 decision legalizing abortion and subsequent ruling upholding the decision.

“Roe was egregiously wrong from the start. Its reasoning was exceptionally weak, and the decision has had damaging consequences. And far from bringing about a national settlement of the abortion issue, Roe and Casey have enflamed debate and deepened division,” Alito continues in the opinion.

An unnamed source said to be familiar with the court’s deliberations told Politico that conservative Justices Amy Coney Barrett, Neil Gorsuch, Brett Kavanaugh, and Clarence Thomas voted with Alito in December after hearing oral arguments in a case involving Mississippi’s decision to ban most abortions after 15 weeks. The court’s three Democratic-appointed justices, including Stephen Breyer, Elena Kagan, and Sonia Sotomayor, are purportedly working on dissents, according to the source. How Chief Justice John Roberts will vote is unclear; he could possibly join with Alito’s opinion or draft his own.

No draft decision in the Supreme Court’s modern history has ever been disclosed publicly while a case was still pending. Some analysts surmise that the extraordinary breach was perpetrated by a liberal clerk in an attempt to pressure the justices to uphold Roe – particularly Roberts.

“Leaking a draft opinion is a scumbag move designed to create public pressure against the court before the decision is finalized,” RealClearInvestigations senior writer Hemingway tweeted.

It’s impossible to overstate the earthquake this will cause inside the Court, in terms of the destruction of trust among the Justices and staff. This leak is the gravest, most unforgivable sin.” the SCOTUS blog tweeted

It’s impossible to overstate the earthquake this will cause inside the Court, in terms of the destruction of trust among the Justices and staff. This leak is the gravest, most unforgivable sin.

U.S. Chief Justice John Roberts on Tuesday said the Supreme Court will investigate the leak of a draft decision in a news release issued by the court that confirmed the draft opinion, dated from February, is authentic.

“To the extent this betrayal of the confidences of the court was intended to undermine the integrity of our operations, it will not succeed. The work of the court will not be affected in any way,” Roberts said.

“We at the Court are blessed to have a workforce – permanent employees and law clerks alike – intensely loyal to the institution and dedicated to the rule of law. Court employees have an exemplary and important tradition of respecting the confidentiality of the judicial process and upholding the trust of the Court,” he further commented. “This was a singular and egregious breach of that trust that is an affront to the Court and the community of public servants who work here.”

He directed the court’s marshal to launch an investigation into the source of the leak.

News of the leak and its contents sparked protests from abortion rights activists who gathered in front of the Supreme Court late Monday. Pro-life advocates were also present, though in fewer numbers. Fencing was placed around the building early Tuesday as the crowd continued to swell.

Some of the nation’s lawmakers also weighed in on the leak that could potentially reverse the landmark decision on abortion rights.

Those on the right celebrated that the court seemed poised to overturn the case that federally legalized infanticide, but also expressed outrage that the ruling was leaked in an apparent attempt to sway the justices.

“The next time you hear the far left preaching about how they are fighting to preserve our Republic’s institutions & norms remember how they leaked a Supreme Court opinion in an attempt to intimidate the justices on abortion,” tweeted Sen. Marco Rubio (R-Fla.)

Tom Cotton (R-Ark.) also weighed in on the report, saying, “The Supreme Court & the DOJ must get to the bottom of this leak immediately using every investigative tool necessary. In the meantime, Roe was egregiously wrong from the beginning & I pray the Court follows the Constitution & allows the states to once again protect unborn life.”

Those on the left lambasted the potential ruling, while staying largely silent on the underhanded leak.

Top House and Senate Democrats Nancy Pelosi and Chuck Shumer stated, “Several of these conservative Justices, who are in no way accountable to the American people, have lied to the U.S. Senate, ripped up the Constitution and defiled both precedent and the Supreme Court‘s reputation – all at the expense of tens of millions of women who could soon be stripped of their bodily autonomy and the constitutional rights they’ve relied on for half a century.”

“Congress must pass legislation that codifies Roe v. Wade as the law of the land in this country NOW. And if there aren’t 60 votes in the Senate to do it, and there are not, we must end the filibuster to pass it with 50 votes,” wrote Sen. Bernie Sanders (D-Vt.)

For now, Roe remains the governing law, but an official decision is expected within the next two months.. If it is ultimately overturned, abortion law will be decided at the state level.

The justices concluded their final arguments of the current term last Wednesday; however, special sessions are scheduled over the next two months to release rulings in cases still pending, including the Mississippi case

Republicans trusted more than Democrats on economy and national security