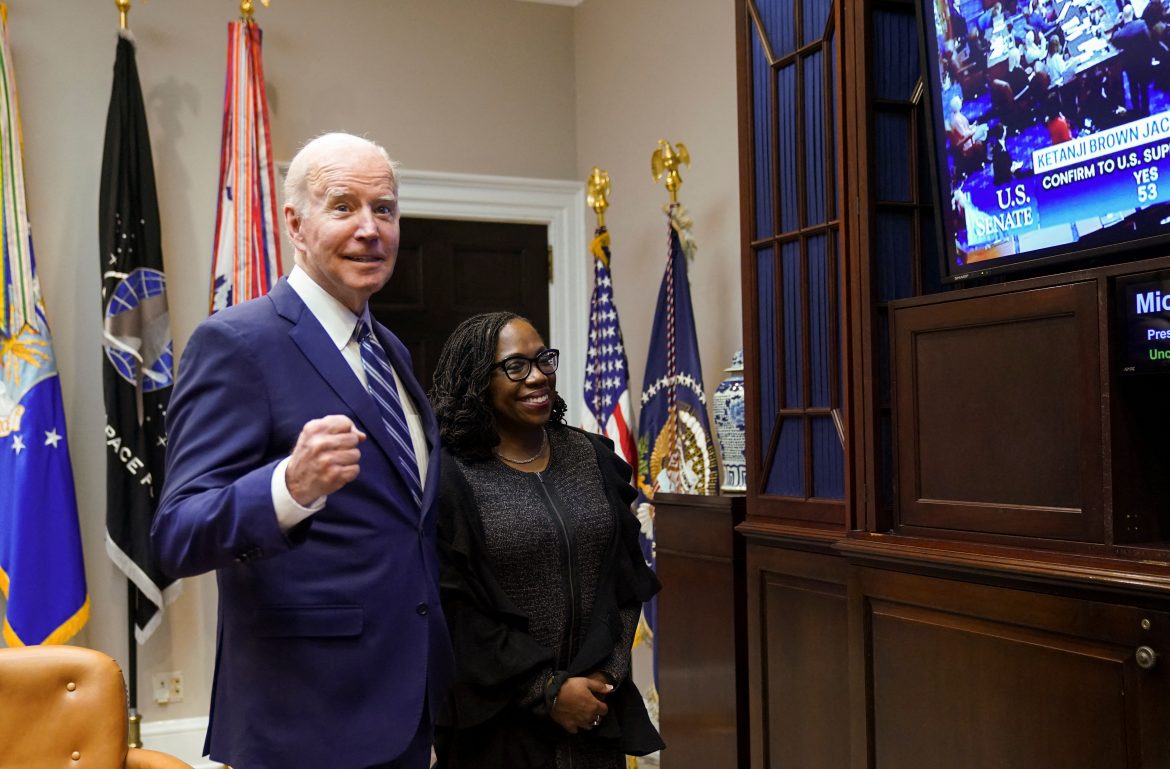 On Thursday, the Senate voted 53-47 to confirm Ketanji Brown Jackson to the Supreme Court, making her the first black woman to serve on the nation’s highest court.

“This is one of the great moments of American history,” said Senate Majority Leader Chuck Schumer (D-N.Y.) before the vote. “Today we are taking a giant, bold and important step on the well-trodden path to fulfilling our country’s founding promise. This is a great moment for Judge Jackson but it is an even greater moment for America as we rise to a more perfect union.”

Democrats celebrated the historic nomination as Vice President Kamala Harris, the first Black woman to hold her position, presided over the confirmation. After the vote, Harris told reporters, “I am feeling a deep sense of pride in who we are as a nation, that we just did what we did as it relates to the highest court of our land.”

In getting Jackson confirmed, President Biden fulfilled his campaign promise to appoint the first black woman to the court. Biden hailed the victory on Twitter, calling Thursday a “historic moment” and saying, “We’ve taken another step toward making our highest court reflect the diversity of America.”

Judge Jackson’s confirmation was a historic moment for our nation. We’ve taken another step toward making our highest court reflect the diversity of America. She will be an incredible Justice, and I was honored to share this moment with her. pic.twitter.com/K8SAh25NL5

Republicans Susan Collins (Maine), Lisa Murkowski (Alaska), and Mitt Romney (Utah) joined all 50 Senate Democrats in voting to confirm Jackson. Collins wrote in a statement, “In my view, the role the Constitution clearly assigns to the Senate is to examine the experience, qualifications, and integrity of the nominee.  It is not to assess whether a nominee reflects the ideology of an individual Senator or would rule exactly as an individual Senator would want… this is the approach that I plan to continue to use for Supreme Court nominations because it runs counter to the disturbing trend of politicizing the judicial nomination process.”

Collins has a history of going against her party on Supreme Court nominations and other key votes, including voting against the confirmation of Trump-appointed justice Amy Coney Barrett in 2020 on the grounds that the vacancy should not be filled so soon before an election.

Jackson will replace Justice Stephen Breyer after the Supreme Court’s current term ends in June. The 83-year-old Breyer announced his retirement from the nation’s highest court in January, after almost three decades of serving on the bench. As Jackson is expected to continue her predecessor’s liberal voting record, her appointment is unlikely to shift the court’s ideological balance, with conservatives still holding a 6-3 majority.

Jackson becomes only the third black justice to serve on the Supreme Court, joining Thurgood Marshall and current justice Clarence Thomas. She will also be the sixth woman to hold the position. Once she joins the bench, four women will be serving as Supreme Court justices for the first time in U.S. history.

During her confirmation hearings, Democrats praised Jackson for her qualifications and her history as a public defender. As the only justice on the bench with experience in criminal defense, Democrats expressed their belief that she would bring a fresh perspective to the court.

Republicans meanwhile pressed her record on several cultural issues, including Critical Race Theory and a history of lenient sentencing in child pornography cases. She received ridicule for many conservatives, for refusing to respond to Sen. Marsha Blackburn’s (R-Tenn.) question, “Can you provide the definition of the word ‘woman’?” saying, “No, I can’t. I’m not a biologist.”

Now with a lifetime appointment to the nation’s highest court, the 51-year-old Jackson will likely have a major impact on the nation’s judiciary for decades to come.