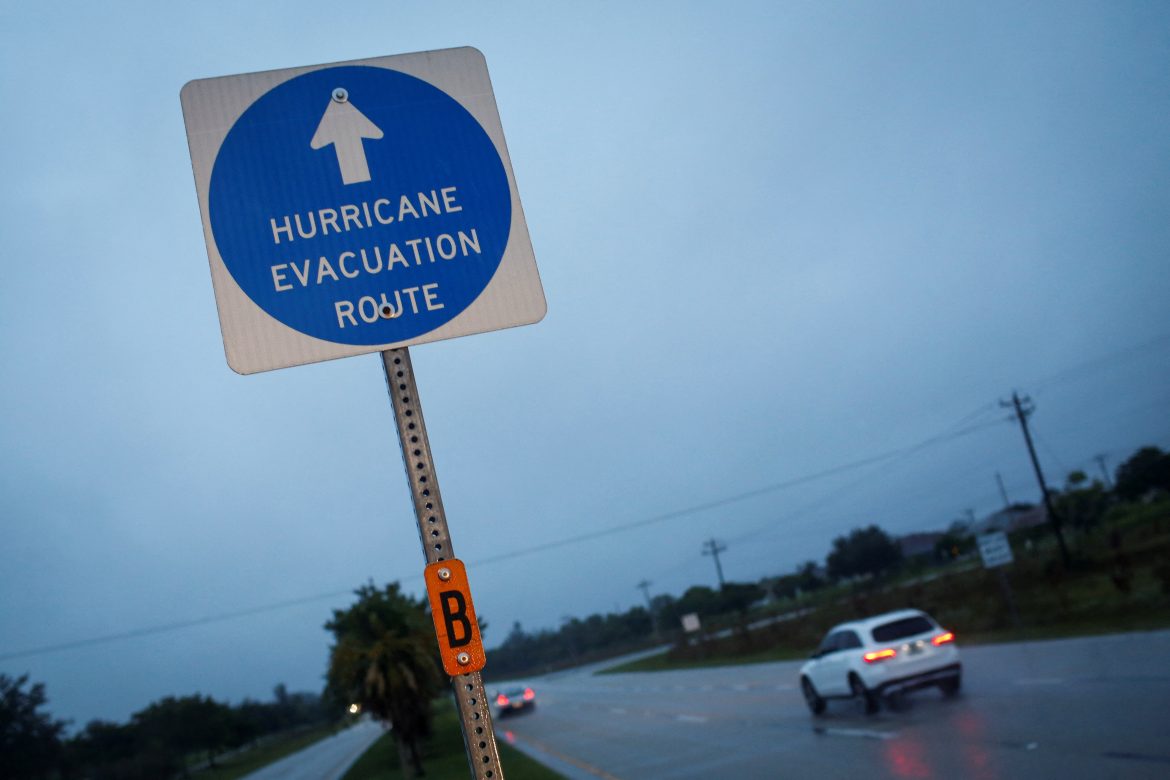 Hurricane Ian intensified to an extremely dangerous Category 4 storm on Wednesday as it barreled closer to Florida’s Gulf Coast, with residents emptying grocery shelves, boarding up windows, and fleeing to evacuation shelters.

In an update, the U.S. National Hurricane Center put Ian‘s location around 80 miles southwest of Punta Gorda, Florida with maximum sustained winds of 155 miles per hour.

While upgrading Ian an to an “extremely dangerous” Category 4 hurricane, the NHC said the storm was expected to weaken somewhat after reaching land.

Time is quickly running out for residents to rush preparations to completion on the southwestern Florida peninsula as Hurricane #Ian nears.

“The storm is here,” Florida Division of Emergency Management Director Kevin Guthrie said, warning of widespread power outages and the possibility of tornadoes.

“Stay indoors. Stay away from windows,” he told an early morning news conference.

Florida Governor Ron DeSantis warned that people in Collier, Lee, Charlotte, and Sarasota counties were no longer safe to evacuate and urged people to get off the roads and stay inside.

Ian hammered Cuba on Tuesday and left the entire Caribbean island nation without power, and was expected to crash ashore into Florida on Wednesday evening south of Tampa Bay, somewhere between Sarasota and Naples.

The first hurricane advisory on Wednesday had put Ian‘s maximum sustained winds near 120 mph, ranking it a Category 3, but said the storm was expected to strengthen.

The Miami-based National Hurricane Center warned that Ian would also unleash pounding surf, life-threatening coastal flooding, and more than a foot of rain in some areas.

Authorities urged more than 2.5 million residents to evacuate their homes for higher ground.

The Florida coastal zone at highest risk for U.S. landfall is home to miles of sandy beaches, scores of resort hotels, and numerous mobile home parks, a favorite with retirees and vacationers alike.

“We’re right on the water, along a canal, so … this could be devastating,” Melissa Wolcott Martino, 78, a retired magazine editor in St. Petersburg, said as she and her husband loaded valuables and pets into their car for a drive to their son’s home north of Tampa on Tuesday.

By late Tuesday night, tropical storm-force winds generated by Ian extended through the Florida Keys island chain to the southernmost shores of the state’s Gulf Coast, the NHC said.

The NHC also issued storm surge warnings for much of western Florida’s shoreline, predicting coastal flooding of up to 12 feet from wind-driven high surf.

“The time to evacuate is now. Get on the road,” Florida’s director of emergency management, Kevin Guthrie, said during a news briefing on Tuesday evening, urging residents to heed evacuation warnings.

DeSantis had warned late Tuesday night that evacuation would become difficult for those who waited much longer to flee because increasing winds would soon force authorities to close highway bridges.

“You need to get to higher ground, you need to get to structures that are safe,” DeSantis said, adding that widespread power outages would leave millions without electricity once the storm strikes.

“I do have concerns about complacency,” Criswell said on Tuesday. “We’re talking about impacts in a part of Florida that hasn’t seen a major direct impact in nearly 100 years. There’s also parts of Florida where there’s a lot of new residents.”

If Ian strikes the Tampa area, it would be the first hurricane to make landfall there since the 1921 Tarpon Springs storm.

It also may prove one of the costliest, with data modeling service Enki Research projecting storm-related damages ranging from $38 billion to more than $60 billion.

Ian churned across the southeastern edge of the Gulf of Mexico headed for Florida after thrashing Cuba, knocking out the electrical grid for 11 million people and ravaging the western end of the island with violent winds and flooding.

Cuba has slowly begun to restore power across the eastern end of the island, the state electricity provider said early on Wednesday.

Cuba’s already frail grid, largely dependent on antiquated, Soviet-era oil-fired generation plants, had been faltering for months ahead of the storm. But officials said Hurricane Ian had proven too much, knocking out power even in far eastern Cuba, which was largely unaffected by the storm.

In Florida, to ease traffic congestion during evacuations, authorities suspended toll collections along major highways in central areas of the state and the Tampa Bay area.

Some residents, such as Vanessa Vazquez, 50, a software engineer in St. Petersburg, said they planned to ride out the storm at home despite evacuation warnings.

“I’m staying put,” Vazquez said. “I have four cats and I don’t want to stress them out. And we have a strong house.”

Nearly 60 Florida school districts had canceled classes due to the hurricane, DeSantis said. More than 175 evacuation centers were opened statewide, many of them school buildings converted to shelters.

“This is a mobile home community, and they really need this shelter,” said Fabiola Galvan Leon, a preschool teacher acting as a bilingual translator for hundreds of evacuees who flocked to Reddick Elementary School in Wimauma, southeast of Tampa.

Shelves at a nearby Walmart store had been stripped almost bare, though some shoppers wandered the aisles hurriedly grabbing the last boxes of water, canned goods, and loaves of bread.

The Walt Disney Co announced it was closing its Florida theme and water parks on Wednesday and Thursday while the National Football League’s Tampa Bay Buccaneers relocated to Miami, where they will practice this week ahead of their game against the Kansas City Chiefs on Sunday.

The storm’s approach also disrupted the Gulf Coast energy industry as personnel were evacuated from 14 production platforms and rigs, halting about 11% of the region’s oil output.