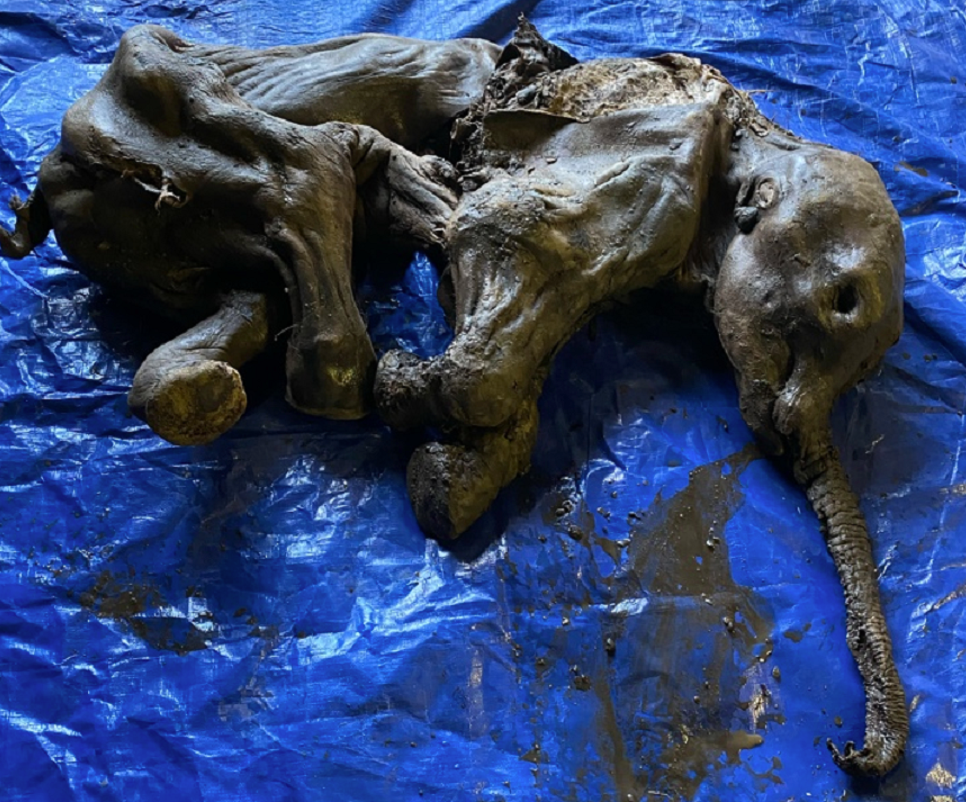 An almost perfectly mummified baby mammoth was uncovered on June 21 in the Klondike gold fields within Trʼondëk Hwëchʼin Traditional Territory. The remains were found by miners working at Eureka Creek while they were excavating through the permafrost, according to the Yukon government.

The baby, measuring just 4.5 feet long, has been described as “the most complete mummified mammoth found in North America.” The preservation of the remains was so complete that much of the baby’s hair and skin were intact, as well as individual toenails and intestines.

Analysis of the remains suggests that the calf was female and was only about a month old at the time of death. This timeline puts her at about the same biological age as “Lyuba,” another woolly mammoth baby discovered in Siberia in 2007.

The female calf, found by a mine worker who accidentally struck the remains with his front-end loader, has been named “Nun cho ga” in the Hän language, which is translated as “big baby animal.” Two geologists were alerted and arrived on site to recover the remains and take samples of the site.

“And the amazing thing is, within an hour of them being there to do the work, the sky opened up, it turned black, lightning started striking and rain started pouring in,” ​​Grant Zazula, a paleontologist for the Yukon government’s Department of Tourism and Culture, told the Canada Broadcasting Corporation (CBC). “So, if she wasn’t recovered at that time, she would have been lost in the storm.”

The geologists from the Yukon Geological Survey and the University of Calgary believe the calf died and was frozen in the permafrost during the Ice Age, which they believe occurred roughly 30,000 years ago, the government of Yukon said. These remains may provide important information about when Nun cho ga roamed the Yukon, it added.

Much is still unknown about this period, but most scientists, representing both young earth and old earth theories, believe that evidence strongly suggests there was indeed an Ice Age in earth’s history. Ken Ham, a young-Earth creationist and apologist, writes extensively on the “Flood of Evidence” that the earth-wide flood described in Genesis is the best scientific explanation for an Ice Age.

Zazula said in a statement: “As an ice age paleontologist, it has been one of my lifelong dreams to come face to face with a real woolly mammoth. That dream came true today. Nun cho ga is beautiful and one of the most incredible mummified Ice Age animals ever discovered in the world. I am excited to get to know her more.”

Nun cho ga’s remains will help scientists understand God’s creation to an even greater extent and will help them to better understand the lives and behavioral patterns of woolly mammoths. This discovery may also give insight into other Ice Age animals such as cave lions and giant steppe bison, researchers said.

“This is a remarkable recovery for our First Nation, and we look forward to collaborating with the Yukon government on the next steps in the process for moving forward with these remains in a way that honors our traditions, culture, and laws,” Tr’ondëk Hwëch’in Chief Roberta Joseph said in a statement.