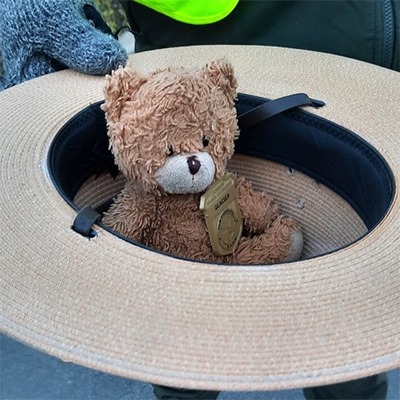 A six-year-old girl has an extra reasons to be thankful this year after a special teddy bear returned to her after nearly a year.

In a story originally reported by the Associated Press, Naomi Pascal from Jackson, Wyoming always carried a teddy bear given to her by her parents back in 2016. At the time, Naomi still lived in an Ethiopian orphanage and her adoption was not yet finalized.

The toy, known as Teddy, has stayed with Naomi through every adventure since, including visits to Ethiopia, Rwanda, Croatia, and Greece. However, Teddy was lost in Oct. 2020 during the family’s visit to Glacier National Park. The family reports that they were almost halfway back to a friend’s home when they realized the stuffed animal was gone.

Ben Pascal, Naomi’s father and the pastor of Presbyterian Church of Jackson Hole, told BBC, “We were probably an hour from the trailhead and Naomi said ‘Where’s Teddy? My heart just sank.”

It snowed later that night, which prompted the Montana park to close the higher altitude trails for the season. Because of this, nobody could search for Teddy the next day. The family reported the missing stuffed animal, hoping that somehow Teddy would be turned in so that he could be reunited with Naomi.

Almost a year went by before Teddy’s fate would be known. For most of the time, he was safe and dry.

Shortly after the seasonal trail closed, Park Ranger Tom Mazzarisi found the soggy stuffed animal in a melted puddle of snow while doing some end-of-the-season work. Perhaps because of his work as a bear specialist in the park, Mazzarisi could not toss the toy, although he said, “Typically, items that aren’t worth much monetarily get thrown out.”

Instead, Teddy spent the winter season in Mazzarisi’s home in St. Mary’s. When the park fully opened in April, Teddy became the “perfect little mascot” to ride around in the windshield of Mazzarisi’s work truck.

At some point in June, Addie Pascal asked social media for help locating her daughter’s bear once again. She asked Facebook users to look for Teddy near the Hidden Lake Trail at the park. She also wrote, “He’s been by her side for so many milestones. But there are many more adventures to be had!”

However, it wasn’t until September when a family friend named Terri Hayden visited the park that Teddy was finally located. Because a bear near the road brought Mazzarisi’s truck into Hayden’s path, she spotted the toy. After confirming that it was Naomi’s missing Teddy, Hayden then connected with park rangers who could help explain the story behind the bear.

Hayden said, “I’m a woman of faith. And that morning I said, ‘OK Lord, if this bear is around, please put that bear in my path and let me come home with that bear today.’”

Park rangers released Teddy into Hayden’s custody along with a Junior Park Ranger badge and a ranger hat. One mail trip later and Teddy was finally reunited with Naomi. The corresponding Facebook post from the park received over 12,000 likes.

“It was just a story of hope and kindness and people just working together,” Ben Pascal said. “It touched people’s hearts. It gave them hope. It made them feel like there is good in the world, which I believe there is.”

Later, Hayden purchased a new bear to act as Mazzarisi’s mascot. He has named this stuffed animal Clover. She’s now hibernating in his cabin but will return to work alongside him in April.

‘Get Back’ documentary shows Beatles ‘as you’ve never seen before’