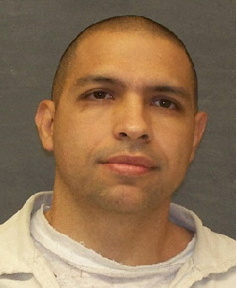 A man who escaped from a Texas prison last month died in a shootout with police hours after becoming the prime suspect in the murder of a Houston family of five who were found dead at their weekend cabin, a state prisons spokesperson said.

Police officers in Jourdanton, a small town south of San Antonio, on Thursday spotted Gonzalo Lopez, 46, in a pickup truck he allegedly stole from the family and disabled it with spike strips.

Officers exchanged gunfire with Lopez, who was armed with an AR-15 assault-style rifle and a pistol, Jason Clark, a spokesperson for the Texas Department of Criminal Justice, said at a news briefing on Thursday evening.

“I will tell you that we are breathing a sigh of relief that Lopez will not be able to hurt anyone else,” Clark said, noting that no officers were injured during the shootout.

Earlier in the day, authorities discovered a family of two adults and three children dead in their weekend home in Centerville and their truck missing. The victims were not further identified.

In addition to the truck, other evidence linked Lopez to the murders, said Clark, who did not give details.

“There is some information for us to lead to believe that Gonzalo Lopez is the individual who broke into that residence and committed those murders,” Clark said.

Texas authorities had been conducting a manhunt for Lopez since May 12 when he escaped a prison bus after stabbing a corrections officer, hijacking the vehicle filled with other inmates and fleeing when it crashed.

Lopez, who was serving a life sentence for the 2005 murder and attempted murder of a police officer, made his escape in Leon County, about 110 miles north of Houston.