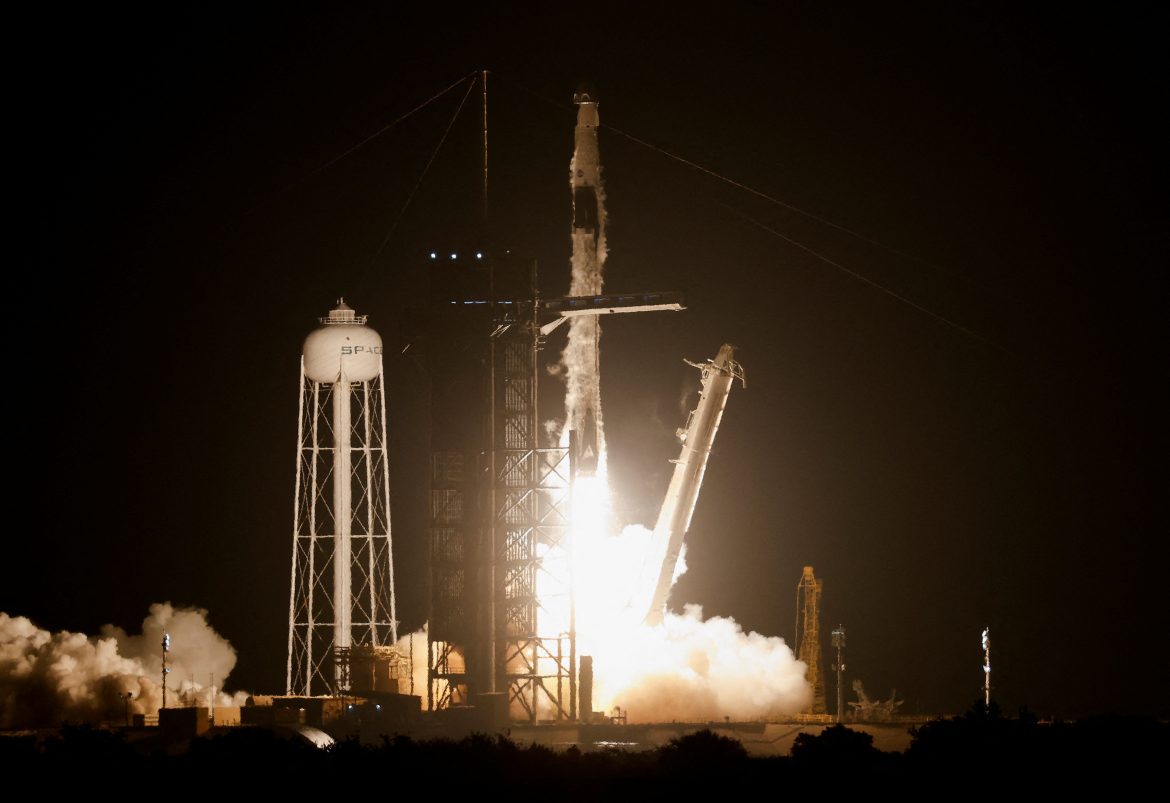 The three U.S. astronauts and their European Space Agency (ESA) crewmate were due to reach the space station after a 16-hour-plus flight to begin a six-month science mission some 250 miles above Earth, where they will be welcomed by a seven-person team including three Russian cosmonauts.

The mission marked the fourth full-fledged ISS crew NASA has launched aboard a SpaceX vehicle.

With a system built around a fleet of reusable rockets and crew capsules, it has launched seven human spaceflights in all over the past two years.

That includes a four-man team organized by Houston-based company Axiom Space that splashed down on Monday after a two-week stay aboard the ISS, capping the first all-private astronaut mission there.

A live NASA webcast of Wednesday’s liftoff showed the Falcon 9 ascending from the launch tower as its nine Merlin engines roared to life in billowing clouds of vapor and a reddish fireball that lit up the pre-dawn sky.

The four astronauts were seen strapped into the pressurized cabin of their capsule in white-and-black spacesuits moments after a launch that NASA and SpaceX officials later said unfolded without incident.

About nine minutes after liftoff, the rocket’s upper stage delivered the Crew Dragon into a preliminary orbit.

“Have a safe journey,” the SpaceX launch director radioed to the crew. “We’ll look forward to seeing you when you get home.”

An astronaut identified on the webcast as the Crew 4 flight’s commander, Kjell Lindgren, radioed back: “It is a privilege to get to fly this new vehicle … to orbit.”

Meanwhile, the Falcon 9 reusable lower-stage booster, after separating from the rest of the spacecraft, flew itself back to Earth and touched down safely on a landing platform floating in the Atlantic. It was the fourth flight and recovery of that booster.

Lindgren, 49, a board-certified emergency medicine physician and one-time flight surgeon, was making his second trip to the ISS, where he logged 141 days in orbit in 2015, performing two spacewalks and participating in more than 100 science experiments.

One was the “Veggie” lettuce project that marked the first time a U.S. crew member ate a crop grown in orbit.

Seated beside him on the fully automated flight was rookie astronaut Bob Hines, 47, a U.S Air Force fighter and test pilot who has accumulated more than 3,500 hours of flying time in 50 types of aircraft and flown 76 combat missions.

Another crew member making her debut spaceflight was Jessica Watkins, 33, a geologist who earned her doctorate studying the processes behind large landslides on Mars and Earth and went on to join the science team for the Mars rover Curiosity at NASA’s Jet Propulsion Laboratory.

She was to become the first African American woman to join a long-duration mission aboard the ISS.

Rounding out Crew 4 was Samantha Cristoforetti, 45, an ESA astronaut and former Italian Air Force fighter pilot making her second flight to the space station and set to assume command of ISS operations during the team’s six-month stint, becoming Europe’s first woman placed in that role.

Besides joining the trio of cosmonauts already aboard the station, the Crew 4 astronauts will be welcomed by the Crew 3 counterparts who preceded them – three Americans and a German ESA crewmate due to end their mission in early May.

The ISS, the largest artificial object in space, spanning the size of an American football field end to end, has been continuously occupied since November 2000, operated by a U.S.-Russian-led international consortium of five space agencies from 15 countries.

An international crew of at least seven typically lives and works aboard the platform while traveling at 5 miles per second, circling Earth once about every 90 minutes.

The station’s microgravity environment provides scientists a unique laboratory to run experiments on everything from fluid mechanics and combustion to cell growth and aging.