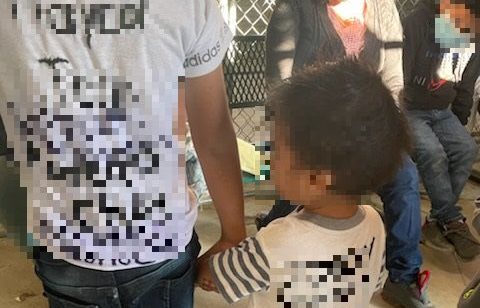 Two Guatemalan brothers, aged 2 and 6, were found abandoned at the southern border with notes scrawled across their t-shirts in marker to identify them, the U.S. Customs and Border Protection reported.

Border agents with the Rio Grande City Border Patrol Station (RGC) made the discovery at around 6:20 a.m. on Tuesday, reporting that the young siblings were found with a group of 18 migrants that included six other unaccompanied children.

“This morning, RGC agents encountered a group of 18 migrants near La Grulla. Amongst the group were two Guatemalan unaccompanied brothers, ages 6 & 2. Their shirts were scribbled with the names and phone numbers of their U.S. contact,” Acting Chief Patrol Agent Joel Martinez said in a tweet.

This morning, RGC agents encountered a group of 18 migrants near La Grulla. Amongst the group were two Guatemalan unaccompanied brothers, ages 6 & 2. Their shirts were scribbled with the names and phone numbers of their U.S. contact.https://t.co/zxki1OriLJ pic.twitter.com/xNYFKH3CyL

A Border Patrol Emergency Medical technician said the boys appear to be in good health following a medical screen.

Of the more than 444,000 migrants encountered by Border Patrol agents in the Rio Grande Valley sector this fiscal year, 71,000 were unaccompanied minors.

“Many of the unaccompanied children encountered by Border Patrol are very young and unable to provide names or phone numbers of family members,” the Border Patrol said in a press release. “To locate a (child’s) next of kin, agents must rely on information written on articles of clothing or handwritten notes found among their property, adults within the group, and/or the consulate of their home country.”

The heartbreaking discovery further underscores the devastating human toll of a border crisis that has brought with it unprecedented human smuggling, drug trafficking, migrant deaths, and the loss of over 100,000 American lives due to drug overdoses.

Republicans use government shutdown as leverage

Some Republican lawmakers are using the threat of a government shutdown as leverage to force the Biden administration to address the crisis, saying they won’t support must-pass government funding legislation that does not include provisions to secure the U.S.-Mexico border.

“Under Biden and Pelosi, there have been more than 3.5 million illegal border crossings — more than the entire population of Chicago,” House Minority Leader Kevin McCarthy (R-Calif.) said in a tweet.

“If Biden [and] Democrats don’t use this government funding bill to address the border crisis immediately, I’m voting NO on this bill, and I urge my colleagues to do the same,” McCarthy wrote.

Rep. Chip Roy (R-Texas) was more direct in his message to his Republican colleagues, calling out those who complain about the border crisis but won’t take any real action to hold the Biden administration accountable.

“Congressional Republicans must refuse to hand over another hard-earned taxpayer dollar to Biden’s DHS and ICE until they cease undermining national sovereignty by letting record-high numbers of cartels, terrorists, fentanyl, and illegal migrants flood our border,” Roy wrote in a fiery op-ed for the Washington Times.

“No more blank checks for this administration’s reckless and tyrannical agenda,” he continued.

‘Uncharted’ sell-off in U.S. stocks has investors wondering when the pain stops