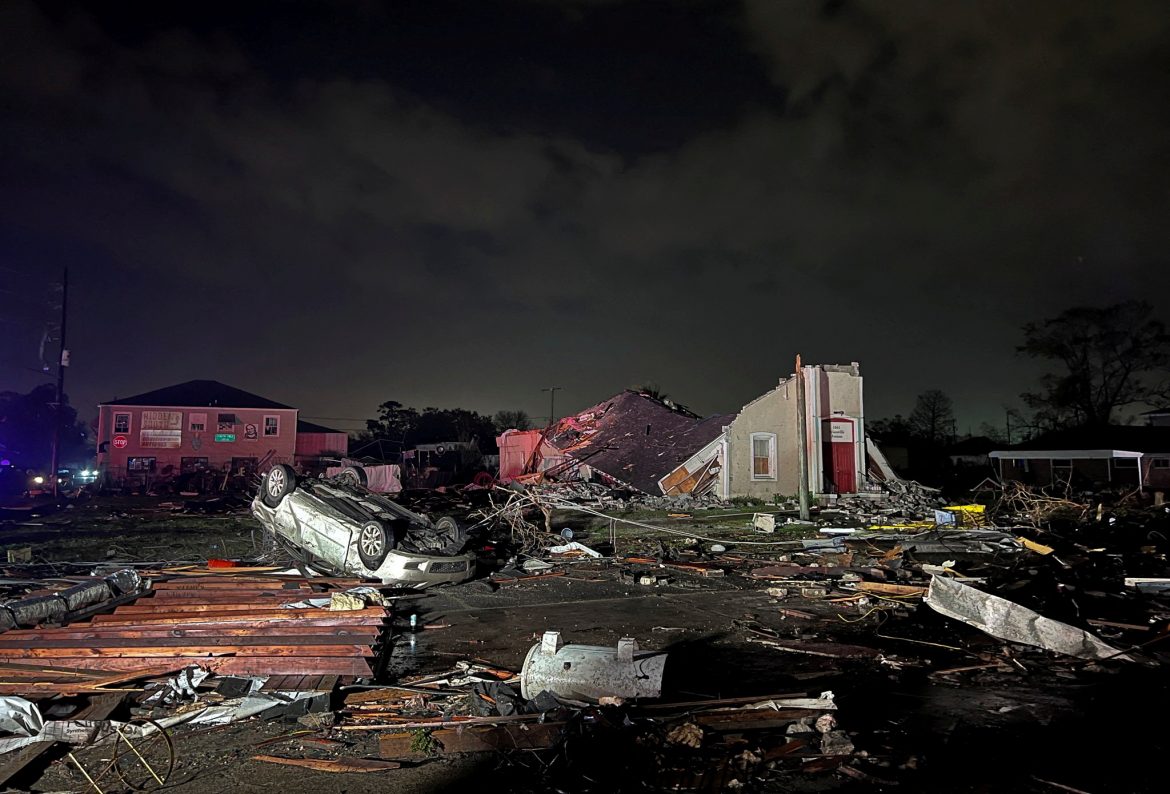 A tornado blasted through New Orleans on Tuesday, killing at least one person, destroying homes and knocking down power lines, media reported, in another setback for an area that has yet to fully recover from last year’s Hurricane Ida.

A dark funnel cloud touched down in the city and plowed through neighborhoods, pictures on social media showed, with damage reported in the communities off Arabi, Gretna and St. Bernard Parish.

The Washington Post, citing a spokesman for McInnis, said the person killed was a 26-year-old man who first responders found outside his home in the Arabi neighborhood.

Some other residents had been hospitalized with non-life-threatening injuries, the spokesman told the Post, but there was no official tally of the number of casualties.

“We had five or six houses totally demolished. There were people in the homes, so far everyone is accounted for,” McInnis said on WDSU television.

In Arabi, the tornado blew off roofs and knocked over trees and utility poles, NOLA.com reported.

A video posted on Twitter by Fox8 television showed firefighters near a house in Arabi with no roof and its walls toppled over.

Much of southern Louisiana is still recovering from Hurricane Ida, a fierce Category 4 storm that came ashore last August, devastating rural communities to the south of New Orleans and killing more than 100 people in the South and Caribbean.

The majority Black city of New Orleans, known for its jazz, Cajun-influenced cuisine and history as a major slave port, is still traumatized by 2005’s Hurricane Katrina, one of the largest and most powerful storms in U.S. history, which killed at least 1,800 people.

Tuesday’s tornado struck a day after twisters destroyed homes and injured people elsewhere in the region.

Power was reported out for more than 17,346 customers in Louisiana, 25,923 in Texas and more than 11,646 in Mississippi, according to the poweroutage.us website.

The storm front brought heavy rain and powerful winds to Louisiana, Mississippi and Alabama. National Weather Service forecasters had earlier warned that some 5 million people in the region could see dangerous weather.

“This is the typical time of the year for these events to unfold. Springtime is prime for severe weather,” said Roger Erickson, a National Weather Service meteorologist in Lake Charles, Louisiana.

School districts across the region canceled classes and Louisiana State University in Baton Rouge closed its campus for the day.