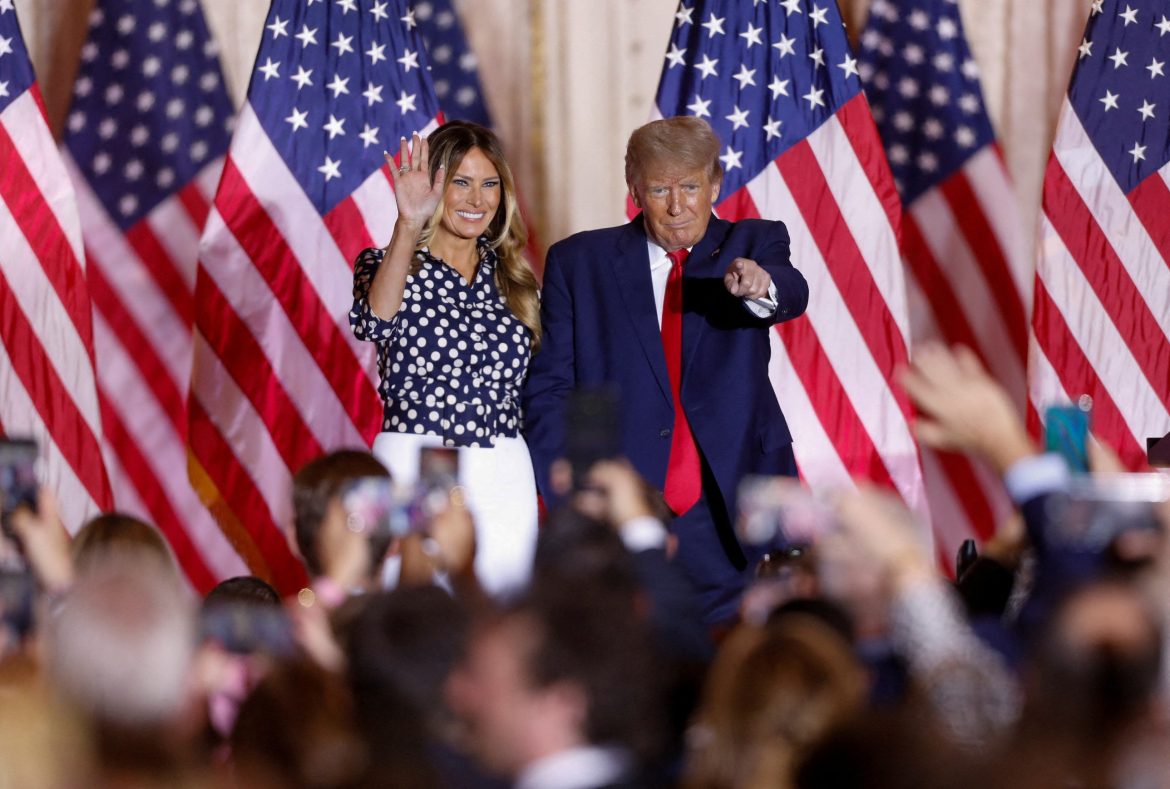 On Tuesday night, former President Donald Trump announced his much-anticipated candidacy for the 2024 Presidential nomination, surrounded by family and friends on his Mar-a-Lago estate.

“In order to make America great and glorious again I am tonight announcing my candidacy for President of the United States,” Trump said to cheers from the crowd.

He teased the announcement a week earlier, on the eve of the 2022 midterm elections, saying, “I’m going to be making a very big announcement on Tuesday, November 15, at Mar-a-Lago in Palm Beach Florida. We want nothing to detract from the importance of tomorrow.”

He began Tuesday’s speech by thanking his supporters, both in attendance and watching from home, “You and all of those watching are the heart and soul of this incredible movement … this great movement of ours, never been anything like it, and perhaps there will never be anything like it again.”

He touched on his time as president and reflected on the state of the nation before he left office in January 2021.

“Two years ago when I left office the United States stood ready for its golden age.” Trump said, “Our nation was at the pinnacle of power, prosperity, and prestige, towering above all rivals, vanquishing all enemies, and striding into the future confident and so strong.”

He then discussed the pitfalls of the past two years under the Biden administration, highlighting inflation, energy issues, the border crisis, and a weak foreign policy, including the prospect of nuclear war.

He categorized the Left as having a “platform of national ruin,” in contrast to his platform of “national greatness and glory to America.” He further stated that while the Left uses government domination and control, his approach would be based on freedom, values, individual responsibility, and common sense.

Touching on the midterm elections, Trump acknowledged the criticism from members of the Right who say Republicans should have won by a greater margin. He admits that they are correct, but suggests that the reason more seats weren’t won was because many Americans still don’t realize the “gravity of the pain our nation is going through.”

He briefly reviewed his endorsement statistics for the midterms, saying his endorsements had 232 wins and only 22 losses. He also took a moment to encourage Georgia voters to cast their ballots for Hershel Walker in the upcoming Senate run-off election.

Regarding the future, he laid out his political agenda, which included reducing inflation back to 1%, ending American energy dependence, strengthening national security, voting reform, securing the southern border, and conducting an overhaul of our national security agencies.

Political commentator Tomi Lahren posted on Twitter prior to the announcement, “What I’m hoping to hear tonight from Trump is how he would save this country like he did before. I hope he lets the 2020 vendetta go and returns to America first. We need classic, not bitter, Trump!”

What I’m hoping to hear tonight from Trump is how he would save this country like he did before. I hope he lets the 2020 vendetta go and returns to America first. We need classic, not bitter, Trump! #trump

Trump has been outspoken over the last two years about his opinion of the 2020 election result. However, during Tuesday’s announcement, he refrained from discussing the 2020 election in depth, save to mention China may have had some involvement.

Instead, he brushed over President Joe Biden’s current term in office, the period between Trump’s first term and potential second term, as “the pause”. Trump encouraged his supporters that there was a benefit to this pause, which is the opportunity for the American people to witness how poorly the Biden administration has done.

Kari Lake, the Trump-endorsed Republican candidate who, according to projections, just lost her gubernatorial run in Arizona, tweeted that Trump has her “complete and total endorsement.”

He has my complete and total endorsement! pic.twitter.com/XwQoOOT1ei

In anticipation of Trump’s announcement, CNN released an interview clip with Trump’s former vice president, Mike Pence, in which they asked him if Trump should serve as president again. He responded, “I think that’s up to the American people. But I think we’ll have better choices in the future.”