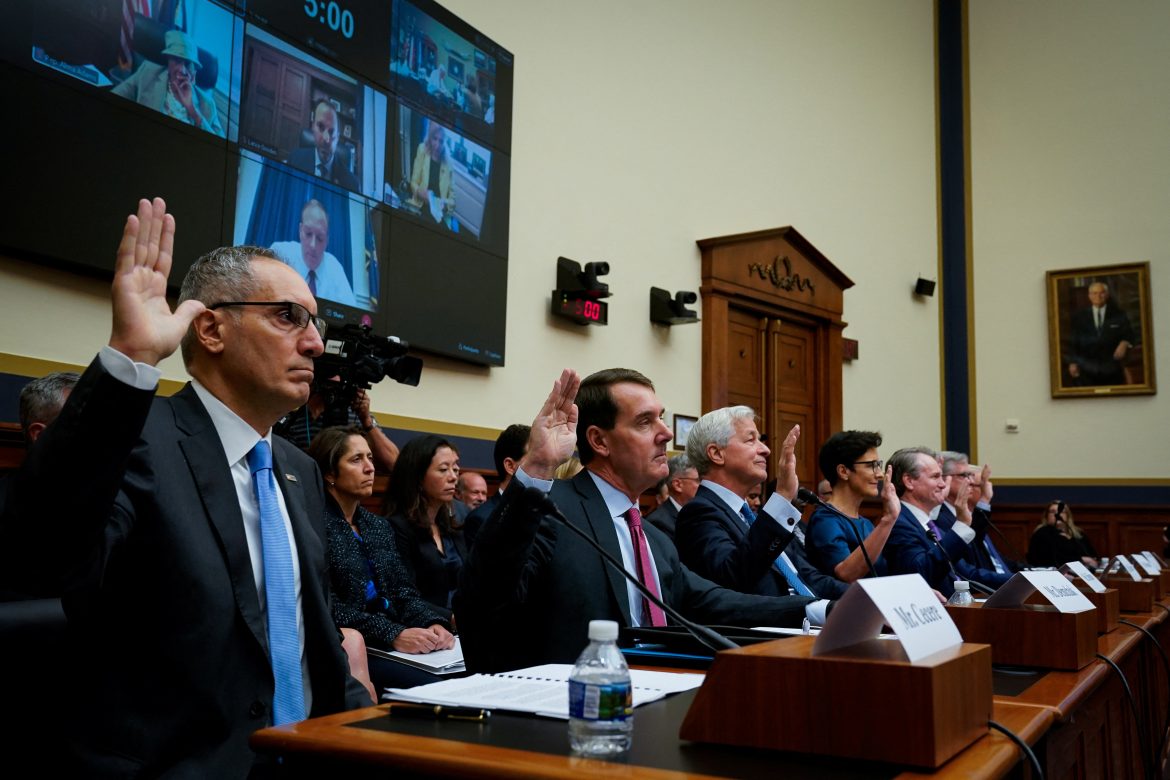 Some of the country’s top bank chiefs endorsed U.S. Federal Reserve rate hikes as a means to tame soaring inflation, noting that consumers continue to hold up well, when appearing before Congress during a wide-ranging and mostly sedate hearing on Wednesday.

In testimony before the House of Representatives Financial Services Committee, the CEOs also touted their financial strength, role in distributing billions of dollars in COVID-19 pandemic-related aid, and efforts both to boost lending in poorer communities and diversity within their ranks.

While such hearings rarely result in legislative action, they are risky for the CEOs, who were forced to defend their banks on issues including their ties to Russia and stances on firearms purchases and employee unionization at a time when lawmakers are looking to boost their profiles ahead of November elections in which control of Congress is at stake.

Top of mind for Republicans and Democrats alike, however, was the impact of soaring inflation on the economy and banks’ customers.

Dimon and Moynihan said consumers continue to be in good shape, with spending holding up well, and both said interest rate hikes were necessary for getting a grip on inflation.

While Moynihan acknowledged that that meant higher borrowing costs on key consumer products like mortgages, “the reality is it needs to be done,” he said. The central bank announced it was raising rates again by 75 basis points on Wednesday afternoon.

As interest rates rise, Fraser said she expected people with lower credit scores to experience greater financial stress. Savings rates, which soared during the COVID-10 pandemic as Americans stayed at home, will probably decline, she added.

“We’re going to be in for tougher times ahead,” Fraser said.

Dimon said there is a chance of a mild U.S. recession which could be worse depending on the course of Russia’s war in the Ukraine, which has created uncertainty over global energy and food supplies.

When pressed on risks to the U.S. financial system, Fraser later added that energy supply shocks in Europe could affect the U.S. economy by reducing demand for American goods and services.

Dimon said the Ukraine conflict, which Russia calls a special military operation, and growing tensions with China, were the biggest vulnerability to global financial stability.

While the hearing was generally cordial, some lawmakers went after the CEOs over their institutions’ business operations in Russia as well as China, whose increasingly bellicose stance on neighboring Taiwan is causing growing tension with Washington.

California representative Brad Sherman, a Democrat, pressed Dimon and Fraser about their Russian clients, sparking a brief, contentious exchange in which Dimon – known for his blunt and forthright style – attempted to interject while Sherman was speaking.

In an unusual line of questioning for a Republican congressman supportive of the industry, Blaine Luetkemeyer pressed Dimon, Fraser, and Moynihan on how they would respond were China to invade Taiwan, which Beijing views as sovereign Chinese territory.

In such an event, the executives said they would do as the U.S. government instructed. “We will follow the government’s guidance which has been for decades to work with China. If they change the position, we will immediately change it as we did in Russia,” said Moynihan.

The Bank of America CEO warned that the long-term competitiveness of China’s banks was the “real issue” for concern. “They could acquire any of us without much problem, in terms of financial resources.”

The CEOs also faced criticism from Republicans frustrated with what they see as Wall Street’s increasingly liberal leanings on the environment and firearms. Banks dispute that characterization.

At one point far-left Rep. Rashida Talib (D-Mich.) pressed the executives to immediately remove funding from the fossil fuel industry, to which JPMorgan CEO Jamie Dimon responded, “Absolutely not, and that would be the road to hell for America.”

Rep. @RashidaTlaib challenges bank CEOs to agree to stop funding fossil fuels, is rejected by every single one

Jamie Dimon: "That would be the road to Hell for America" pic.twitter.com/U7yr6AbtyF

Some Republicans pressed the executives on how they would handle gun transactions days after an international standards body approved a new merchant code for gun retailers.

“I fear this is one step closer to a backdoor gun registry,” said Rep. Alex Mooney, a Republican from West Virginia.