Public health specialists have for months warned the U.S. government that shuffling detainees among immigration detention centers will expose people to COVID-19 and help spread the disease.

U.S. Immigration and Customs Enforcement (ICE) has continued the practice, saying it is taking all necessary precautions.

It turns out the health specialists were right, according to a Reuters review of court records and ICE data.

The analysis of immigration court data identified 268 transfers of detainees between detention centers in April, May and June, after hundreds in ICE custody had already tested positive for COVID-19, the disease caused by the novel coronavirus.

This tally is likely just a small fraction of all transfers, former ICE officials said. ICE does not release data on detainee moves, and court records capture only a smattering of them.

At least one transfer resulted in a super-spreading event, according to emails from ICE and officials at a detention center in Farmville, Virginia, court documents, and interviews with more than a dozen detainees at the facility.

Until that transfer, only two detainees had tested positive at the Farmville center — both immigrants transferred there in late April. They were immediately isolated and monitored and were the only known cases at the facility for more than a month, court records state.

Then on June 2, ICE relocated 74 detainees from Florida and Arizona, more than half of whom later tested positive for COVID-19. By July 16, Farmville was the detention center hardest-hit by the virus with 315 total cases, according to ICE data. 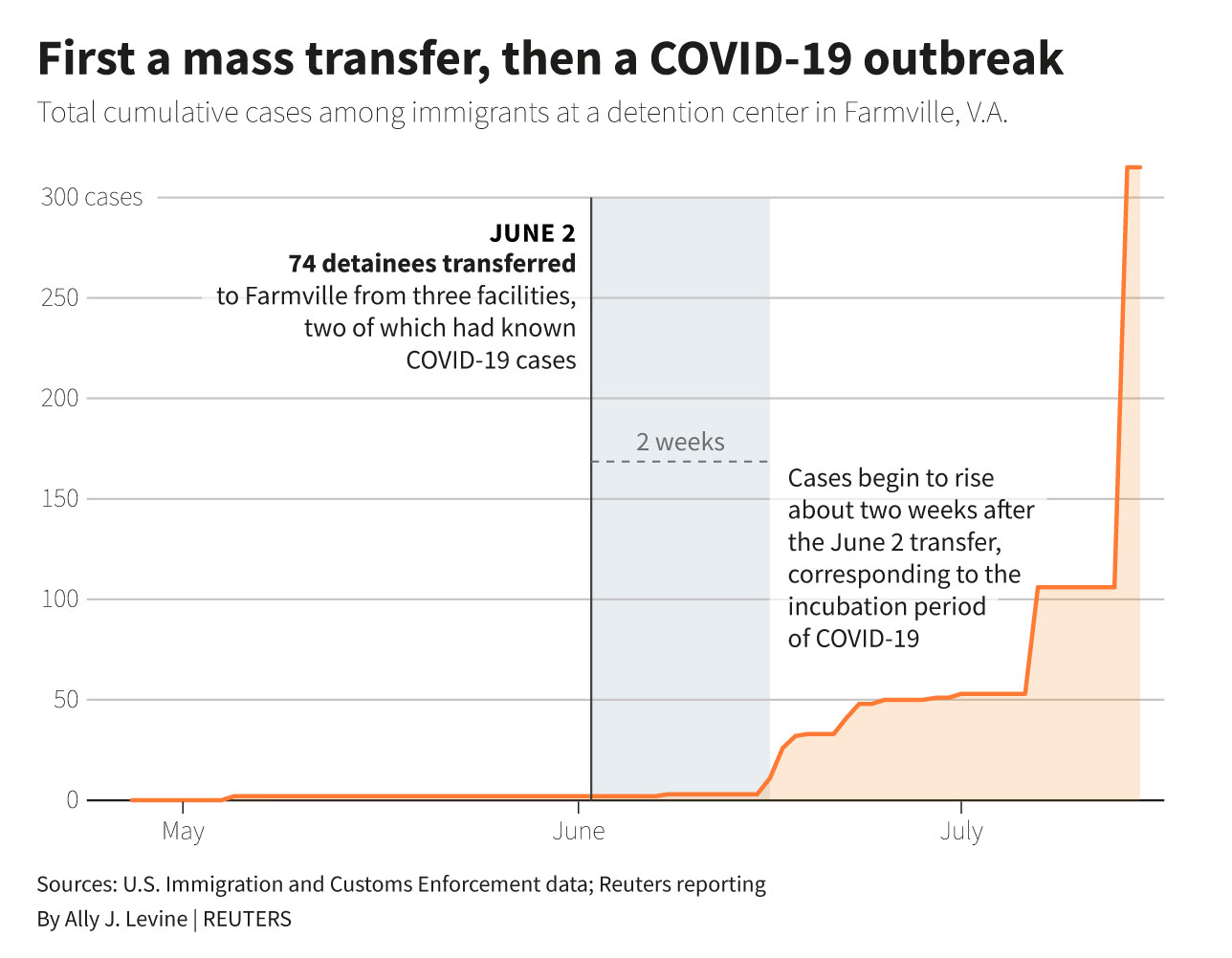 Faced with an outbreak, Farmville tested all detainees in the first few days of July. Of 359 detainees tested, 268 were positive, according to an ICE statement in response to questions from Reuters. While the majority are asymptomatic, it said, three detainees, are hospitalized.

The ICE statement said the agency was committed to the welfare of all detainees and continued some transfers to reduce crowding. ICE did not respond to a request for comment on Reuters’ analysis.

Former ICE officials and immigration attorneys say the agency regularly transfers people in custody for myriad reasons, including bed space, preparing migrants for deportation, and security reasons. With the pandemic still raging in the United States, lawmakers have called on ICE to halt the practice.

Prisons and detention centers have been disproportionately affected by coronavirus outbreaks. Large numbers of people confined in close quarters with insufficient access to medical care and poor ventilation and sanitation all create a breeding ground for viral infections, infectious disease doctors say.

As of July 16, ICE had reported 3,567 confirmed cases of COVID-19 in its detention centers, and three detainees have died. The actual number infected is almost certainly higher, Franco-Paredes said, since not all centers are doing widespread testing.

About 22,000 detainees are in ICE custody, down from more than 35,600 who were being held at the end of March when the first COVID-19 case was detected among detainees. Since then, about 13,500 tests have been done, but that likely includes some immigrants who have since been released. 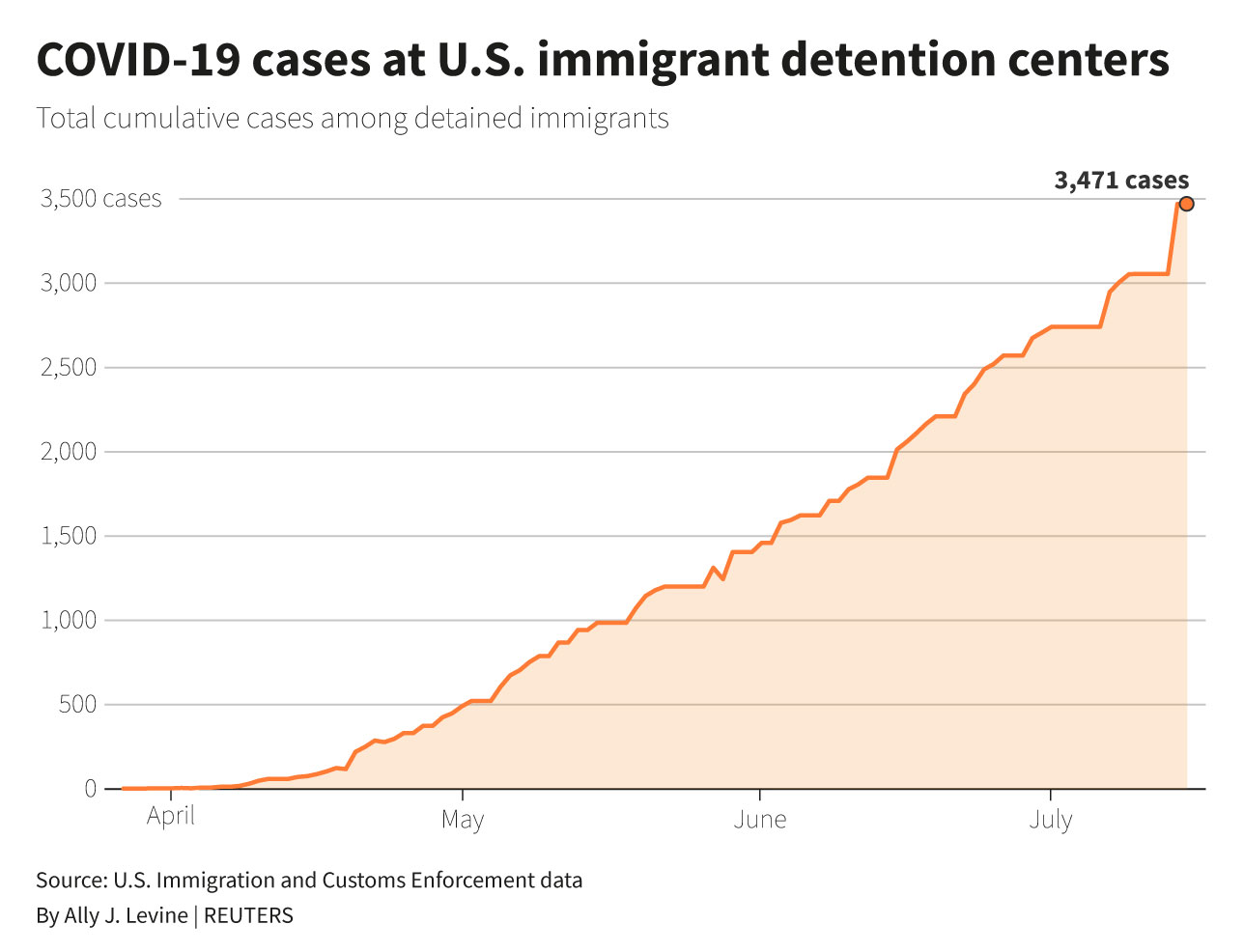 To be sure, detainee transfers are not the only means of introducing the virus to a detention center. Employees with the disease are another main source of transmission, public health specialists said. Nearly 1,000 detention center employees have tested positive for the virus.

Before it transfers detainees, ICE policy is to screen them for fevers and other symptoms, but not to test for the disease. Those with positive or suspected cases of COVID-19 are isolated from other detainees, ICE says.

But the case of Farmville shows that efforts to keep sick and healthy detainees separate don’t always prevent the spread.

A week after the out-of-state transferees arrived at the Farmville center, three of them tested positive for the virus while still quarantined from the general population. In response, center officials decided to test the entire group of new arrivals, according to an email from ICE deputy field office director Matthew Munroe to immigration attorneys. Fifty-one tested positive.