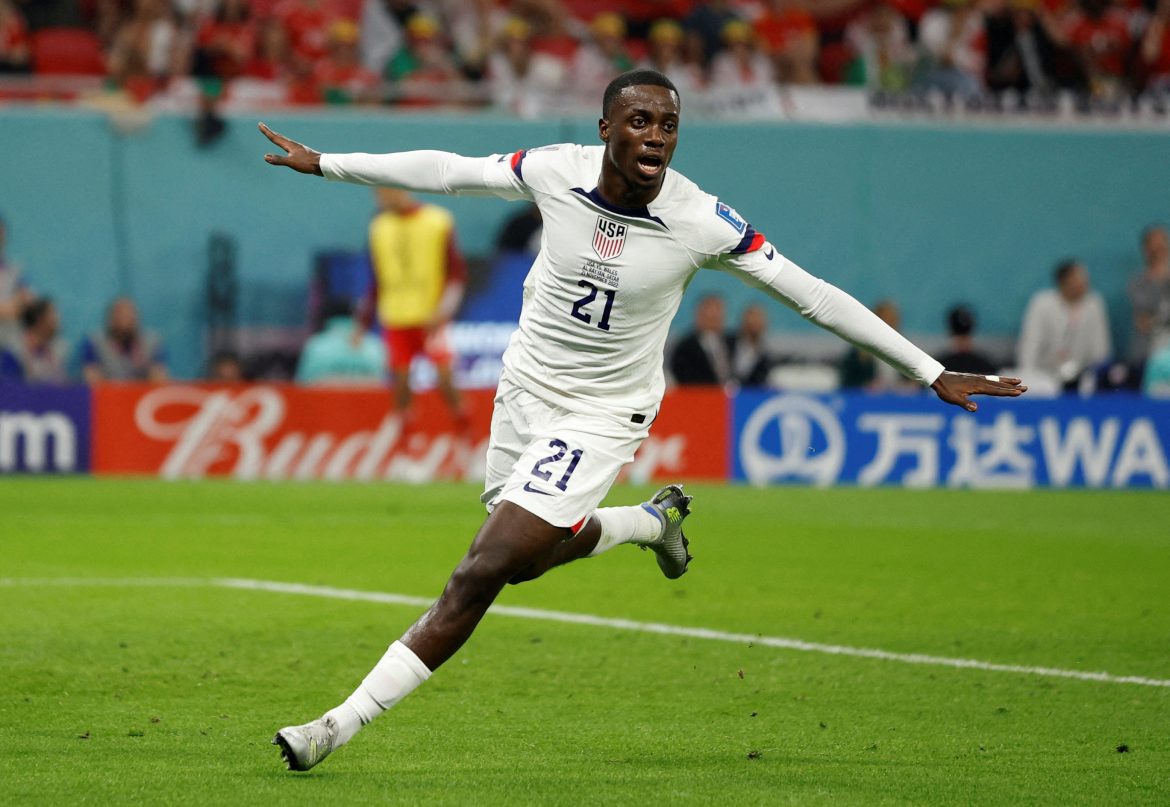 Wales’ talisman Gareth Bale scored a late penalty as they rallied in the second half to secure a 1-1 draw with the United States in an enthralling World Cup Group B clash at a raucous Ahmad bin Ali Stadium on Monday.

It was the proverbial game of two halves as the U.S. went into the break with a deserved 1-0 advantage handed to them following a superb finish by Timothy Weah, the son of former World Player of the Year and current Liberia president George.

THE @USMNT TAKES THE LEAD 🇺🇸🇺🇸🇺🇸

But a switch in tactics by Wales at the break to introduce target man Kieffer Moore changed the game and allowed them back into the contest, resulting in Bale scoring the 82nd minute penalty he had earned after being fouled.

Bale sends the penalty home and ties it for Wales! 🏴󠁧󠁢󠁷󠁬󠁳󠁿 pic.twitter.com/XCU4Hohfd9

“To go a goal behind against a good team like the U.S., we showed character, credit to the lads for coming back and getting a point,” said Wales coach Rob Page.

“When we got the penalty we knew who was taking it, one million percent. He’s never let us down has he? It’s all about Bale and rightly so.”

Wales picked up their first point at the World Cup since their last appearance in 1958.

“It was 64 years but worth the wait,” Page said. “To see the Red Wall (Wales supporters) celebrating was incredible.”

The match was played in a fantastic atmosphere. Forget the valleys, the Welsh fans were drowning out Al Rayyan, but they met their match in the typically vocal American supporters, whose drum barely stopped beating.

The pattern of the first 45 minutes was U.S. possession and Wales trapped in their own half, unable to find an escape route without a recognized number nine to hold up the ball.

Instead, Bale and Dan James alternated down the middle with little joy, and whenever they cleared the ball it came straight back. The pressure finally took its toll after 36 minutes.

Christian Pulisic gained possession just inside the Welsh half and surged forward, spotting the clever run of Weah and providing a superbly weighted pass that was expertly finished by the winger as he slipped his shot past Wayne Hennessey.

Page made the key change at halftime when he replaced the ineffective James with the tall and muscular Moore, who was exactly what they had been missing in the opening period.

“It was nothing against Dan James, but the game suited Kieffer to get us up the pitch,” Page said. “We played over the top into Kieffer, it was a tactical decision.”

Wales were able to apply pressure and went close twice in quick succession. First Ben Davies forced a superb stop from U.S. goalkeeper Matt Turner before Moore headed the resultant corner just over with a chance he should have buried.

Wales’ pressure paid dividends as they won a penalty when Tim Ream, already on a yellow card for a cynical challenge earlier in the half, went through the back of Bale, who made no mistake from the spot as he thrashed the ball wide of Turner.

“You are going to have a little bit of nerves, but I am confident in my own ability,” Bale said. “I am the penalty taker. I have to take the responsibility.

“We were in a similar position in Euro 2020, where we went a goal down (against Switzerland in the opener) and showed our character to come back.

“One thing I know about this team is that we never give up. We keep fighting and we always find a way.”

U.S. coach Gregg Berhalter said Wales’ switch to a more direct style after halftime was difficult for his side to contain.

“They have a big team and they made it very difficult. They stepped up the pressure,” he said.

“But I thought the guys handled it well. We kept it up to the end, it was a hard-fought game and we left everything out there.”

Wales head into Friday’s game against Iran buoyed by the result, while the U.S. will rue two points dropped from a winning position as they face a crunch clash with impressive England, who earlier thrashed Iran 6-2.

Understanding and Managing Your Foundational Stocks