U.S. tells Russia to pull back from Ukraine or face painful sanctions 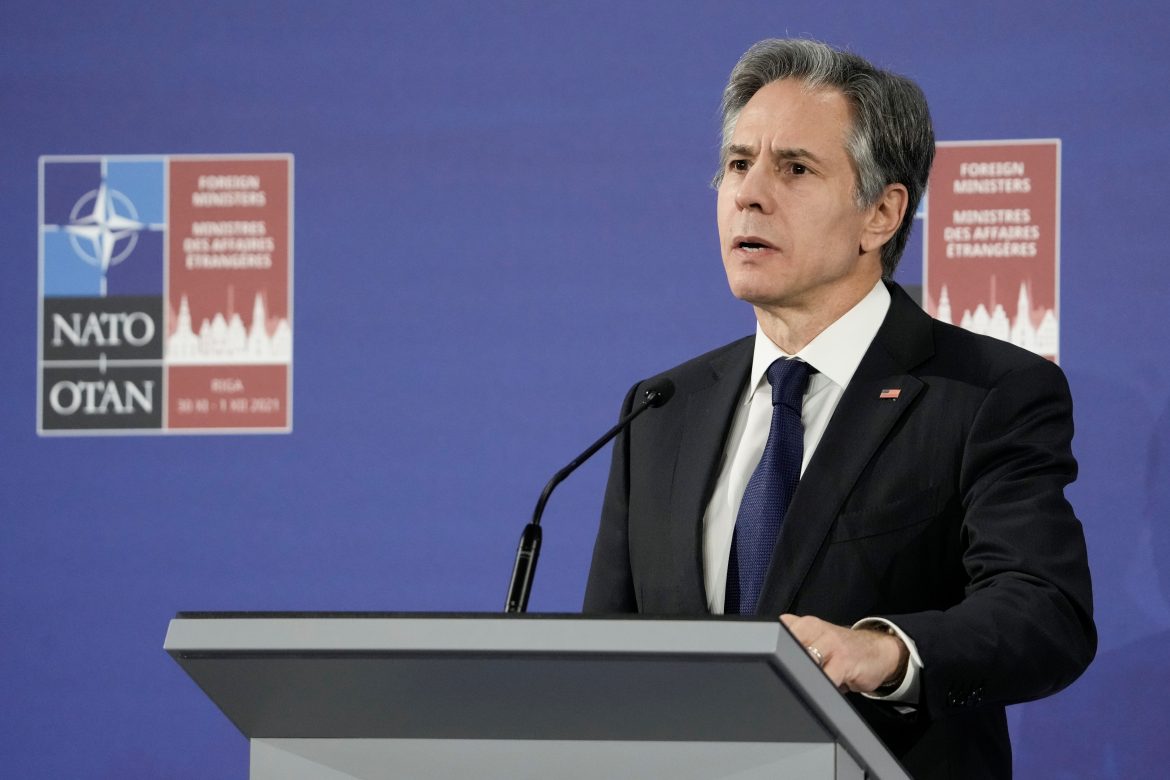 The United States urged Russia on Wednesday to pull back its troops from the Ukrainian border, warning that a Russian invasion would provoke sanctions that would hit Moscow harder than any imposed until now.

“We don’t know whether President (Vladimir) Putin has made the decision to invade. We do know that he is putting in place the capacity to do so on short order should he so decide,” U.S. Secretary of State Antony Blinken said.

“Should Russia follow the path of confrontation, when it comes to Ukraine, we’ve made clear that we will respond resolutely, including with a range of high impact economic measures that we have refrained from pursuing in the past.”

Blinken was speaking in the Latvian capital Riga after conferring with foreign ministers from NATO and Ukraine on how to respond to what Kyiv says is a Russian build-up of more than 90,000 troops near its border.

Russia seized the Crimean peninsula from Ukraine in 2014 but denies aggressive intent in the current crisis and says it is responding to threatening behavior by NATO and Ukraine.

The Kremlin said it feared Ukraine was gearing up to try to recapture by force areas controlled by pro-Russian separatists in the Donbass region in the east of the country – something Kyiv denies – and accused it of “very dangerous adventurism”.

It said Russia could not take any steps to de-escalate because of a large concentration of Ukrainian forces close to the border.

“I would like again to officially state that Ukraine does not plan any military offensive in Donbass. This is Russian propaganda nonsense in order to cover up Russia‘s own preparations for a potential attack.”

Blinken declined to spell out what sanctions Russia might face and encouraged both Moscow and Kyiv to return to diplomacy and revive a 2014 peace plan for eastern Ukraine.

Russia has blunted the impact of sanctions imposed over its invasion of Crimea by reducing its borrowings on foreign financial markets and maintaining large currency and gold reserves.

But the West has more potential leverage now if it were to target the newly built Nord Stream 2 pipeline under the Baltic Sea, through which Russia is keen to start pumping gas as soon as it gets the green light from a German regulator.

Ukraine has centuries of shared history with Russia and Moscow keenly resents its westward tilt since a pro-Russian president was ousted in a revolution in 2014.

It current aspiration to join both the European Union and NATO has made it the main flashpoint in Russia‘s deteriorating relations with the West.

Putin said on Wednesday that Moscow wanted serious negotiations with the United States and its allies to extract legal guarantees that would rule out any further NATO moves to the east and the deployment of weapons systems close to Russian territory.

A day earlier, the Kremlin leader said Russia was ready with a newly tested hypersonic weapon in case NATO crossed its “red lines” and deployed missiles in Ukraine.

“The problem with Russia is that they are not transparent, that they have a very aggressive rhetoric and a track record showing they have used military exercises before as a disguise for aggressive actions against neighbors,” he told the Reuters Next online summit.

Russia said it had started regular winter military drills in its southern military district, parts of which border Ukraine, and that 10,000 troops had relocated to training grounds across the huge area. Its ally Belarus has also announced joint military drills with Russia on the Ukrainian border.

Ukrainian President Volodymyr Zelenskiy said direct talks with Moscow were needed to end the war in the east, which Kyiv says has killed more than 14,000 people.

“We must tell the truth that we will not be able to stop the war without direct negotiations with Russia, and today this has already been recognized by all, all external partners,” Zelenskiy told parliament.