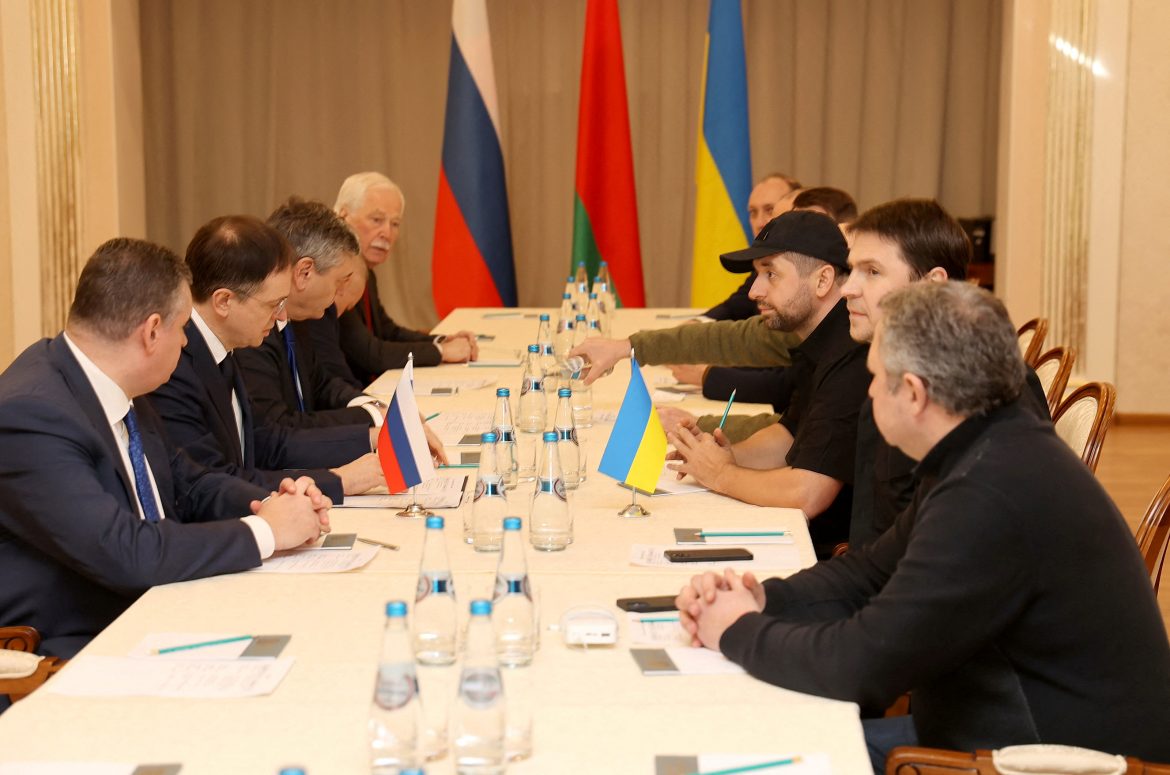 The Russian invasion of Ukraine entered its fifth day Monday following a night of heavy bombardment and intense street fighting in Kharkiv and Kyiv, as Ukrainians fight desperately to retain their hold on the capital.

Delegates from Ukraine and the Russian Federation met for talks on Monday morning near the Belarus-Ukraine border. Ukrainian President Volodymyr Zelenskyy had initially refused to engage in negotiations on Belarus territory, citing the Moscow-friendly nation’s decision to allow Russian troops to position themselves at its border ahead of their invasion of Ukraine. He reversed his decision, however, following a discussion with Belarus leader Alexander Lukashenko on Sunday.

“We agreed that the Ukrainian delegation would meet with the Russian delegation without preconditions on the Ukrainian-Belarusian border, near the Pripyat River,” Zelenskyy said in a statement, making it clear he seeks an immediate ceasefire. What the Kremlin wants from the talks remains unclear.

Lukashenko has publicly expressed his support for Russia’s unprovoked attack on its sovereign neighbor, urging Ukrainians to “stop” their confrontation with Russia and abandon their U.S. “masters.”  Intelligence reports also indicate that Belarus may be assisting Russia militarily in its war on Ukraine.

Tensions between Russia and the West have also ratcheted up significantly with Russian President Vladimir Putin hinting that the Ukraine war could become a broader nuclear conflict. Citing “aggressive statements” by NATO and increased financial sanctions, Putin on Sunday told his top defense and military officials to put nuclear forces in a “special regime of combat duty.” It remains unclear as to how the declaration might change the status of Russian nuclear forces, if at all.

Like the U.S., Russia keeps its land-based intercontinental ballistic missiles and submarine-based nuclear missiles at a high state of readiness at all times. Less than a year ago, Putin and Biden agreed that “nuclear war cannot be won and must never be fought” during their Geneva summit.

A senior U.S. official, speaking on condition of anonymity, said Putin is “potentially putting in play forces that, if there’s a miscalculation, could make things much, much more dangerous.”

Moscow has so far failed to gain full control of Ukraine’s airspace, despite advances across the country. U.S. officials say they believe the invasion has been more difficult, and slower, than the Kremlin envisioned. A senior U.S. Defense official said Russia had fired more than 350 missiles at Ukrainian targets since Thursday, with some hitting civilian infrastructure, according to the latest AP and Reuters reports.

The majority of Russian ground forces remain positioned roughly 18 miles to the north of Kyiv as logistical failures and fierce Ukrainian resistance continue to slow Russian troops in their goal to seize control of the capital. The Russian Armed Forces acknowledged casualties but have managed to encircle Kyiv. This has created an urgent humanitarian crisis for residents remaining in the capital, who are now worried about how long food and medicine supplies might last.

By late Sunday, Russian forces had managed to take control of Berdyansk, a Ukrainian city on the Azov Sea coast, according to Oleksiy Arestovich, an adviser to Zelenskyy’s office. Russian troops also made advances toward Kherson, another city in the south of Ukraine, while the port city of Mariupol, considered to be a key Russian target, is “hanging on,” according to Arestovich.

Meanwhile, Ukrainian authorities continue handing out weapons to any civilians willing to defend the city, and the Marine Corps Times reports the country is releasing prisoners with military experience who want to fight. University students in Kyiv were filmed making homemade bombs on street curbs on Sunday in an effort to fend off Russian troops.

Ukraine reports that 350 of its citizens have been killed, including 14 children. In Mariupol, where fighting was intense Sunday night, a 6-year-old Ukrainian girl was killed by Russian shelling. An Associated Press team filmed the desperate moments a medical team frantically tried to revive the young girl, who was dressed in unicorn pajamas and a jacket covered in blood.

One of the doctors who was pumping oxygen into the girl paused for a moment to look directly at the camera. “Show this to Putin,” he said angrily as the girl lay dying on a gurney. “The eyes of this child, and crying doctors.”

Zelenskyy called again on the European Union to admit Ukraine to the bloc “immediately” in a televised speech this morning, saying his people had earned the right to join.

“We appeal to the European Union to immediately admit Ukraine as a member under a new special procedure,” he said, according to a translation. “I’m convinced Ukraine has earned the right and that this is possible.”

European leaders in over 30 countries announced new sanctions and export controls in Moscow over the weekend, and the EU also said it would help arm Ukrainian forces.

Continue to follow FISM for updates on the West’s response to the war on Ukraine.