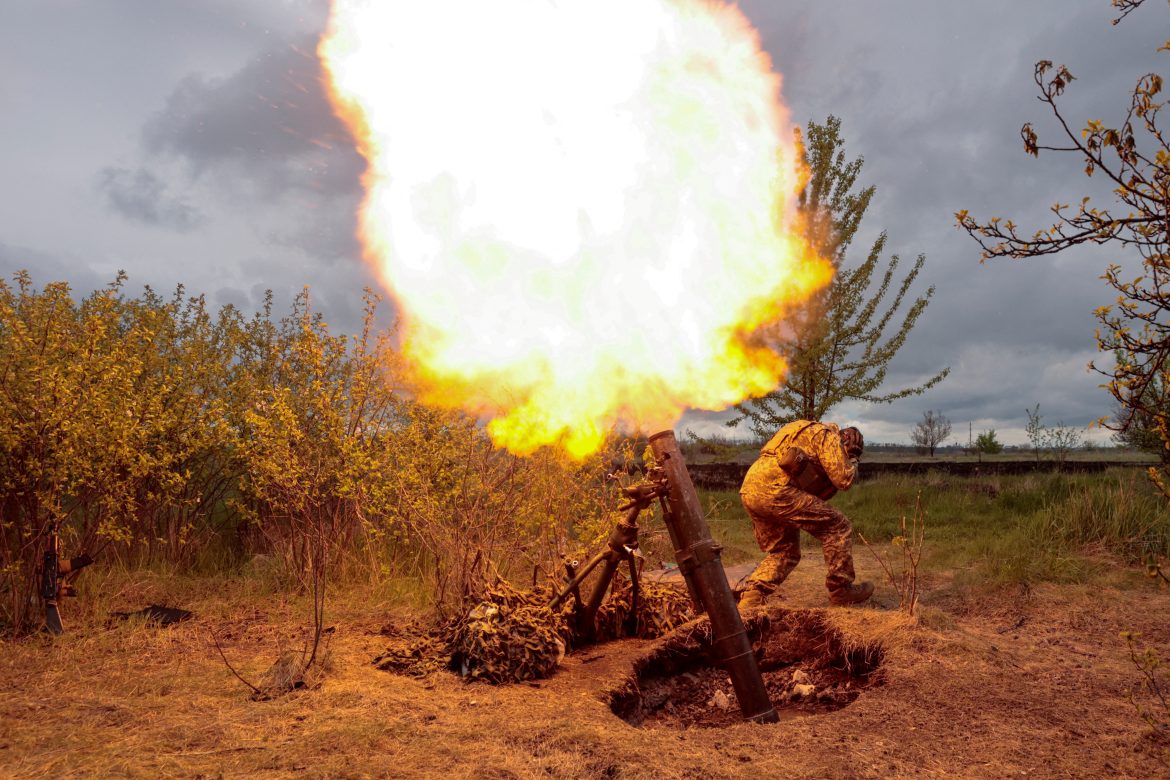 Ukrainian fighters are still defending the Azovstal steelworks factory in Mariupol despite a constant Russian onslaught and being vastly outnumbered. Valeri Paditel, who commands the border guards in the Donetsk region, said the fighters were “doing everything to make those who defend the city in the future proud.”

On Monday, Ukrainian and Russian officials reported that all of the civilians who had been sheltering in tunnels and bunkers beneath the bombed-out factory had been evacuated, but Petro Andryushchenko, an advisor to the Mariupol mayor, said Tuesday that “in addition to the military, at least 100 civilians remain.” Andryushchenko said that Russian forces attempting to storm the factory “remain unsuccessful,” despite continuing to pound the plant with heavy weaponry.

Andryushchenko released a video of a tattered Ukrainian flag flying over the Azovstal plant as a symbol of hope for the Ukrainian people. Soldiers had raised the flag earlier in the day on Monday.

May 9, 2022. Ukrainian defenders raise the 🇺🇦flag over besieged #Azovstal in #Mariupol.

Elsewhere, Ukrainian officials said Russia continues to pummel Ukraine’s vital southern port of Odesa, reporting multiple missile strikes overnight that destroyed a shopping center and a warehouse. The officials said one civilian was killed and five were wounded in the attack. To the northeast, the bodies of 44 civilians were discovered beneath the rubble of a building in Izyum in the eastern Donbas region that was bombed weeks ago.

“This is another horrible war crime of the Russian occupiers against the civilian population!” said Oleh Synehubov, the head of the regional administration, in a social media message announcing the deaths.

Some of the munitions used by Russian forces dated back to the Soviet era, according to Ukrainian officials, which means they are less precise than their modern versions. Officials from Ukraine, the U.S., and Britain have cautioned that Russia is rapidly depleting its stocks of precision weapons, which means they are relying more on outdated rockets that could end up hurting more civilians. Nevertheless, Ukraine’s Center for Defense Strategies noted that Moscow did use some precision hypersonic air-to-surface missiles against Odesa.

The Department of Defense acknowledged that there is evidence Ukrainian civilians are being forced into Russian filtration camps.

During a Monday press briefing, Pentagon Press Secretary John Kirby said the U.S. has “certainly seen indications” that Moscow is forcing Ukrainian citizens into Russian camps, though he said he is uncertain about the number of people involved or how many camps exist. The reporter who posed the question put the number of deported Ukrainians at 1.2 million, though this figure has not been independently confirmed.

“I don’t think we have that level of detail but we do have indications that Ukrainians are being taken against their will into Russia,” Kirby said, calling Russia’s actions “unconscionable” and “not the behavior of a responsible power.”

Every time you think [Russia] just can’t fall to a new low, they prove you wrong,” he added.

"We do have indications that Ukrainians are being taken against their will into Russia," Pentagon Spokesperson John Kirby says on reports of Ukrainians being moved into so-called "filtration camps" in Russia.

"Unconscionable, not the behavior of responsible power." pic.twitter.com/iE8WneulG2

Finland and Sweden are expected to make final decisions this week concerning NATO membership. Sweden has purposefully avoided military alliances for over two centuries while Finland adopted neutrality following its defeat by the Soviet Union in World War II. Both countries, however, signaled a readiness to join the alliance in the wake of Russia’s invasion of Ukraine. If they do, Russia will find itself completely surrounded by NATO countries in the Arctic and the Baltic Sea – an ironic development since one of Moscow’s chief objectives in its war on Ukraine is to create a buffer zone between Russia and NATO countries.