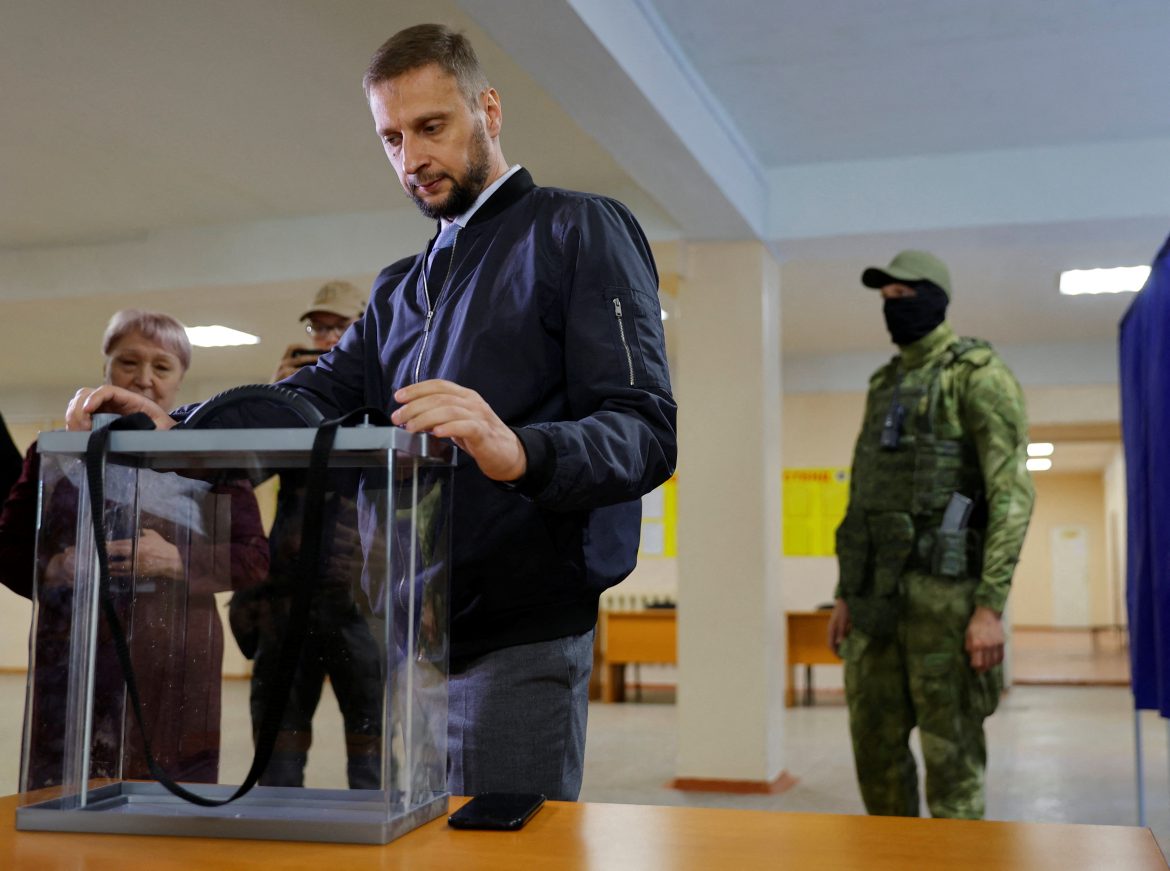 Russia on Friday launched referendums to annex four separatist regions of Ukraine. Authorities in the provinces threatened residents with punishment if they refused to vote and barred anyone from leaving.

The move follows Ukraine’s punishing counteroffensive that saw Kyiv reclaim large swaths of territory and has further heightened fears of nuclear conflict by providing Moscow with an opportunity to portray any attacks to retake the territory as a threat to Russia itself – a condition of the Kremlin’s nuclear weapons policy.

Putin on Wednesday said Russia would “use all the means at our disposal” to protect itself, alluding to the use of nuclear weapons. “This is not a bluff,” he said.

Voting in the provinces of Luhansk, Donetsk, Kherson, and Zaporizhzhia will continue through Tuesday. Together, the regions represent roughly 15% of Ukrainian territory.

In the town of Starobilsk, Kremlin authorities banned residents from leaving the city while armed groups went door to door forcing people to vote, according to Serhiy Gaidai, Ukraine’s Luhansk region governor.

“Today, the best thing for the people of Kherson would be not to open their doors,” Yuriy Sobolevsky, the displaced Ukrainian first deputy chairman of the Kherson regional council, said on the Telegram messaging app.

Ukraine and the West have condemned the referendums as illegitimate. The Organization for Security and Cooperation in Europe (OSCE), which monitors elections, said the outcomes would have no legal bearing because they fail to conform with Ukraine law or international standards and the areas are not secure.

Russia has portrayed the referendums as an opportunity for citizens in the region to express their views.

“From the very start of the operation…, we said that the peoples of the respective territories should decide their fate, and the whole current situation confirms that they want to be masters of their fate,” Russian Foreign Minister Sergei Lavrov said this week.

Ukraine says it will never accept Russian control of any of its territory and will fight until the last Russian soldier is ejected.

Alluding to what the West believes is Moscow’s strategic objective in staging the referendums, Dmitry Medvedev, deputy head of Russia’s national security council, warned that Moscow would henceforth deem any attack on the four territories as one on the Motherland itself.

“Encroachment onto Russian territory is a crime which allows you to use all the forces of self–defense,” Medvedev said in a Telegram post on Thursday, adding that any weapons in Moscow’s arsenal, including strategic nuclear weapons, could be used.

Meanwhile, Russian men desperate to escape a military draft are waiting up to 12 hours in lines to cross into Georgia, where visas are not required. Flights out of the country, which soared to as much as $5,000 per ticket, were quickly sold out overnight as social media groups offered advice on how to get out of Russia.

“This is panic demand from people who are afraid they won’t be able to leave the country later – people are buying tickets not caring where they fly to,” a tourism industry source told Reuters.

Others tried to cross the border into Finland, where the government says it is considering barring Russians from entry.

Kremlin spokesman Dmitry Peskov said on Thursday that reports of an exodus of draft-age men were exaggerated.

Protests against the mobilization popped up overnight. A rights group said Russian police detained more than 1,300 people in Russia on Wednesday who participated in protests. Still, the Vesna anti-war movement urged citizens to stage protests throughout Russia on Saturday.

On Friday, an independent commission formed by the U.N. Human Rights Council concluded that Russia is guilty of war crimes in Ukraine. The ruling followed investigations conducted in four regions of the country.

The Commission of Inquiry on Ukraine said on Friday that the ruling followed investigations conducted in four regions of the country previously occupied by Russian forces.

“Based on the evidence gathered by the Commission, it has concluded that war crimes have been committed in Ukraine,” Commission Chair Erik Møse told the Geneva-based Human Rights Council.

The commission found evidence of executions and torture, including sexual violence against victims ranging from age four to 82.

Investigations by the Council can be used before national and international courts, such as in the case of a former Syrian intelligence officer jailed for state-backed torture in Germany in January.

In his NATO address on Wednesday, Ukraine president Volodymyr Zelenskyy said Ukraine wanted “just punishment” for a crime Russia had committed against his nation, and that he would not accept any peace deal that did not include punishment towards Russia for the war crimes they have committed.