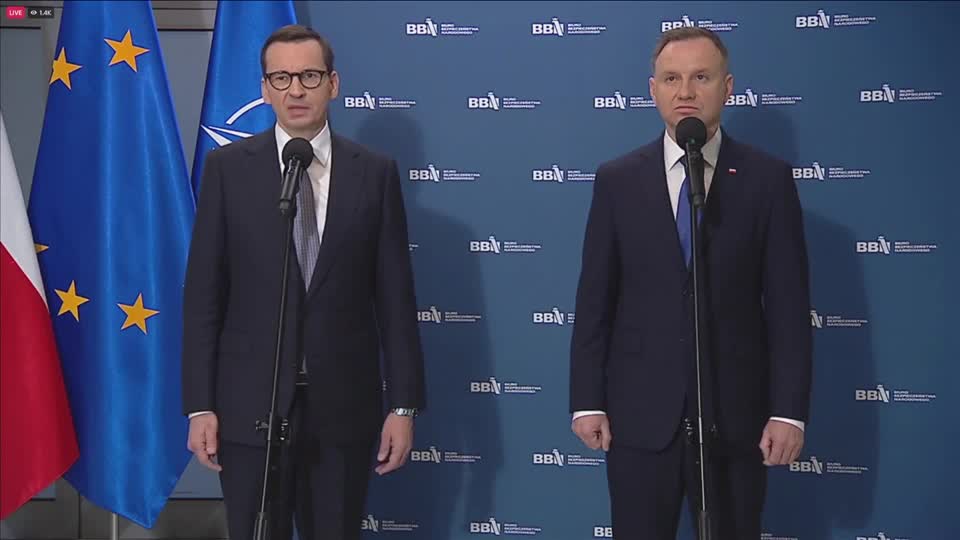 Poland’s president said on Wednesday that there is ‘no indication’ that Russia deliberately fired a missile that struck and killed two in Poland’s east, near the country’s border with Ukraine.

President Andrzej Duda said that the Soviet-era missile was likely launched from Ukraine in an effort to fend off a barrage of Russian missile strikes Tuesday, concluding that the incident was unintentional, The Associated Press reported. A deliberate attack on a NATO member would trigger a collective military response by the alliance that could have drawn the U.S. and other member nations into the conflict. News of the errant strike prompted a flurry of emergency meetings Tuesday.

“Ukraine’s defense was launching their missiles in various directions, and it is highly probable that one of these missiles, unfortunately, fell on Polish territory,” President Duda said on Wednesday. “There is nothing, absolutely nothing to suggest that it was an intentional attack on Poland,” he added.

NATO Secretary-General Jens Stoltenberg concurred with the assessment at an alliance meeting in Brussels, telling reporters, “An investigation into this incident is ongoing and we need to await its outcome. But we have no indication that this was the result of a deliberate attack.”

Tuesday’s air assault on Ukraine by Russia was the largest barrage of missile strikes of the war so far, with at least 90 rockets fired. Ukraine’s military said its forces brought down 77 rockets and 11 drones. As a former Soviet-bloc country, Ukraine has stocks of Soviet- and Russian-made weapons, including air-defense missiles, which could explain the confusion over which country launched the errant missile.

President Biden, who called an emergency meeting of G7 members at the Group of 20 summit in Indonesia late Tuesday, said that it was “unlikely” that Russia fired the missile, contradicting a statement made earlier in the day by a top U.S. intelligence official who told The Associated Press that the missile was fired by Russia.

Kremlin spokesperson Dmitry Peskov denounced the initial reaction to the incident, which included media reports that the missile was launched by Russia, and also praised the U.S. for its more measured response.

“We have witnessed another hysterical, frenzied, Russophobic reaction that was not based on any real data,” Peskov told reporters on Wednesday, pointing out that “immediately, all experts realized that it could not have been a missile linked to the Russian armed forces.” Peskov commended the “restrained, much more professional reaction” of the U.S. and President Biden.

German Chancellor Olaf Scholz warned against jumping to conclusions “in such a serious matter,” but nevertheless blamed the Polish casualties on Moscow.

“This wouldn’t have happened without the Russian war against Ukraine, without the missiles that are now being fired at Ukrainian infrastructure intensively and on a large scale,” Scholz said.

U.K. Prime Minister Rishi Sunak echoed that assessment, saying, “This is the cruel and unrelenting reality of Putin’s war.”

Ukraine’s President Zelenskyy said in his nightly video address Tuesday that Russia’s massive missile attack cut power to roughly 10 million Ukrainians. In a subsequent update, he said that Ukrainian repair crews had worked tirelessly through the night to reconnect 8 million users. Roughly 40% of Ukraine’s energy infrastructure has been destroyed by Russia.

Meanwhile, the U.N. Security Council is set to meet today for a previously scheduled briefing on the situation in Ukraine.

With U.S. government funding set to expire in a month, President Biden is asking Congress to approve $37.7 billion in additional emergency aid to Ukraine. The request is tacked onto a $9.25 billion COVID-19 funding request.

The massive spending request comes as Republicans are forecasted to take control of the House. GOP House Leader Kevin McCarthy, who on Tuesday secured his party’s nomination to take the gavel as Speaker in January, had previously said that Republicans wouldn’t support writing a “blank check” for Ukraine if they won control of the lower chamber.

Rep. Thomas Massie (R-Ky.) on Tuesday called for a freeze on Ukraine Funding and an audit of what has already been sent.

“We should immediately stop payments to Ukraine and begin a thorough audit of the $60 billion that Joe Biden and Congress have already sent there,” Massie said in a tweet on Tuesday.