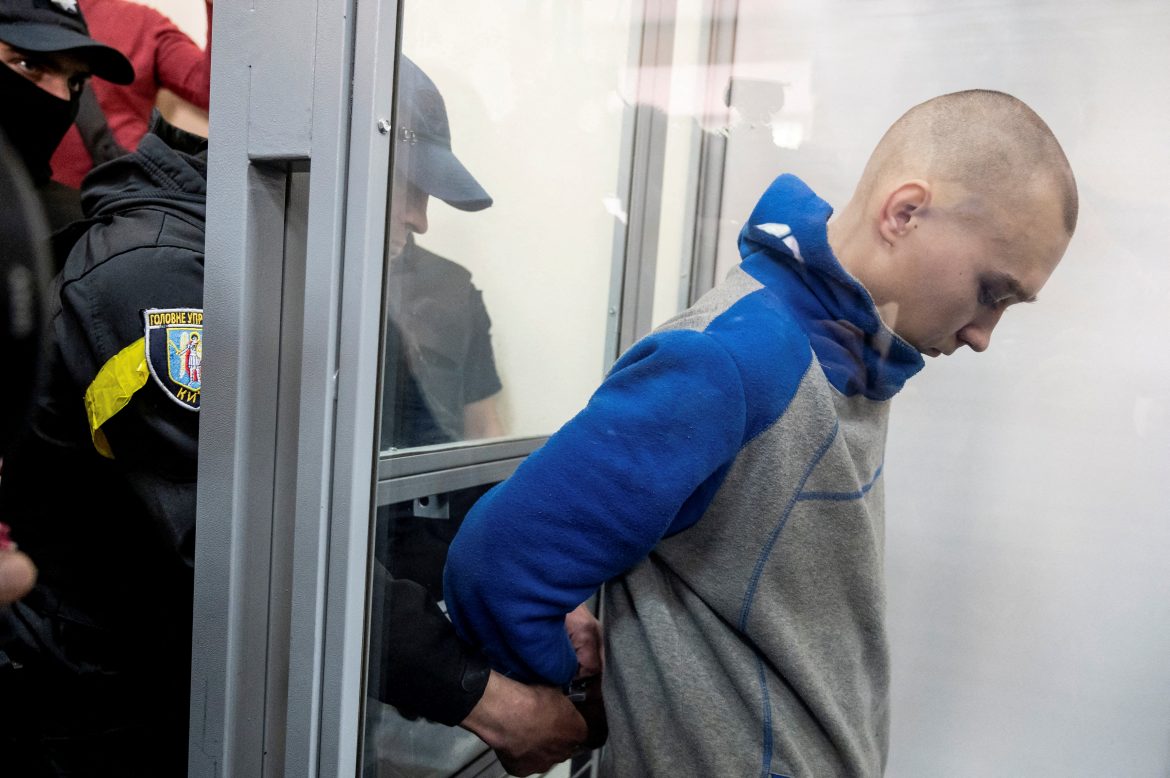 For the first time in three months, the American flag is flying once again in Kyiv with the official reopening of the U.S. embassy in Ukraine’s capital.

The embassy closed just days before Russia’s February invasion. Now, U.S. officials say that it is vital to have an American presence in Kyiv once again as the brutal war rages on. The embassy has stepped up security measures for the small number of diplomats who will work there initially.

“We are officially reopening operations,” spokesperson Daniel Langenkamp told Reuters Wednesday. Consular operations will not resume immediately, and the State Department’s no-travel advisory across Ukraine remains in place at this time, Langenkamp said.

Britain, Germany, and France had already reopened their respective embassies in Kyiv over the past month following the withdrawal of Russian troops from Ukraine’s north.

A Russian soldier who pleaded guilty to killing an unarmed civilian in Ukraine’s first war crimes trial now faces life in prison. Vadim Shishimarin, a 21-year-old tank commander, entered his plea in a Kyiv district court hearing Wednesday. He is charged with murdering a 62-year-old Ukrainian while the man was riding his bike in the northeast village of Cupakhivka on Feb. 28.

Ukraine has accused Russia of atrocities and brutality against civilians and said it so far has identified more than 10,000 possible war crimes. Russia continues to deny targeting civilians or any involvement in war crimes, instead accusing Kyiv of staging them to malign its forces.

The Russian military said Thursday that more Ukrainian fighters who were making a last stand in a bombed-out steel factory in Mariupol have surrendered, bringing the total number who have left their stronghold to 1,730. It is unclear whether any remain within the factory’s underground tunnels and bunkers.

The men, among whom scores have been seriously wounded, are being registered as prisoners of war under an agreement between Kyiv and Moscow, according to the International Committee of the Red Cross. Concern is growing for the soldiers now in Kremlin custody, as Russia has said they will investigate the men as terrorists. An untold number of the defenders were taken by Russian forces to a former penal colony in enemy territory.

Amnesty International is calling on Moscow to give the Red Cross immediate access to the surrendered fighters, citing lawless executions allegedly carried out by Russian troops in Ukraine. An official with the humanitarian organization said the Azovstal defenders “must not meet the same fate.”

Russia presses offensive in the east

Elsewhere, Ukraine’s military made no mention of the Mariupol defenders during a Thursday war briefing but said its forces continue to repel Russia’s offensive in several regions of the eastern front, the Associated Press reported.

Kremlin forces in the eastern Donbas region have been met with fierce Ukrainian resistance enhanced by Western-supplied defensive weapons.

A senior Pentagon official speaking on condition of anonymity confirmed Wednesday that “there just hasn’t been much progress in the Donbas” for Russia.

“They still have not corrected their coordination issues. They’re still not integrating their units very well. Their communications are still not very efficient between commanders,” the official said.

Ukraine did see some casualties overnight. Regional officials said four civilians were killed and three were wounded in a Russian bombardment in the town of Sievierodonetsk.

Elsewhere, it appears that Ukraine has gone on the offensive. The governor of Kursk province on the Russian side of the border said a truck driver was killed and several other civilians were wounded by shelling from Ukraine. Separatist authorities in the Donetsk region in eastern Ukraine also announced that two civilians were killed and five were wounded by Ukrainian shelling over the last 24 hours.

In Washington, President Biden will meet with the leaders of Finland and Sweden today after both countries departed from their longstanding neutrality and formally applied for NATO membership. The Nordic nations cited security concerns posed by Russia’s invasion of Ukraine as the reason behind their decisions.

“This is a historic event, a watershed moment in European security. Two nations with a long tradition of neutrality will be joining the world’s most powerful defensive alliance,” White House national security adviser Jake Sullivan said at a Wednesday briefing.

Sullivan told reporters that U.S. officials are confident that the objections of NATO member Turkey to the countries’ acceptance into the strategic alliance can be addressed.

Biden’s meeting comes as he seeks congressional approval for $40 billion in aid to supply Ukraine with more weapons and humanitarian assistance through September.