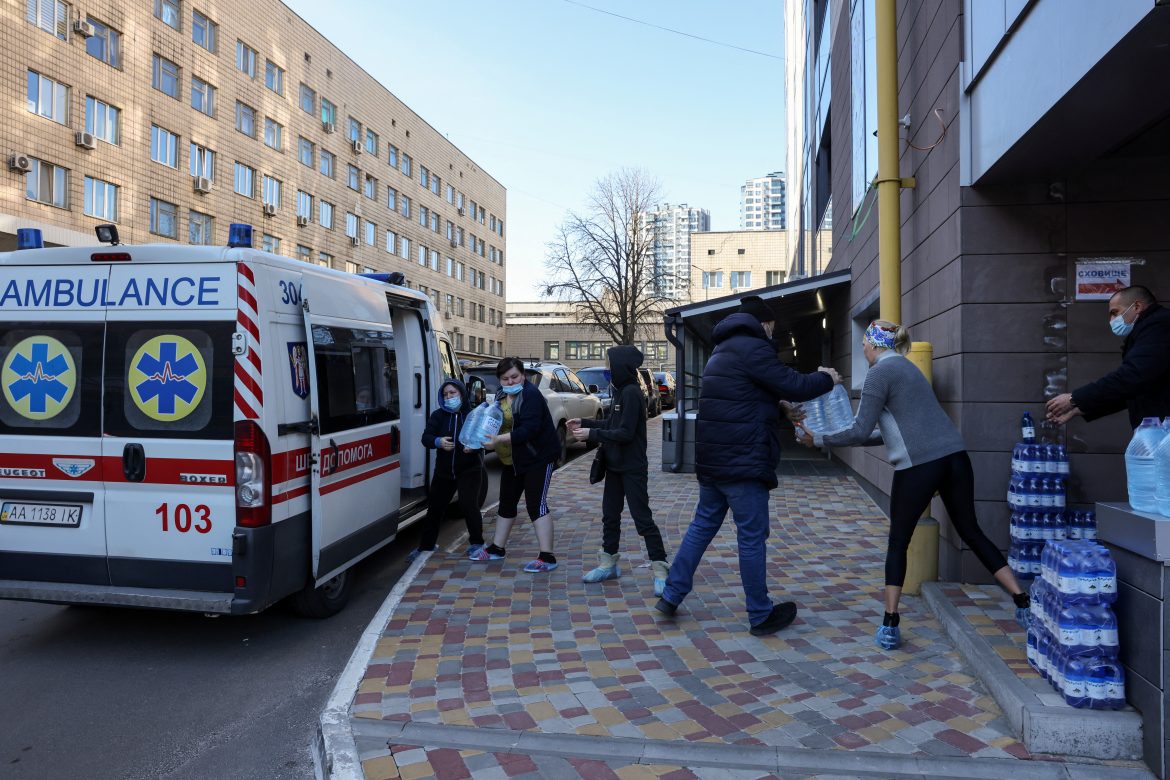 As Russia broadens its military offensive against Ukraine to include attacks on residential areas, its citizens face a growing and heartbreaking humanitarian crisis. Britain’s Defense Ministry has reported an alarming increase in Russian air and artillery strikes on populated urban areas over the past two days, according to an AP report, confirming fears that the Kremlin has shifted much of its military aggression directly onto the Ukrainian people in an effort to break their will.

Numerous reports indicate that Russian forces have deliberately targeted residential areas, including schools, hospitals, and apartment buildings. The cities of Kharkiv, Kyiv, and Kherson are now almost completely encircled by invading forces, leading many to fear the Kremlin plans to “starve out” those who were unable or unwilling to flee.

Time Magazine recently reported that many of Ukraine’s wounded are being taken to Kyiv’s Okhmatdyt Children’s Hospital, forcing medical staff to evacuate patients with non-life-threatening needs and usher extremely ill and wounded patients down to the hospital’s basement several times a day as bombing and artillery rain down nearby. Meanwhile, corpses and abandoned cars lay scattered outside the hospital in a scene of unmitigated terror.

“The saddest thing is that when the siren sounds, we have to go down with the children and parents to the basement,” surgeon Vitaly Demidov told TIME. “We run five or six times a day in the basement and back.” Demidov said several infants and children simply cannot be moved because they are on life support.

Multiple news agencies have released videos of tearful mothers trying to sooth crying infants as they hunker down in bomb shelters and Kyiv’s underground subway station as limited supplies of medicine and basic food and water dwindle. Joining them are elderly and disabled residents physically unable to flee the carnage.

Ukraine’s State Emergency Service said Wednesday that more than 2,000 civilians have been killed over the last week, including multiple children.

“Children, women and defense forces are losing their lives every hour,” the Agency said in a statement Wednesday, according to a Fox News report.

The United Nations refugee agency and other humanitarian groups have called for donations across the globe to come to the aid of millions of displaced and suffering Ukrainians, warning that the situation is “deteriorating rapidly.”

“Families with small children are hunkered down in basements and subway stations or running for their lives to the terrifying sound of explosions and wailing sirens,” said Martin Griffiths, U.N. undersecretary for humanitarian affairs. “Casualty numbers are rising fast. This is the darkest hour for the people of Ukraine. We need to ramp up our response now to protect the lives and dignity of ordinary Ukrainians,” he continued, adding, “We must respond with compassion and solidarity.”

The International Red Cross and partner agencies say Ukrainians are in urgent need of emergency water delivery and medical supplies to treat their wounded.

The UNHCR reports that 660,000 displaced Ukrainians have fled, seeking asylum in surrounding countries. Groups of mostly women and children have endured freezing temperatures as they stand in long queues, sometimes for days, where Ukraine borders eastern Poland, Slovakia, and Hungary, with roads leading out of the country now littered with abandoned cars as they make their way on foot.