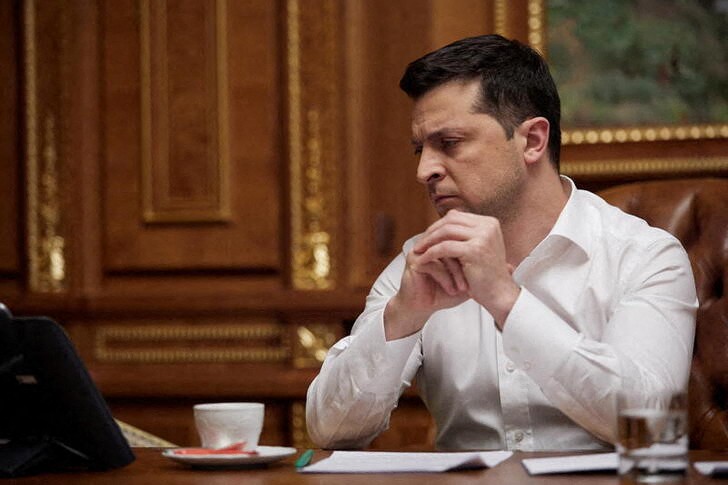 Western leadership and Ukrainian President Volodymyr Zelensky appear to be concurrently in harmony and at loggerheads over the proper way to frame the build-up of Russian troops along Ukraine’s border.

Friday, Zelensky hosted a press conference during which he criticized not only the leaders from the West nations but the Western media for stoking unnecessary alarm in his country.

“The image that mass media creates is that we have troops on the roads, we have mobilization, people are leaving for places,” Zelensky said at the conference, which was broadcast on Canadian media outlet Global News’ YouTube channel. “That’s not the case. We don’t need this panic.”

Zelensky later added, “[These] signals were sent by even respected leaders of the respected countries. Sometimes they are not even using diplomatic language. They are saying tomorrow is the war. This means panic in the market, panic in the financial sector … So how much does it cost to our country?”

But Ukraine’s allies, chief among them the United States, are faced with a challenge if they wish to strike a more hopeful tone without losing credibility. It’s hard to put anything other than a cautionary spin on 100,000-plus Russian soldiers at the Ukrainian border who could, according to all intelligence, launch an attack at any moment.

Gen. Mark Milley, chairman of the Joint Chiefs of Staff, gave one quote that exemplified the rhetorical book ends that exist for Western leaders. In about 130 words, Milley attempted to assuage concerns while still warning of the grim realities an invasion would entail.

“[Right] now, we don’t think final decisions have been made to conduct any sort of offensive operation into Ukraine by the Russians, and we firmly believe there’s still room for a diplomatic outcome here,” Milley said. “Having said that, given the type of forces that are arrayed — the ground maneuver forces, the artillery, the ballistic missiles, the air forces — all of it packaged together, if that was unleashed on Ukraine, it would be significant, very significant, and would result in a significant amount of casualties. And you can imagine what that might look like in dense urban areas, along roads and so on and so forth. It would be horrific. It would be terrible. And it’s not necessary, and we think a diplomatic outcome is the way to go here.”

Milley was joined in the conference by Secretary of Defense Lloyd Austin, who routinely doubled back to the United States’ desire to seek diplomacy rather than escalation.

“[Conflict] is not inevitable,” Austin said. “There is still time and space for diplomacy. The United States, in lockstep with our allies and partners, has offered Russia a path away from crisis and toward greater security, and the Department of Defense will continue to support those diplomatic efforts.”

Like his counterparts, Zelensky is walking a tightrope between asking for calm and addressing a real and immediate threat.

During his press conference, Zelensky acknowledged that escalation was possible but made frequent allusions to his belief that Russia will ultimately choose not to invade. Additionally, as explained in more detail by the BBC, he described Russia as a nation that took a sadistic pleasure in frightening a neighbor but was unlikely to launch a full-scale invasion.

Zelensky also went back and forth in his assessment of international leaders. He expressed particular concern that some embassies had been evacuated, but accused the Western media of having misclassified his discussions with U.S. President Joe Biden.

Zelensky and Biden have both been critical of media in recent days. Last week, Biden’s anger was aroused when a reporter in the U.S. inquired about a discussion between the President and Ukraine; then, on Thursday, Biden vehemently denied a CNN report that he and Zelensky had engaged in a tense phone call.