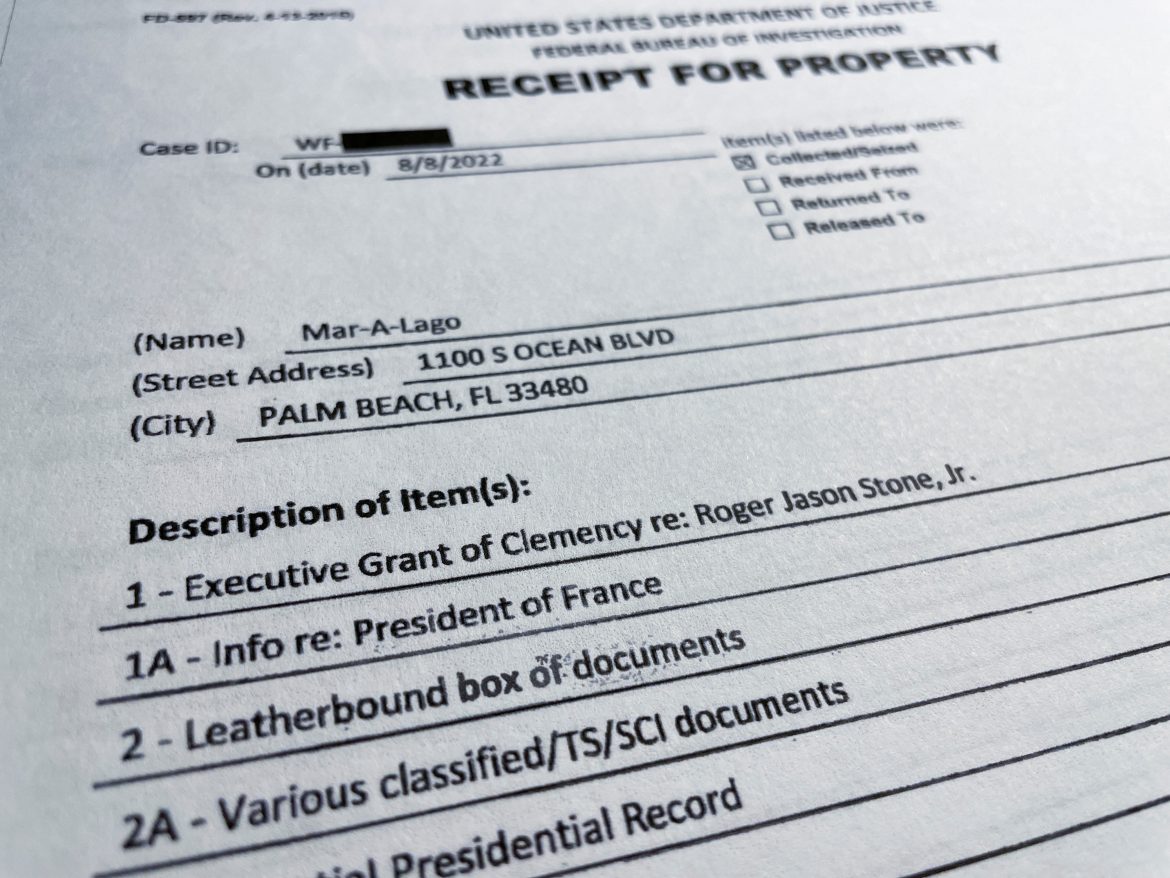 Friday, when the FBI made public the search warrant it used to conduct a raid on former President Donald Trump’s Florida home earlier in the week, it became evident that the enforcement wing of the Justice Department is angling to prosecute Trump for more than just his stewardship of presidential documents.

The warrant, a full copy of which was provided by CNBC, contains language that shows agents are seeking to establish reasonable cause to investigate, and potentially prosecute, Trump under the Espionage Act.

Among the many provisions of the Espionage Act, which became law in 1917 and was revised in the late 1940s, is language that forbids unauthorized possession of national security documents.

Importantly, the warrant contains no justification from investigators as to why they suspect Trump violated what is at its core an anti-spying law. The language of the search warrant reads only that agents were cleared to seize “All physical documents and records constituting evidence, contraband, fruits of crime, or other items illegally possessed in violation” of the Espionage Act or two federal laws pertaining to the preservation of documents.

Thursday, as reported on FISM, the Justice Department leaked that agents were also searching for documents related to the nation’s nuclear program, a claim Trump roundly denied. The warrant contained no additional information on that front, but it did provide additional, though by no means exhaustive, details of what agents confiscated.

According to the warrant, which contained an itemized list of seized items, agents took with them about 30 items, which consisted of boxes of documents, photo binders, loose documents, and notes. However, beyond identifying items as “various classified documents,” “miscellaneous top secret documents,” or similar, the itemized list provides no detail on the material gathered nor justification as to why agents felt the material was secret, top secret, or confidential.

The only items that were specifically labeled were a document relating to Trump’s clemency decision regarding political adviser Roger Stone and an item relating in some way to the “President of France.”

Trump attests that all documents in his possession were declassified (by him) and legal for him to hold in Florida.

“Number one, it was all declassified,” Trump posted on Truth Social Friday afternoon. “Number two, they didn’t need to ‘seize’ anything. They could have had it anytime they wanted without playing politics and breaking into Mar-a-Lago. It was in secured storage, with an additional lock put on as per their request.”

Trump also twice accused former President Barrack Obama of having taken classified documents to his offices in Chicago in 2017, but Trump did not indicate how he came to know this information nor did he offer specific evidence.

“President Barack Hussein Obama kept 33 million pages of documents, much of them classified,” Trump wrote in one post. “How many of them pertained to nuclear? Word is, lots!”

As reported by Axios, the National Archives denies that Obama possesses any of these documents and attests Obama has no control over their storage.

The agency says it “assumed exclusive legal and physical custody” of documents relating to Obama’s presidency upon the end of his time in office, and that it had moved more than 30 million documents, all unclassified, to a National Archives facility in Chicago while keeping classified documents in Washington, D.C.

A Moment in History: The Woodstock Festival