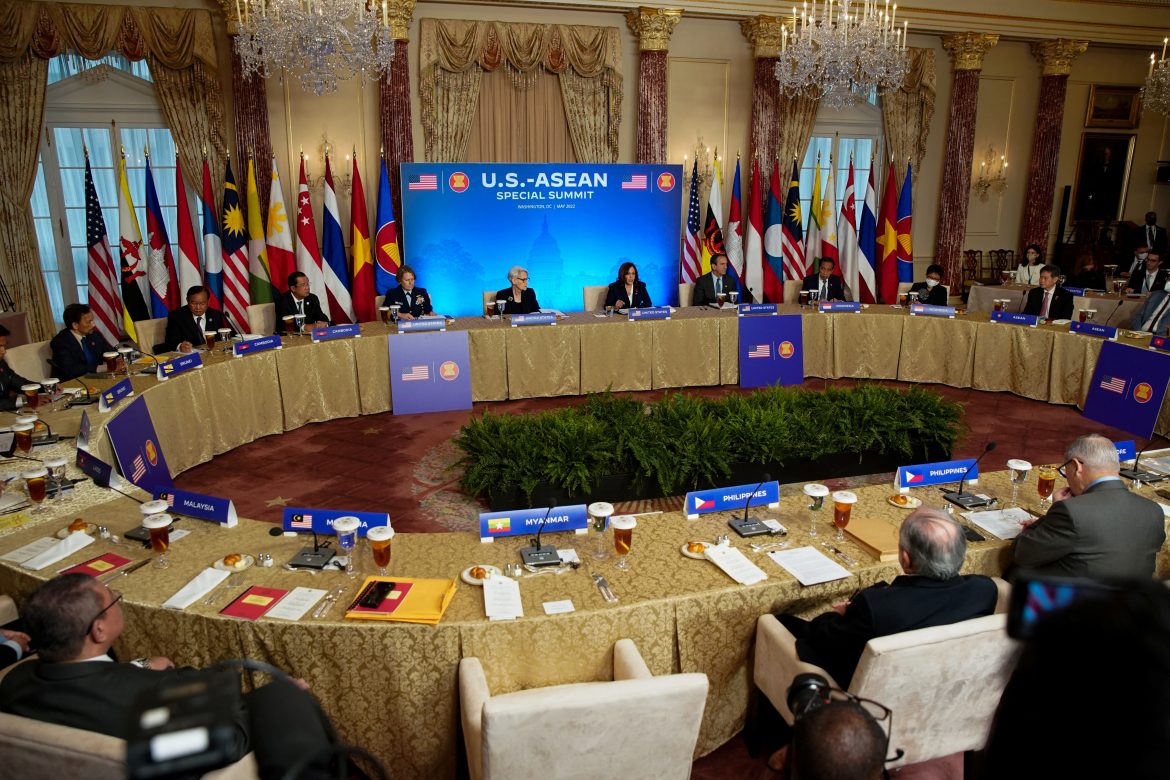 The United States told Southeast Asian leaders on Friday it would remain in the region for generations and stressed the need to maintain freedom of the seas, which Washington says is challenged by China.

Addressing a summit of the 10-member Association of Southeast Asian Nations, Vice President Kamala Harris said the region was a U.S. priority. The opening session of their meeting at the State Department on Friday would focus on maritime security and health issues, she said.

“The United States and ASEAN have shared a vision for this region, and together we will guard against threats to international rules and norms,” she said.

She did not mention China, which Washington accuses of using coercion against its neighbors, by name.

“We stand with our allies and partners in defending the maritime rules-based order, which includes freedom of navigation and international law,” she said.

“As an Indo-Pacific nation, the United States will be present and continue to be engaged in Southeast Asia for generations to come,” Harris added.

Harris said the United States would continue to respond with ASEAN to the threat of COVID-19, having already donated more than 115 million vaccines to the region.

“As long as COVID is present in any one country, it affects us all,” she said.

Harris said the conversation has been “very robust and constructive” as she opened a subsequent session on climate and clean energy.

“Together we must raise our collective ambition, accelerate the transition to clean energy and meet our infrastructure needs in a sustainable matter,” she said.

ASEAN groups Brunei, Cambodia, Indonesia, Laos, Malaysia, Myanmar, the Philippines, Singapore, Thailand and Vietnam, though Myanmar’s leader was excluded from the summit over a coup last year and U.S. treaty ally the Philippines is in transition after an election and is represented by its foreign minister.

Biden started the summit by hosting a dinner for the leaders at the White House on Thursday, and the administration promised $150 million to help improve infrastructure, security, pandemic preparedness and on other projects in ASEAN.

The Biden administration hopes the efforts will show Washington remains focused on the Indo-Pacific and the long-term challenge of China, which it views as its main competitor, despite the crisis in Ukraine.

However, U.S. spending pales in comparison to that of China, which in November alone pledged $1.5 billion in development assistance for ASEAN over three years to fight COVID and fuel economic recovery.

U.S. officials concede Washington needs to step up its game, and a person familiar with the matter said Biden was expected to announce to the ASEAN leaders his plan to nominate a new ambassador to the bloc, Yohannes Abraham, to fill a post vacant since the start of the Trump administration in 2017.

New U.S. commitments will include deployment of a U.S. Coast Guard vessel to the region to help counter what Washington and regional countries have described as China’s illegal fishing.

Biden is working on more initiatives, including “Build Back Better World” infrastructure investment and an Indo-Pacific Economic Framework (IPEF). But neither is finalized.

The summit marks the first time that ASEAN’s leaders gathered as a group at the White House and in Washington and their first meeting hosted by a U.S. president since 2016.

Russia’s invasion of Ukraine will also be on the agenda, with the United States hoping to persuade ASEAN countries to do more to push back against Moscow.

ASEAN countries share many of Washington’s concerns about Chinese assertiveness, including Beijing’s claim of sovereignty over vast swathes of the South China Sea where Vietnam, the Philippines, Brunei and Malaysia have rival claims.

But they also remain cautious about siding more firmly with Washington, given their predominant economic ties with Beijing and limited U.S. economic incentives.

They have also been frustrated by a U.S. delay in detailing plans for economic engagement since former President Donald Trump quit a regional trade pact in 2017.

At a virtual summit with ASEAN last October, Biden said Washington would start talks about developing what has since been dubbed IPEF to engage more with the Indo-Pacific economically.

However, analysts and diplomats say only two of the 10 ASEAN countries – Singapore and the Philippines – are expected to be among the initial group to sign up for negotiations under IPEF, which does not currently offer the expanded market access Asian nations crave given Biden’s concern for American jobs.