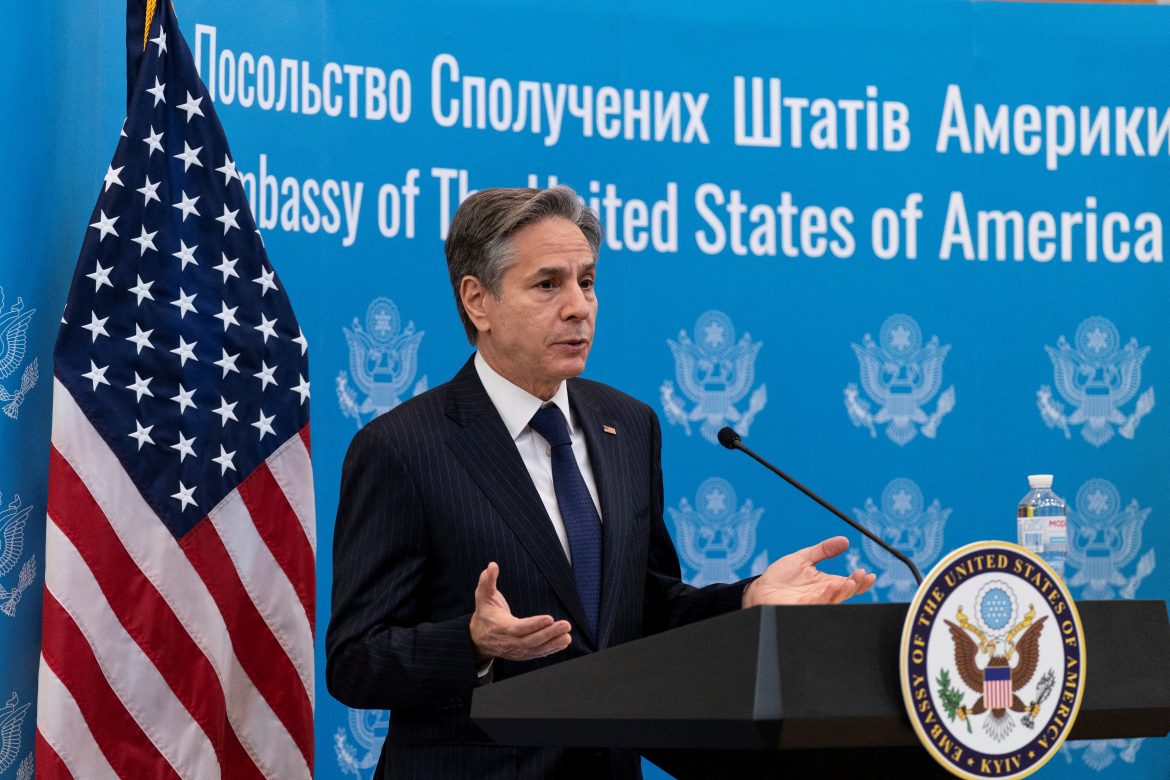 Tensions between the East and West over Ukraine continue to escalate, with the White House warning that Russia could invade Ukraine “at any point.”

Jen Psaki made the comments on Tuesday when addressing the tinder box at the Ukraine/Russia border in :

We believe we’re now at a stage where Russia could at any point launch an attack on Ukraine. I would say that’s more stark than we have been.

Psaki also said that the situation at the border was “extremely dangerous” and that “no option is off the table, in our view” in regard to consequences the U.S. and its allies may impose on Russia if it were to invade Ukraine.

It was also announced yesterday that U.S. Secretary of State Antony Blinken will travel to Ukraine Wednesday to meet with President Volodymyr Zelenskyy and Foreign Minister Dmytro Kuleba to “reinforce the United States’ commitment to Ukraine’s sovereignty and territorial integrity,” according to a Department spokesperson.

Despite high-level talks with top Western leaders, Russian President Vladimir Putin on Tuesday sent military forces and fighter jets into ex-Soviet Belarus, its shared neighbor with Ukraine. The Kremlin’s increasingly hostile rhetoric and build-up of roughly 100,000 troops and military hardware at Ukraine’s border has stoked Western fears that Putin is poised to invade the self-governing country.

Belarus President Alexander Lukashenko has announced that Belarusian troops will join their Russian counterparts in combined military drills near the country’s western rim, which borders NATO members Poland and Lithuania, and at its southern border with Ukraine. The dictator says the “Allied Resolve” drills are “normal exercises” designed to rehearse repelling an external attack.

“Set an exact date and let us know, so we aren’t blamed for massing some troops here out of the blue, as if we are preparing to go to war,” he told top military officials, according to Reuters. “These should be normal exercises to work out a certain plan for confronting these forces: the West, the Baltics and Poland, and the south – Ukraine,” he said in comments carried by state media.

The U.S. has warned Lukashenko that Belarusian involvement in a Russian war against Ukraine could spell an end to his regime.

“I believe Belarus’ complicity in such an attack would be completely unacceptable to Belarusians and to many inside the regime, as well as to us and our allies and partners,” a senior State Department official told reporters. “And we’ve made our concerns known to the Belarusian authorities privately.”

Lukashenko has been in power in the former Soviet state, which the Kremlin views as a buffer to the West, since 1994. Ties between the two countries were strengthened during mass protests that erupted in 2020 over Lukashenko’s claim of victory in a hotly-contested election that resulted in sanctions from the West. NATO allies regard Belarusian security services as a Russian asset.

Moscow, meanwhile, continues to deny an impending Ukraine invasion as Putin increases pressure on the West to provide formal guarantees blocking further NATO expansion and permanently barring Ukraine from joining the military alliance. The Kremlin also doubled down on its narrative that Russia is not responsible for rising tensions by pointing to reports that Estonia is prepared to host up to 5,000 NATO troops.

“It’s exactly things like that which prove we have grounds to be concerned and it proves we’re not the reason for escalating tensions,” Kremlin spokesman Dmitry Peskov said. Asked to comment on a senior Russian official’s refusal to confirm or deny whether Moscow could deploy missiles in Cuba or Venezuela, should the West refuse to give in to Russia’s demands, Pskov responded: “For Latin America – we’re talking about sovereign states there, let’s not forget that. And in the context of the current situation, Russia is thinking how to ensure its own security.” Pskov added that Moscow is “reviewing different scenarios.”