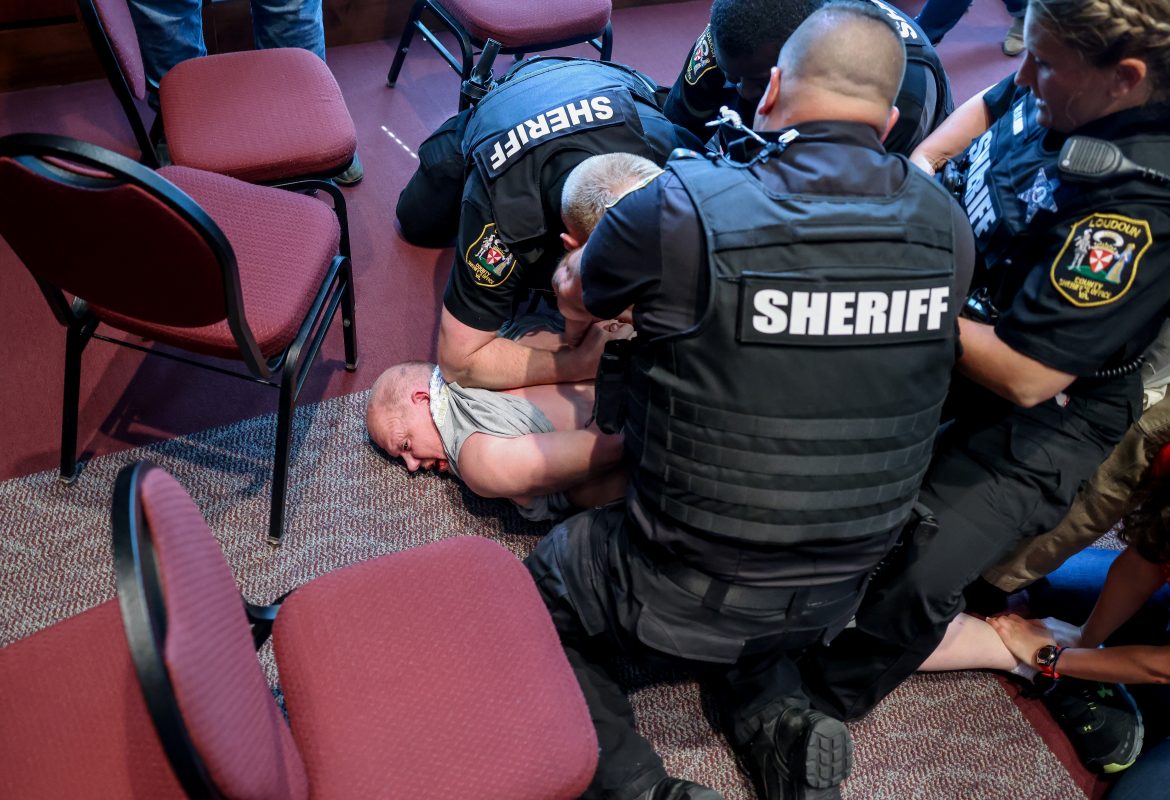 The nationwide push for the transgender agenda in schools has reached new levels of insanity after Scott Smith, a local plumber and father in Loudoun County, Virginia, was arrested at a school board meeting after getting into a heated exchange concerning the alleged rape of his daughter.

According to an investigative report from The Daily Wire, Loudoun County had recently seen a switch in their political atmosphere from generally Republican to extremely progressive. The Wire writes, “progressive activists won public office in Loudoun with as little as 51% of the vote” in their local elections back in November of 2019, and it was then that “they began using formerly apolitical institutions, such as schools and courts, as weapons in a nakedly partisan quest for power.”

Multiple progressive activists began to secretly plot ways to advance far-left agendas in schools, without pushback from parents. A school board member who was voted into her position in the 2019 election even set up a Facebook group with the goal of outing parents who questioned school board policies. A member of this Facebook group was attending the infamous school board meeting and was a part of the heated exchange that led to Smith’s arrest.

One of the ways the school pushed its progressive agenda was by introducing a transgender protection plan.

Smith asserts that he attended a school board meeting out of concern that students would continue to use the transgender policy as an excuse to enter opposite-sex bathrooms and do awful things, like what happened to his daughter. The exchange became understandably heated when Smith was not given a chance to address the board and a woman claimed the rape didn’t happen.

The video of the incident has been used by progressives as evidence of parents acting like “domestic terrorists” at school board meetings. However, they have used the video without mentioning any of the surrounding circumstances that led to Smith’s outburst.

In May of this year Smith said he was summoned to the school because “his 15-year-old daughter had just been physically assaulted in a bathroom by a male,” according to the Wire. Smith said the situation was worse than what the school portrayed; he claims a boy who was wearing a skirt entered the girl’s bathroom and sexually assaulted his daughter.

The school did not give much detail to Smith, only saying it was handling the situation in-house. Smith made a scene out of frustration with the school, and the school called the police on him.

The school superintendent then sent an email to the community which described “an incident” involving Smith but did not mentioning the assault or alleged rape of his daughter.

A rape kit was tested on the daughter later which lent “favorably” to a case against the suspect. Prosecutors met with the boy who “made self-incriminating statements in an interview” and from that “a conviction was expected imminently.” Smith commented favorably on the possibility of a plea deal with the boy, making his sentence less harsh than the initial charges. Smith appeared to place more of the blame on the school board policies that allowed the assault to occur, then he did on the boy himself.

The incident led Smith to attend the school board meeting which resulted in his detainment for disorderly conduct and resisting arrest. His charges were dropped before the top prosecutor in the county, also a progressive, sought jail time for Smith. He was still found guilty of a lesser sentence and forced to pay a small fine and given 10 days of suspended jail time reliant on his ability to exhibit “good behavior” for the rest of the year.

The case for the young man who allegedly raped Smith’s daughter was expected to be resolved with the plea bargain on October 14. However, the same boy was charged with sexual battery involving a different girl in the same school on October 6. He was placed in juvenile detention, and his court date has been moved to October 25 to handle both this new charge and the one against Smith’s daughter.

Despite the evidence that the transgender “protection” policy promoted violent assaults, the liberal school board voted it in to practice on August 11 of this year.